The impact of AUB’s transition to a dollarized financial model 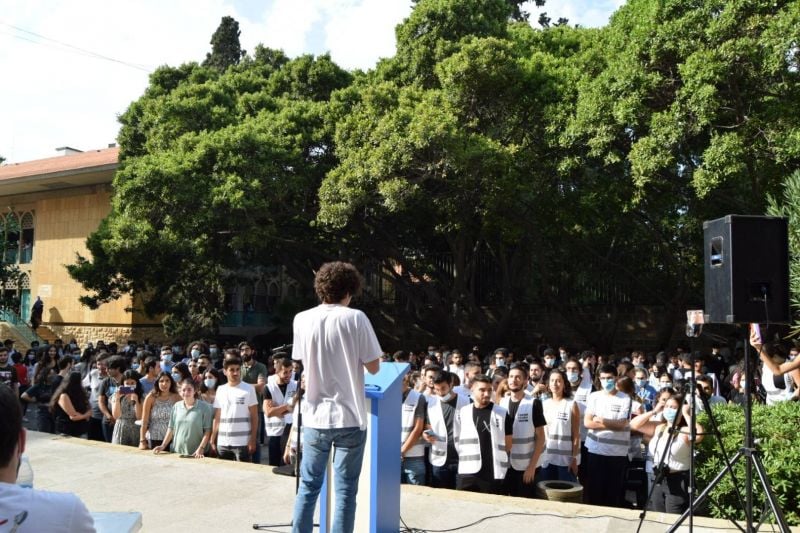 Outlook hosted a debate before the student representatives’ elections near the AUB's West Hall in Oct. 2021. One of the debate’s topics was the issue of tuition dollarization. (Credit: Zeina El Zomor)

“That they may have life and have it more abundantly.” As the motto of the American University of Beirut suggests, over the past 150 years, a degree from AUB has been seen as a sure path to success and financial security, its graduates often emerging as leaders in their respective fields. The price tag for that golden ticket has always been out of reach for a large portion of Lebanese society, but for those who can afford it, the cost has only gotten heftier in the past three years.

On May 18, AUB president Fadhlo Khuri announced that the university would start collecting tuition fees strictly in “fresh” US dollars beginning in the fall 2022 semester. The final decision, which had been debated since March, heralded an adjusted financial reality that has required a radical change in some students’ academic plans as the beginning of the school year looms on August 28th.

For some, it has meant bending over backward to secure an AUB degree, while others have decided to alter their plans altogether in pursuit of affordable alternatives.

An aspiring doctor, Mohamad Alqassab, graduated from AUB’s pre-medical track with a Bachelor of Science in chemistry this past spring and applied to the university’s renowned medical school. Four years of grueling work for an undergraduate degree, endless hours of preparation for the medical college admission test (MCAT), and a tailored resumé of professional and volunteer experience secured Alqassab a coveted spot in the program.

However, unable to come up with the funds to pay the tuition in dollars, now he has had to turn down a seat at his dream school for another within his financial reach.

Alqassab is one of many promising graduates suffering the repercussions of the university’s adjusted financial model, which relies on dollarization as a safety net against Lebanon’s ongoing economic collapse. Like many of his peers, the young graduate received a partial financial aid package of 60 percent, which didn’t come close to meeting his financial needs, with graduate tuition at the Faculty of Medicine amounting to $1,031 per credit. Ultimately, he turned to the University of Balamand as an alternative for his graduate studies.

“Knowing that Balamand’s tuition is only 27 percent in fresh dollars makes it a more viable option,” Alqassab said.

The AUB enrollment statistics and management unit has yet to share any enrollment figures for the 2022-2023 academic year, and university officials did not respond to requests for comment on the impacts of the tuition policy on the school’s enrollment. 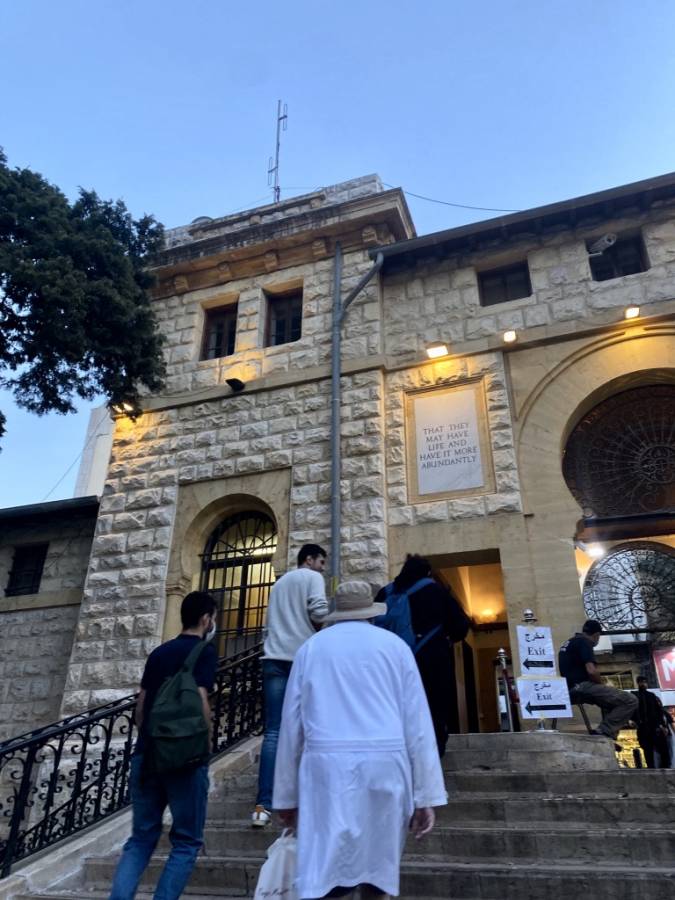 However, data published from the 2021-2022 academic year showed that the number of newly enrolled students dropped by 525 from the year before (from 8,657 to 8,132, a six percent decrease), suggesting that some students already found the tuition out of reach before the fees were fully dollarized.

As Lebanon's local currency began slipping in 2019, losing more than 90 percent of its value on the parallel market, AUB adjusted its tuition rates in fear of meeting the very fate of the nation’s economy: a complete meltdown. The student body met the gradual tuition adjustment — from the official LL1,500 rate to the “lollar” or “local dollar” rate of LL3,900, and then LL8,000 — with disgruntled protests.

After several meetings with student representatives and open town hall meetings between March and May 2022, Khuri announced that the university would transition to collecting tuition strictly in fresh dollars with the start of the 2022 fall semester.

“It has become necessary for AUB to collect tuition fees in the same currency in which it must pay its expenses,” wrote Khuri, explaining that the university had been operating at a loss totaling $134 million for the past three years.

Undergraduate students who enrolled before the tuition dollarization are now relying more heavily on internal and external aid to finance the remainder of their time at AUB.

Sarah Sabra, a sophomore at the Faculty of Arts and Sciences, received an additional 40 percent aid package, which the university approved as part of their “extraordinary measures to maintain AUB’s academic and clinical excellence.”

Nevertheless, even with the scholarship, Sabra will still struggle to settle the remaining balance of $6,000 in tuition fees. She said she is looking for external scholarships and thinking of overloading on academic credits to fast-track her way through her B.A. in political studies.

“I’m considering overloading my semester with 18 credits instead of the regular credit load since you only pay for the first 15 credits either way,” she said.

The university’s plan to ease the students into the financial model’s transition includes “a five-year increase in annual student financial assistance from $71 to $90 million and the provision of $150 million over three years,” announced the chairman of AUB’s board of trustees, Philip S. Khoury, on June 6.

Meanwhile, as the likes of Northwestern, Georgetown, New York University, and Carnegie Mellon invest in regional Middle East campuses, AUB has seemingly shifted its resources to focus on expanding to a state-of-the-art campus in Cyprus, although the university officials have insisted that the expansion does not mean they are abandoning the “mothership” in Beirut.

On the other end of its classrooms, AUB’s new financial model has apparently alienated a cornerstone of its faculty: part-time lecturers. Part-time instructors, who make up 23 percent of all teaching staff at AUB and are often simultaneously working professionals, enrich AUB’s diverse educational curricula by relating theoretical textbook knowledge to practical aspects of the job market.

As the university transitioned to collecting tuition fees at a higher lira-per-dollar rate in 2021, it dollarized a portion of its full-time faculty’s salaries. Part-time instructors, however, continued receiving their paychecks at the adjusted lira rate.

Prior to resigning from the architecture department at AUB at the end of 2021, a former lecturer told L’Orient Today that the work had grown challenging as the Lebanese economic crisis worsened. The former lecturer asked not to be named for fear of jeopardizing professional relationships. Part-time instructors rallied to demand fair remuneration, only to meet a moralistic response touting the virtue of patience, coupled with a handful of empty promises for a better tomorrow, he said.

“The hard-lived reality of part-timers, the transportation costs and underpaid heavy workload did not seem to be on our administration’s list of priorities,” the former lecturer, who is also an AUB graduate, said of the tough decision to resign from his alma mater.

And as part-time lecturers have migrated towards higher paying avenues of employment, some of the university’s programs have been forced to downsize the number of sections for core courses and drop various appealing electives.

“Our working conditions directly impact your learning conditions” stated the Part-Time Faculty Alliance (PARTA) in a December 2020 open letter to their students detailing their grievances with AUB’s decision-makers.

This article has been updated to remove a quote containing an allegation that was not substantiated.

“That they may have life and have it more abundantly.” As the motto of the American University of Beirut suggests, over the past 150 years, a degree from AUB has been seen as a sure path to success and financial security, its graduates often emerging as leaders in their respective fields. The price tag for that golden ticket has always been out of reach for a large portion of Lebanese...