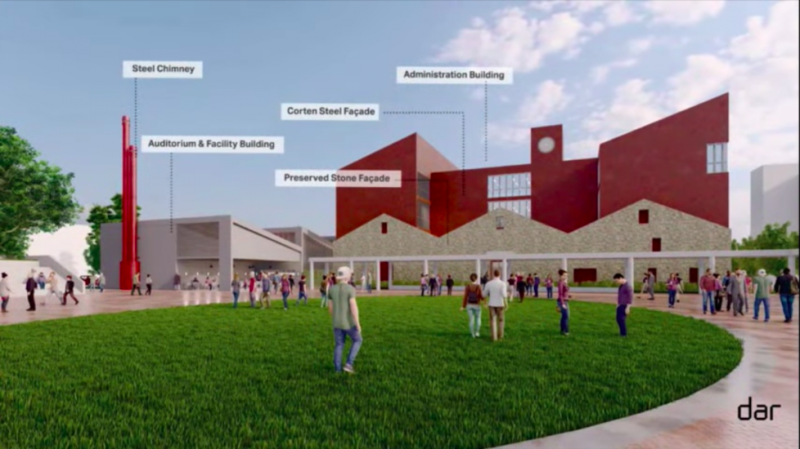 A rendering of the American University of Beirut-Mediterraneo, including architectural references to the College Hall clock tower, unveiled Friday, April 8, 2022, at a ceremony in Paphos, Cyprus. (Credit: Screenshot from launch ceremony presentation)

It was attended by a number of dignitaries, including the President of Cyprus, Nicos Anastasiades, US Assistant Secretary of State for Educational and Cultural Affairs, Lee Satterfield, AUB President Fadlo Khuri and the US Ambassador to Cyprus, Judith Garber.

During the ceremony, renderings and designs of the campus were unveiled, and Paphos' Mayor Phedonas Phedonos said that the establishment of AUB in ths city is “a beacon, a milestone, as it opens a new path of progress, of creation, and of prospects.” He added that the arrival of AUB “cannot be compared with any other event in the history of the city.”

University President Fadlo Khuri also spoke at the ceremony, saying, “In order to serve a broader audience we have to become a more global and diverse and inclusive American University of Beirut.” He  added that AUB is aiming to eventually have a presence in Africa and on the Arabian peninsula.

While the opening of more campuses outside of Lebanon appears to be part of the university’s survival strategy, as the supply of US dollars has dried up at home, AUB’s Vice President of Advancement Imad Baalbaki told L’Orient Today that the idea behind the twin campuses arose in 2019, before the Lebanese financial crisis, as part of AUB’s global strategy.

“We've been working on this for about a year and a half with authorities in Cyprus, and particularly with the mayor of Paphos, and the municipality of Paphos,” he said.

The news was made public last week by Phedonos in a press conference, but the response in Lebanon was mixed. Many asked how AUB could afford the project, given the financial situation in Lebanon. Some felt as if AUB was abandoning Lebanon. Others questioned how Lebanese students would be able to study in Cyprus given visa restrictions, while some did not like the location chosen all together.

According to AUB’s 2021 external audit, the university took on a $50 million loan in August 2021, and its net assets are just over $1.9 billion, 32 percent of which are in Lebanon. However, its liquidity stands at around $179.8 million, a drop of nearly $88.7 million from 2020, and it has around $51.3 million stuck in Lebanese banks that are subject to de facto capital controls, which can only be withdrawn at an exchange rate that would incur a financial haircut.

AUB’s strategy has two components: One, to have a larger presence online, in addition to the online degrees they offer, and two, according to Baalbaki, “to re-emphasize its regional role, and its global presence” in the form of establishing campuses outside Lebanon. At least one more is currently in the works, in Dubai.

To do this, the university partnered with the Albright Stonebridge Group, a Washington-based business strategy group founded by former US Secretary of State Madeleine Albright, to find the best location for these twin campuses based on “an objective assessment of the economic and social and educational ecosystem.”

Baalbaki said that after looking at more than a dozen locations in the region, they settled on the city of Paphos, Cyprus, located on the south-western end of the island and home to around 36,000 people, because it is a major tourist destination and because of the city’s willingness to engage with and support AUB’s mission.

Additionally, Paphos is currently attracting investment as it works to turn itself into a “smart city,” or one that implements new technologies to maximize its economic output. City planners contend that educational facilities are a key component of smart cities, as they produce talent that provides a workforce for companies already present, and attracts others who are looking to move. Businesses can also utilize the research that universities produce. As Baalbaki put it, “here was a marriage of vision,” that received the blessing of the President of Cyprus and the Mayor of Paphos.

Another attraction of Cyprus, Baalbaki said, was that it is part of the European Union, while also being close to Lebanon, and being on European soil, could open up opportunities for EU research grants to faculty members.

The site chosen to house the new campus is a 10,000-square-meter lot on government-owned land in the center of the city that was originally a carob mill. Through adaptive reuse, AUB will turn it into classrooms, labs, and other facilities to house several departments including computer science, economics and business and a school of civil engineering, with the aim of accommodating more than 2,000 students. The total budget is €29 million, with work expected to be completed before the first batch of students starts in the fall term of 2023-2024.

During the signing ceremony, the architect in charge, Semaan Kfoury, said the campus will be between the center of the city and the tourism quarter. The project will preserve already existing stone walls to “maintain the memory of the place and reference to AUB’s Beirut campus.”

The design also highlights the twinning of both cities, through the use of horseshoe arches and a clock tower, a reference to the historic Beirut campus. Additionally, the public will enjoy open access to university grounds.

Baalbaki said that the site, which is being leased from the government, has been abandoned for a lengthy period of time. The plot and the complex are under a “highly subsidized lease,” as part of the support AUB is receiving from the Cypriot government and from the municipality, he said.

He said that AUB is looking at leasing the lot facing the future campus, which would add an additional 7,000 square meters to the project. The additional plot is part of the campus master plan being drawn up by architecture firm Dar al-Handasah. 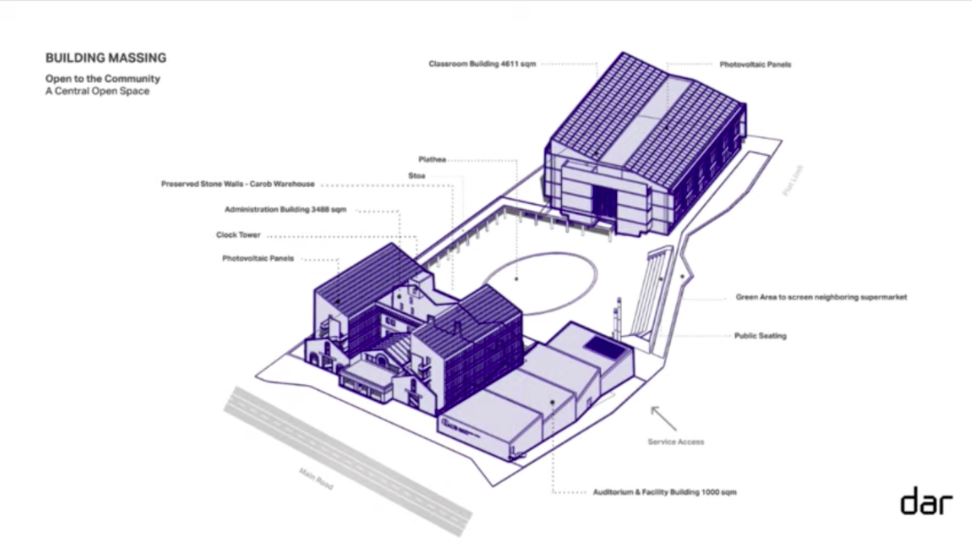 A drawing of the American University of Beirut-Mediterraneo, unveiled Friday, April 8, 2022, at a ceremony in Paphos, Cyprus. (Credit: Screenshot from launch ceremony presentation)

Last week, Mayor Phedonos said the plot “will soon be granted” to AUB by the government. Kfoury said this plot will be part of phase two, and house offices and classrooms.

The terms of the agreement between AUB and the City of Paphos were made public at the signing ceremony on Friday. It stipulated the “granting of a license to use the land to create the infrastructure of the new university under the name the American University of Beirut—Mediterraneao. The agreement is valid for 33 years and includes a right of renewal for two more equal time periods, the investment of at least €29 million for the development and operation premises with an inauguration year [of] September 2023.”

Funding for the new campus is being sourced partly by philanthropy and through public and private sector partners, with the government of Cyprus chief among them.

The campus will be located on Apostolos Pavlos avenue. The choice did receive some backlash on social media, with some alleging that it will be close to the Israeli-owned Paphos Innovation Institute. In response to this criticism, Baalbaki said “it's in the same city but it's not next door.” According to Google Maps, the two campuses are three kilometers apart.

The idea of the new overseas AUB facilities being twin campuses, as opposed to branches, means that students and faculty can move between Beirut and Paphos for courses and teaching. As for the tuition, Baalbaki said since Beirut and Paphos will be regarded as twin campuses, “it's the same standards” and “the same approach, in terms of the cost.” This, according to him, means the same admission criteria, meaning that a student who applies to Beirut also gets accepted in Paphos and vice versa.

“Any student in Beirut [would] be able to take a semester, a course, whatever, in any campus. Also, we want students who are there to come to Beirut to live the experience that you guys live here,” Baalbaki said.

AUB will be hiring faculty in Cyprus, but they can “also teach here [in Beirut],” he continued. Baalbaki noted that AUB had to take into account EU degree requirements that stipulate that courses need to be four credits, instead of the American system, which has most courses at three credits only.

“So, we have to make the adjustment for each and every course that we're going to give there so that it also matches not only the American credit system, but also the European credit system.”

Baalbaki noted that he raised the issue of student visas for Lebanese nationals with Cypriot authorities, and said he was given assurances that they would facilitate visas for AUB students.

AUB is looking at opening a campus in Dubai, and Baalbaki noted that discussions on this are in an advanced stage. Though this will be the first overseas satellite campus, AUB has helped to establish universities abroad before, especially in the Gulf, the most notable example being the American University of Sharjah, which opened in 1997.

Baalbaki, who was involved in the project, recalled that it was the ruler of the Emirate of Sharjah who wanted AUS “built along the American University of Beirut model, and this is why he contacted us.” AUB did the same in other locations, including in Oman and Bahrain.

While Cyprus will be the first overseas campus, AUB did briefly have a second campus in Lebanon via its Off Campus Program that essentially served as a campus in East Beirut for students who could not reach Ras Beirut during the Civil War. That location was open from 1976 to 1990 and hosted around 800 students.

Baalbaki noted that the major challenge of opening this new campus lies in the price structures of other countries for their academic offering, and also in the ability of the residents of both countries to pay. “But this can be handled through other means … you know, how [if] the academic talent does not have the financial means, we have financial aid.”

As for the accusations that AUB is abandoning Beirut, he insisted that this perception is false: “This is our mother ship,” he said.

The author of this article, Mohamad El Chamaa, is currently a master's student at the American University of Beirut.

BEIRUT — On Friday, Cypriot officials and their counterparts at the American University of Beirut officially announced the launch of a twin AUB campus in Paphos, Cyprus, named the American University of Beirut-Mediterraneo.The signing ceremony took place at the Markidio Municipal Theater of Paphos Friday night.It was attended by a number of dignitaries, including the President of Cyprus, Nicos...