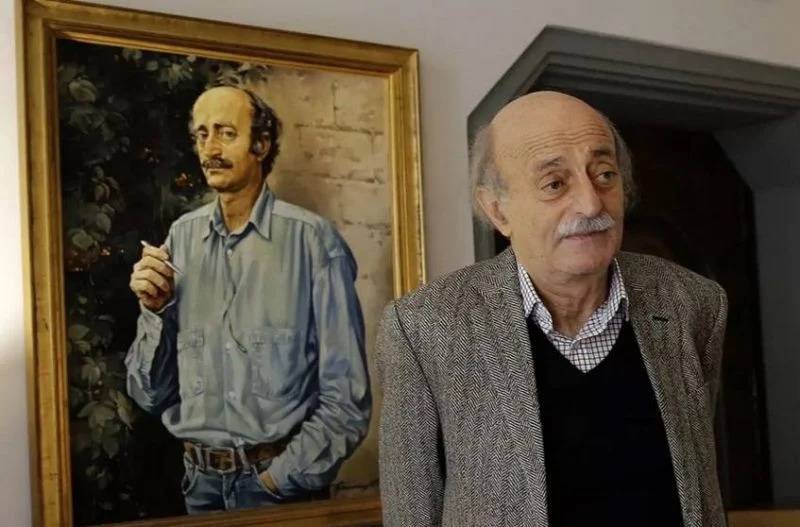 Walid Joumblatt, the leader of the Progressive Socialist Party, is obsessed with geopolitics. He is likely the Lebanese leader who is most interested in such calculations and also the one who adapts his positions the most according to geopolitical developments.

And with all the changes unfolding in the region, Joumblatt appears to have enough to keep him busy.

Between the Iranian nuclear negotiations, the war in Ukraine, the discussions between Saudi Arabia and Iran and, on a more local level, the issue of the maritime border demarcation with Israel, geopolitics is making a comeback, and the region is once again on the verge of tipping into either escalation or compromise.

In both cases, Joumblatt seems to have considered that it was time to take a step toward Hezbollah. The Druze leader has been making repeated calls for this move lately.

When Archbishop Moussa al-Hage was arrested last month in Ras al-Naqoura, Joumblatt called on the leaders of the former March 14 camp to deal with the issue calmly, for the judiciary to do its job and for any alleged aid from Israel to be rejected, regardless of who it was intended for, even if it was destined for the Druze community.

This rhetoric was the first sign of rapprochement with Hezbollah.

A few days later, Joumblatt did not close the door to supporting Marada leader Sleiman Frangieh’s candidacy for the presidential elections, despite having clearly stated several days before the May 15 parliamentary elections that he would not lend his support to Gebran Bassil or Frangieh, both of whom are endorsed by Hezbollah.

However, it was in an interview on Monday with the Jordanian channel al-Mamlaka that Joumblatt truly reached out to the pro-Iranian party.

Asked about the possibility of a war between Hezbollah and Israel, Joumblatt seemed to understand the party’s military concerns and said he would stand by the party should the situation deteriorate.

Regarding the party’s weapons and the maritime border demarcation dispute, Joumblatt justified Hezbollah’s launching of drones in the Karish field as a response to Israeli drones violating Lebanon’s airspace and as an attempt to exercise pressure in the maritime border talks.

And regarding Lebanon’s disassociation policy in relation to regional conflicts, Joumblatt rejected neutrality and said it could not be applied amid the presence of an “ambitious Israeli enemy on the borders,” distancing himself from the proposals of the Maronite Patriarch Bechara al-Rai and the leader of the Lebanese Forces, Samir Geagea.

This stance could leave its mark on the ex-March 14 camp and greatly impact the upcoming presidential elections.

In the same interview on Jordanian television, Joumblatt said he would be meeting with a Hezbollah delegation in the coming days — something that was planned two weeks ago between the Druze leader and Wafic Safa, the head of Hezbollah Coordination Committee.

According to information obtained by L’Orient-Le Jour, the meeting is expected to be held either Thursday or Friday.

In addition to Safa, Hussein Khalil, political advisor to Hezbollah leader Hassan Nasrallah, is expected to be present at the meeting.

“[Parliament Speaker] Nabih Berri has played as always the role of intermediary in this development,” according to an advisor to the Parliament speaker.

L’Orient-Le Jour has learned that the meeting between Joumblatt and Hezbollah will be more focused on technical rather than political issues.

The PSP leader reportedly wants to gauge Hezbollah’s position on the negotiations with the International Monetary Fund and on the possibility of taking the Energy Ministry out of the hands of the Free Patriotic Movement.

The presidential elections, however, are likely to be at the heart of discussions between the two sides.

Frangieh seems to be Hezbollah’s candidate for the moment, even if it has not yet officially endorsed him.

But in order to obtain the two-thirds majority needed for an election in the first round, or for a quorum in subsequent rounds, Hezbollah will have to look for votes beyond the ranks of the former March 8 camp.

“The president cannot be elected without an agreement with Hezbollah,” a source close to Joumblatt told L’Orient-Le Jour. “So, we have to agree on a consensus name.”

The PSP leader supported Frangieh in 2016, before the election of current President Michel Aoun, who then took advantage of Geagea’s change of heart.

“Joumblatt does not want to be fooled this time. He decided to act beforehand,” a close associate to the Druze leader said without elaborating further.

Back in 2013, Joumblatt agreed with Hezbollah to allow the appointment of Tammam Salam as prime minister. Today, he seems to be following the same logic.

“Joumblatt does not talk to Aoun and Bassil. He is obliged to start a dialogue with Hezbollah so that an agreement can be reached for the presidential elections,” the close associate said.

Is Joumblatt trying to anticipate an escalation or a regional compromise?

In PSP circles, things are not yet clear, and the Druze leader is watching events closely.

“Joumblatt must keep up with the changes in the region. If there is a nuclear agreement or if there is a conflict, he cannot be isolated,” said a PSP MP who requested anonymity.

“He wants to avoid a new May 7,” the MP added, referring to when Hezbollah and its allies invaded parts of Beirut and the Aley and Chouf areas in 2008.

For Hezbollah’s opponents in the Lebanese Forces, Joumblatt’s positions are unacceptable.

Although it is not the first time he changes positions, the Druze leader is counted among the anti-Hezbollah camp seeking to elect a president outside the party’s influence.

With Joumblatt in, electing a president without Hezbollah’s approval appears to be difficult. But without him, it is simply impossible

“Joumblatt speaks like Hassan Nasrallah,” said a March 14 figure who says that the Druze leader has weakened his own camp.

Joumblatt has placed himself in a position where he can tip the balance to one side or the other.

But for the PSP leader, and according to his own words, he only seeks to find a compromise and a consensus candidate to avoid any confrontation, which is why he extended a hand to Hezbollah and will do the same with other political players in the future.

“If he succeeds in this mission, he will be the patron of a compromise,” the close associate said.

Joumblatt seems to want to follow in his father’s footsteps.

In 1970, during the presidential election, Sleiman Frangieh (the grandfather of today’s Sleiman Frangieh)won by one vote over Elias Sarkis. It was the vote of Kamal Joumblatt.

The outcome of this deal, however, was disappointing. Then the war broke out, prompting Kamal Joumblatt to galvanize efforts to get Sarkis elected so he could manage the crisis. Indeed, the latter took office in 1976.

“The meeting [this week] with Hezbollah will not end all our differences with Hezbollah, but rather aims to neutralize the strategic dispute on political orientations,” Joumblatt’s close associate told L’Orient-Le Jour.

“Hezbollah does not come from Mars, but rather was born of Lebanese circumstances following the Israeli invasion of Lebanon and represents a large component of the Lebanese,” Joumblatt said in his recent interview with al-Mamlaka, the Jordanian television station.

“Any elected president must establish a program that includes a way to start a dialogue with Hezbollah, and later give priority to how the state can integrate the party’s weapons into the defense strategy of the Lebanese state,” he added.

Walid Joumblatt, the leader of the Progressive Socialist Party, is obsessed with geopolitics. He is likely the Lebanese leader who is most interested in such calculations and also the one who adapts his positions the most according to geopolitical developments.And with all the changes unfolding in the region, Joumblatt appears to have enough to keep him busy.Between the Iranian nuclear...