This pessimistic outlook, published in a recent report by the Institute of International Finance, is what could happen if Lebanon’s political class continues choosing to maintain the status quo. 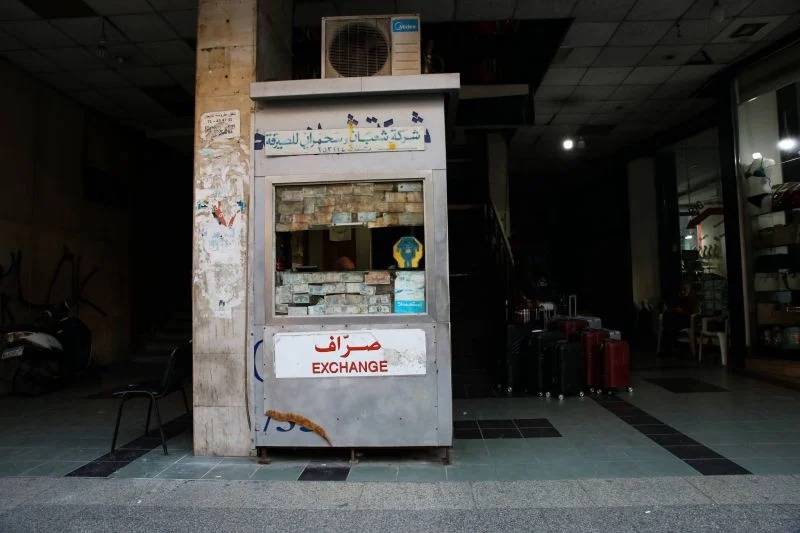 A currency exchange office in the Hamra district, the former financial artery of the Lebanese capital. Florient Zwein/Hans Lucas

The very first lines of the report set the tone: authorities in Lebanon “have again placed their own personal interest above the needs of the country.”

The Institute of International Finance (IIF), which brings together several hundred major banks around the world, has at times erred towards optimism in its analyses of the Lebanese situation. However, in its latest report published this month, written under the direction of IIF chief MENA economist and former IMF executive Garbis Iradian, the institute does not mince words.

Apart from the sobriety of its title — “Lebanon: Mounting Challenges” — the critical tone of the study betrays the exasperation of its authors at political leaders who have missed opportunities to reform the country in the nearly three years of crisis, allowing the financial situation to worsen. In a potential worst-case “pessimistic scenario” that IIF forecasts in its report, continued political stalemate will lead Lebanon to “disintegrate,” pushing the exchange rate to more than LL 110,000 to the dollar (nearly four times the current rate) by the end of 2026.

Such is the worst-case scenario against which IIF presents its "optimistic" counterpart: potential economic recovery of Lebanon in a few years, provided that authorities carry out their mission to enact urgent economic reforms and finalize their agreement with the International Monetary Fund by the end of 2022. Lebanon and the IMF already signed the agreement in draft form on April 7, a preamble to a possible financial assistance package to the tune of $3 billion over four years. However, this check is far from blank, given the list of reforms the Lebanese government must carry out in order to see the agreement through.

Conditions of the IMF agreement

Among these preconditions, only one was adopted by Parliament during its session last Tuesday: amendments to the bank secrecy law in force since 1956. MPs granted the right to lift bank secrecy to three new entities, in addition to the Special Investigation Commission (SIC, independent but chaired by Banque du Liban governor Riad Salameh). At the same time, however, they neutralized the move by not also amending Law No. 32, which grants this right exclusively to the SIC.

This failure should be corrected “in early August,” Ibrahim Kanaan, chairman of the Finance and Budget Committee, told L’Orient-Le Jour. He described the bank secrecy amendments as “a necessary transparency measure to boost confidence.” Such confidence is the foundation of any future economic recovery, IIF notes in its report – recovery for which Lebanon still has all the “elements for success,” including “its rich human capital and entrepreneurship, large diaspora and strategic location.”

But all this will remain wishful thinking unless “there is a political will” to undertake the required reforms, the report says. That is where the problem lies, as none of the other conditions given by the IMF have yet been met. According to IIF, some conditions must be “implemented without further delay and irrespective whether a new cabinet is formed,” at which point Prime Minister Najib Mikati, who resigned since the legislative elections in mid-May, could theoretically sign the final agreement with the IMF.

The IIF report includes a list of the reforms the institute considers essential:

- Approve a 2022 budget: Lebanon must break out of its habit in which it “delays or never approves budgets” annually, and must encourage decision-makers to take on the responsibility of performing their fiscal duties in a timely manner.

- Capital controls: this law should help “rebuild official reserves” and the stability of external finances.

- BDL audit: without this audit, including “arrears of the government incurred by the Ministry of Finance,” there will not be sufficiently solid data to “build a meaningful medium term macroeconomic framework,” IIF insists.

- Bank restructuring law: a restructuring of the banking sector is needed to create a “smaller, leaner and healthier banking system.” All institutions should be “audited to determine which are solvent” and deposits should be retained to restore confidence in the sector.

- Exchange rate unification: the adoption of a floating exchange rate will help balance supply and demand, restore market stability and support investment and growth. The IIF reports that this will also, among other things, “minimize rent-seeking activities that increase risks of corruption.”

- Modernizing the fiscal and budgetary framework in the medium term: with a four-year timeline, this framework would ensure “debt sustainability,” include “civil service reform” and prioritize “expenditures to support infrastructure and social services,” as well as modernizing fiscal policy to generate “additional revenues that can be allocated.”

The IIF report also stresses the importance of restructuring public entities such as electricity providers, telecoms and water networks and port infrastructure. “The authorities should consider privatizing and regulating these utilities,” IIF advises, based in particular on public-private partnership and with the help of the World Bank. Finally, the IIF also points to the need to improve Lebanon’s national statistics collection system, “one of the weakest in the region,” despite being “key to effective policies” and economic analysis.

Based on all of these recommendations, the IIF then unveils two possible scenarios for the year 2023 and beyond: one optimistic, and one pessimistic.

Assuming those reforms are implemented and the IMF agreement is finalized following the presidential election in October, the IIF report predicts real GDP growth (without accounting for inflation) to accelerate to six percent in 2023 and eight percent the following year. This growth would result from increased consumption, public investment and exports, according to the report. IIF also expects the inflation rate, estimated by the Central Administration of Statistics (CAS) in July at 210 percent, to “gradually decline to lower double digit levels” over a two-year period (2023-2024) and then to single digits afterward (2025-2026). That projected decline is thanks in particular to “appreciation of the unified exchange rate and lower global commodity prices.”

Meanwhile, the budget could increase considerably thanks to the rise in government revenues, which the IIF projects to increase from nine percent of GDP in 2022 to 17 percent of GDP by 2026. Official reserves could also increase from less than $9 billion at the end of 2022 to some $30 billion in 2026, by limiting budget deficits and financial flows. Finally, in this optimistic projection, “Lebanon will be able to regain its GDP in USD terms within 4 years,” rising from $23 billion in 2022 to $53 billion in 2026. In 2019, Lebanon's nominal GDP reached nearly $52 billion.

The second scenario presented by the IIF is what could happen if Parliament blocks crucial reforms and the agreement with the IMF subsequently fails, leaving the country without crucial financial aid. In this case, Lebanon's official foreign exchange reserves “will decline to less than $1 billion by 2026.” In other words, BDL will be forced over the next few years to “use most of the obligatory reserve requirement of commercial banks.” As a result, most citizens with bank accounts will no longer be able to access their deposits, while poverty and unemployment will continue to grow, potentially pushing “more than half a million” to leave the country over the next few years.

All this is on top of a public debt that is projected to remain close to 200 percent of GDP in the absence of debt restructuring or a haircut on the foreign currency securities (eurobonds) on which Lebanon defaulted in March 2020. Real GDP, which accounts for inflation, contracted by 45 percent between 2018 and 2021, according to IIF. The real GDP is predicted to contract again in 2023 and beyond, albeit at a slower pace than at the beginning of the crisis, given the weak economy that will maintain its hold in Lebanon.

Finally, in the market, IIF predicts the lira will continue to depreciate, reaching LL 40,000 per dollar by the end of the year. But the IIF does not stop there. If nothing is done, this rate will descend to LL 110,000 per dollar in 2026, a doomsday scenario that foretells the “disintegration” of Lebanon, which could become a failed state like Venezuela, Somalia or, more recently, Sri Lanka.

The very first lines of the report set the tone: authorities in Lebanon “have again placed their own personal interest above the needs of the country.”The Institute of International Finance (IIF), which brings together several hundred major banks around the world, has at times erred towards optimism in its analyses of the Lebanese situation. However, in its latest report published this...