Property seizure of MPs, authorities rule out toxic air, a station memorialized: Everything you need to know to start your Thursday

Here’s what happened yesterday and what to expect today, Thursday, Aug. 11: 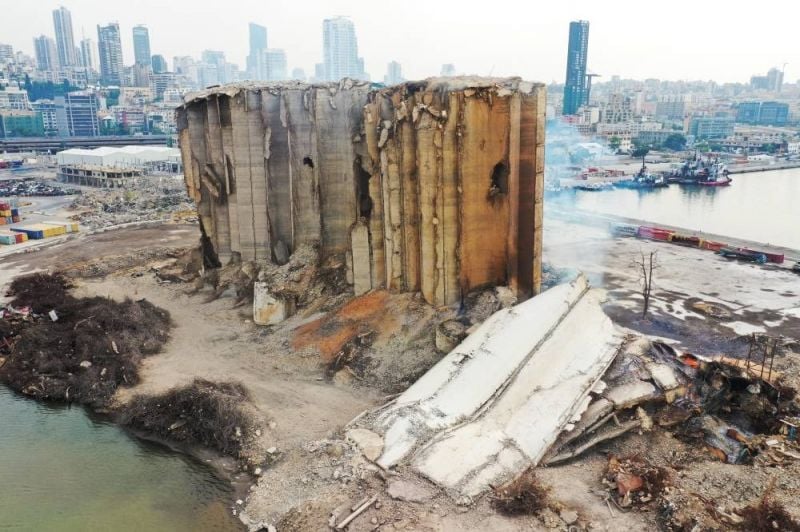 A newly collapsed part of the Beirut grain silos was damaged during the August 2020 blast, in Beirut Lebanon, on August 4, 2022. (Credit: Issam Abdallah/Reuters)

Lebanese authorities ruled out the presence of toxic substances in the air surrounding the Beirut port silos. “The tests carried out last night in several places show, at the precise moment of these tests, that the air is free of any toxic substance,” caretaker Environment Minister Nasser Yassin announced yesterday. Eight silos in the northern section of the Beirut port silos, which were heavily damaged during the Aug. 4, 2020 blast, collapsed recently after repeatedly catching fire throughout July — an event anticipated by authorities, prompting the Ministries of Health and Environment to issue emergency guidelines to mitigate the impact of air pollution.

Judicial authorities yesterday issued a temporary seizure of the property of MPs Ali Hassan Khalil and Ghazi Zeaiter, who are both under investigation in the case of Lebanon’s Aug. 4, 2020 port explosion. The lawsuits were filed by the Beirut Bar Association and the Prosecution Office, which accused the MPs with “abusing of the right of defense of the families of the blast’s victims, prosecution and obstruction of justice,” according to a statement by the families of the Beirut explosion victims. A judicial source told AFP that this decision was at the time a complaint was filed by the Beirut Bar Association, which included questioning the MPs for “using their rights… in an arbitrary manner by filing complaints intended to hinder the investigation.” Compensation of LL100 billion is being sought. Both MPs were re-elected in Lebanon's 2022 parliamentary elections.

The Finance and Budget Committee approved amendments addressing requirements for the World Bank’s $150 million loan to finance wheat imports in Lebanon during a meeting yesterday to discuss preparations for the 2022 draft budget law. According to the chairman of the committee, MP Ibrahim Kanaan, these amendments had already been presented to the general assembly of the Parliament last July by the outgoing Minister of Economy and Trade, Amin Salam. The law was passed, but the amendments were grouped together in another text referred to the Finance and Budget Committee. “Now that these amendments, which modify some of the modalities for the execution of the loan that the WB was requesting, have been validated, the text will be sent back to the Assembly, which will have to approve them," explained Ibrahim Kanaan, without being able to provide a date. "The original law is still in force, but the WB will not agree to disburse the funds without these changes," he added.

Italy and UN-Habitat signed a deal funding plans to turn part of the old Mar Mikhael train station into a park. The 2.3 million euro project, which will include a museum, artist workshop and exhibition space, aims to “allow people in Beirut to rediscover the old train station of Mar Mikhael, and its historical relevance,“ Italian Ambassador to Lebanon Nicoletta Bombardiere said. There are 40 abandoned train stations in Lebanon, and 402 kilometers of track, including the sprawling 19th-century complex in Mar Mikhael complete with rail yards and repair workshops

“Lebanon has gone a long way in negotiations to demarcate the southern maritime borders,” President Michel Aoun said to a delegation of French expatriates. Earlier in the day, Aoun also met with caretaker Social Affairs Minister Hector Hajjar, who called for improved cooperation with UNHCR on all issues related to displaced Syrians. The UNHCR had refuted involvement in repatriation plans after the Lebanese government announced its intent to return 15,000 Syrian refugees to Syria every month. Aoun’s statement regarding the border negotiations came in the wake of a UN warning against potentially inflammatory statements and an address given by Hezbollah head Hassan Nasrallah announcing readiness to retaliate against Israeli attacks and calling on party supporters to be “ready for any eventuality” concerning the maritime border dispute. During the same speech, Nasrallah vowed to not leave “any attack on any human being in Lebanon … unanswered,” in response to the alleged intent by Israelis to assassinate targets in the country. The day before, a Fatah official was killed in Lebanon after an Israeli assault in Gaza killed at least 44 people, including 15 children. The Palestine Liberation Organization’s branch in Lebanon announced that it would hold a “day of anger and general mourning” Friday.

The Parliamentary Budget and Finance Committee and Women and Children’s Committee will meet today to discuss Lebanon’s draft budget and the rights of children from Lebanese mothers and foreign fathers, respectively. The Budget and Finance Committee was given until today to approve amendments to a law concerning a World Bank loan for wheat imports, MP Ibrahim Kanaan said yesterday, adding that the committee is leaning against tax increases and examining public sector salaries. The draft budget is the fulcrum to unlocking an aid package from the International Monetary Fund which has yet to be approved. Meanwhile, the Women and Children’s Committee will examine a draft law that grants children of Lebanese mothers born to foreign fathers civil and social rights. Under Lebanon’s current citizenship law, only men are allowed to pass their citizenship to their children, while Lebanese women are not granted the same right.

In case you missed it, here’s our must-read story from yesterday: “From buster to busted: US authorities charge Lebanese artifact theft informant with criminal possession of stolen antiquities.”

Want to get the Morning Brief by email? Click here to sign up.Lebanese authorities ruled out the presence of toxic substances in the air surrounding the Beirut port silos. “The tests carried out last night in several places show, at the precise moment of these tests, that the air is free of any toxic substance,” caretaker Environment Minister Nasser Yassin announced yesterday. Eight silos in...