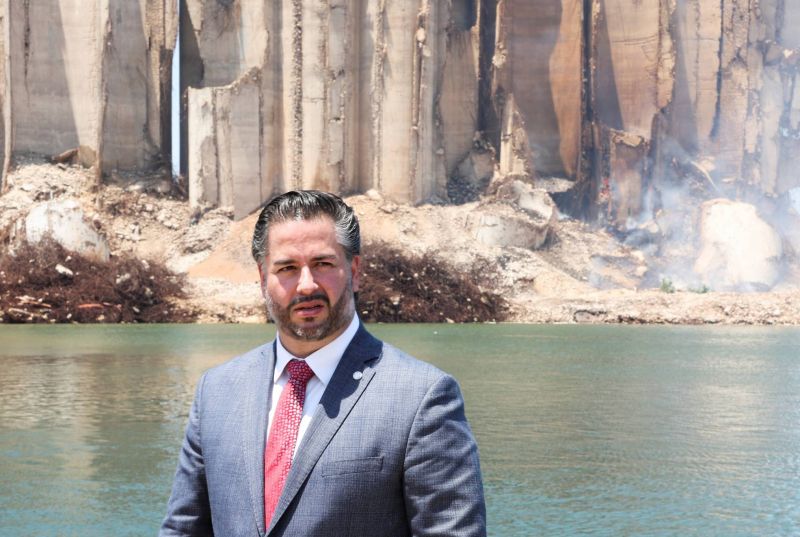 BEIRUT — Caretaker Economy Minister Amin Salam spoke to L’Orient Today on Friday regarding the bread crisis Lebanon has been grappling with for the past weeks, proposed solutions to the country’s wheat supply and storage issues, and the ship carrying allegedly stolen Ukrainian grains that docked in Tripoli.

The European Bank for Reconstruction and Development has conducted a feasibility study regarding building silos in the port of Tripoli, what is the importance of this study?

Salam: This is important because rebuilding the silos in the port of Beirut is going to take a long time, until the port of Beirut is settled from a legal perspective,rehabilitated and cleaned, It might take a few years until we find a solution for the existing destroyed silos and to picking a new location and building [the new silos]. The World Bank is currently putting together a master plan for the entire port of Beirut.

To address the issue of food security and find immediate solutions, we looked at the port of Tripoli, because it is the only port that has a feasibility study and available piece of land. Time is of the essence. Our main food security problem is because we don’t have wheat reserves. If we are to build silos in Tripoli, which based on the EBRD study can happen within a year, we will be solving a major problem, and we’ll have solved the issue of having a shortage of supply, since we don't have silos in Beirut or any other location currently. We are waiting for ships to arrive from abroad and now, due to the Russia-Ukraine war, we have had delays of over a month, ships that [normally] take 10 days to arrive took three to four weeks to arrive. This created a shortage of supplies; this is also part of the problem.

This is not the first plan to expand and modernize the port of Tripoli but the facility has seen few tangible upgrades. What makes this plan any different?

Salam: The first thing I asked when I got appointed as a minister is to build silos in the port of Tripoli. I received the EBRD study in early June of 2022, and I have been pushing and communicating with a lot of donor countries, the World Bank, and a number of Gulf countries that we have a study and we can do it as BOT(Build-Operate-Transfer) or BOO(Build-Own-Operate) we can find a legal and investment structure to build it but it’s important for Lebanon strategically. Most of the feedback we received was positive, and many are looking forward to investing or donating to Lebanon to build those silos.

You have said that two new grain silos will be built, however, this can’t happen before the IMF deal.

Salam: I’m saying this is a food security need, we have a study and there is a need, thus we are doing serious talks with investors and donor countries. We are doing our duty and the work that should be done, so that once the IMF deal is ready, we would be ready to execute. We can't sit and wait for the IMF deal to be completely done to start receiving studies and negotiating with donor countries and investors. We are putting everything on the table so once the environment is ready to accept investors and donor countries, we can begin executing.

What is the cost differential between building grain storage in Beirut, Bekaa, and Tripoli?

Salam: Between Beirut and Tripoli, the cost will be the same because both of them are ports. Both will have the same logistical operations where ships will arrive from Europe or Turkey or anywhere in the world, to tripoli the same way they used to arrive at the port of Beirut. However, for the location of Bekaa, there will be a differentiation in cost because we will have to add the transportation cost. Since the Bekaa location is an in-land location, it's not a sea port, so grains or wheat will be arriving at the port of Beirut or Tripoli, then they will be transported in trucks to the Bekaa valley for storage. So it is up to the government, after executing the project, to subsidize transportation costs, to keep all the wheat and grains at a unified price. There is only one factor that would add cost to the location in Bekaa, which is the transportation cost from either of the ports to transport them. But the government can find a financial subsidy to unify the cost. If we had inland grain silos, maybe in the future we will have inland shipments from Jordan or other countries that could eliminate transportation.

What are the plans for a new grain storage at the port of Beirut? Replacing silos, building new silos in a new location or the partial replacement of silos?

Salam: I am not tying the demolition of silos to building the new planned silos. However, in the port of Beirut you need to allocate a new massive piece of land, which is now our challenge as the Ministry of Economy with the Ministry of Public Works and Transportation to give us this land to build new silos. The demolition has nothing to do with the current silos. However, for the existing silos, my suggestion was to keep a part of these silos as a memorial and to clean up the rest that doesn't need to stay.

A Syrian ship carrying stolen Ukrainian barley and flour docked in Tripoli on Thursday, and the Ukrainian embassy informed the Lebanese authorities. What measures has the Ministry taken in this regard?

Salam: The ones dealing with the issue are the Lebanese customs, because usually these kinds of ships go through customs and then they go through the Ministry of Agriculture. I don’t have yet the details why it came to Tripoli. I informed all the authorities to investigate the ship to get all accurate details, and there has been an investigation since the early hours of the morning, and all security entities are trying to figure out all the accurate details and what needs to be done. We have received multiple reports over the past two months of similar ships but this is the first one that really docks in Lebanon.

As a Minister of Economy, what would you like to tell the Lebanese people who have been suffering greatly from the bread shortages and have been waiting for hours to receive a bundle of bread?

Salam: I want to inform the Lebanese people that we have put a new mechanism for distribution which is a fair and equitable distribution in Lebanon around the mills and bakeries across Lebanon. We are publishing distribution reports on the website of the ministry so that anyone, whether it's a syndicate, citizen, or authority can see how much wheat or flour is being distributed. Therefore, there is no excuse anymore for any bakery to come out and say we haven't received shipments. Furthermore, this week Lebanon has received 49,000 tonnes of wheat which have been delivered into the Lebanese market, paid by the Central Bank, and distributed around all mills in Lebanon. As of today, there is no logical or reasonable explanation for the crisis to continue because wheat is present in the country, and it is enough for 6 weeks or more. And to back this up, we just got approved the $150 million loan by World Bank, which covers our needs for another nine months, so we should be in good shape for another 10 months and have wheat supplies and have bread for all people.

BEIRUT — Caretaker Economy Minister Amin Salam spoke to L’Orient Today on Friday regarding the bread crisis Lebanon has been grappling with for the past weeks, proposed solutions to the country’s wheat supply and storage issues, and the ship carrying allegedly stolen Ukrainian grains that docked in Tripoli.The European Bank for Reconstruction and Development has conducted a feasibility...