BEIRUT — Lebanon’s legislature voted caretaker Prime Minister Najib Mikati in for another term Thursday, by a wide margin over the other main contender, former ambassador the the UN Nawaf Salam. More MPs cast blank votes in protest against the available options than voted for Salam. 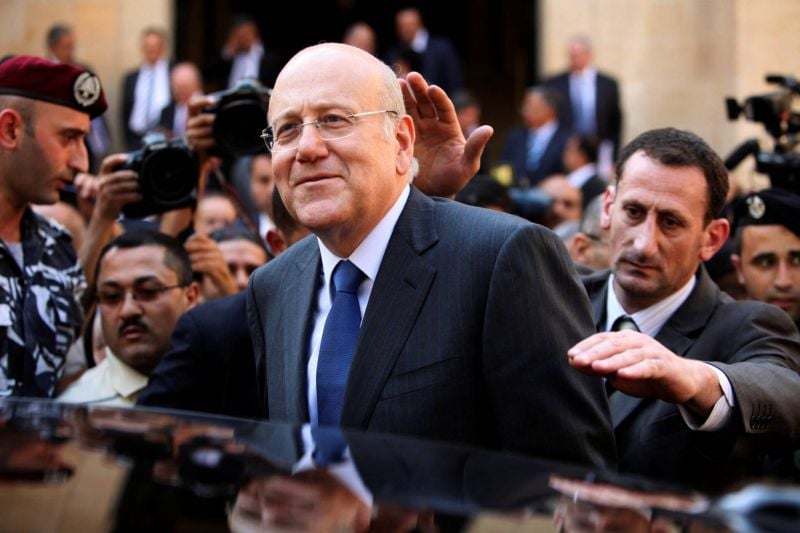 Lebanon's Prime Minister Najib Mikati leaves the Parliament building under the escort of body guards, after winning 68 out of 128 votes in a vote of confidence on the third day of the parliamentary session in Beirut on July 7, 2011. (Credit: Mohamed Azakir/Reuters)

BEIRUT — Lebanon’s legislature voted caretaker Prime Minister Najib Mikati in for another term Thursday, by a wide margin over the other main contender, former ambassador to the UN Nawaf Salam. More MPs cast blank votes in protest against the available options than voted for Salam.

Political blocs and independent MPs cast their votes serially throughout the day, in a series of consultations with President Michel Aoun at Baabda Palace. The president is required by law to select the candidate who receives a plurality of votes, not counting blank votes.

Mikati will now be tasked with forming a government, an often-arduous — and sometimes impossible — task. His predecessor, Saad Hariri, stepped down last year after trying for nine months unsuccessfully to reach an agreement with Aoun on a cabinet lineup. Hariri then announced his complete withdrawal from politics earlier this year, leaving Lebanon’s Sunni community (the prime minister’s post is by convention always designated for a Sunni) politically fragmented.

In the final count, 54 MPs cast votes for Mikati, for whom this will be his fourth term as premier since 2005. This time, the results show a dip in support for the Tripoli billionaire, who garnered 72 votes the last time he was designated, in July of last year.

Some 25 deputies cast votes for Salam, the former ambassador and permanent representative of Lebanon to the United Nations and a judge on the International Court of Justice in the Netherlands, while 46 MPs cast blank votes and MP Ashraf Rifi (independent/Tripoli) boycotted the consultations altogether.

One deputy, Jihad al-Samad (indepedent/Minyeh-Dinnieh) cast a protest vote in favor of former Prime Minister Saad Hariri, and another, Ihab Matar (independent/Tripoli), voted for a person by the name of Rawaa Hallab, a Lebanese University professor of social sciences, saying that he hopes "new competent people will rise to power."

Mikati received the support of the 15 MPs in Hezbollah’s Loyalty to the Resistance bloc and the 17 in Amal’s Development and Liberation bloc, the two major Shiite parties, as well as of a bloc of six MPs formerly associated with Hariri’s Future Movement.

“All opportunities must be seized and obstacles ironed out to form a cabinet,” said Hezbollah MP from Nabatieh Mohammad Raad on behalf of his bloc, calling for “realism” and putting “the national interest” before any other consideration.

Salam, on the other hand, received the votes of 10 out of the 13 opposition MPs associated with the protest movement, while three of them — Halimé El Kaakour, Cynthia Zarazir and Elias Jaradeh — did not vote for anyone.

Explaining the vote of most of the protest MPs for Salam, Firas Hamdan (new opposition/Marjayoun-Hasbaya) characterized it as a vote for change.

"It is unacceptable to continue with the same approaches and faces,” he said.

However others questioned whether Salam represented a real change.

For MP Charbel Massaad (independent/Jezzine), who cast a blank vote, Mikati is part of the political system that has failed in managing the crisis the country is currently facing; however, Massasd said he abstained from voting for Nawaf Salam because he did not present a "program.”

Apart from some of the protest movement and independent MPs, the blocs of the two largest Christian parties — the 19 deputies in the Lebanese Forces’ Strong Republic bloc and the 17 MPs from its primary rival in the Christian community, and 16 members of the Strong Lebanon bloc of Aoun’s Free Patriotic Movement — also cast blank votes. Mohamed Yahya, an MP from Akkar who had been slated to vote with the FPM bloc, in the end voted for Najib Mikati.

Explaining his bloc’s decision not to support a candidate, Lebanese Forces MP Georges Adwan said, “Our group was recently trying to bring opposition forces together around the issue of the country’s sovereignty, in order to have a single position on the appointment of the prime minister. Unfortunately, we failed on this point.”

FPM leader Gebran Bassil said the group had cast a blank vote in part because Mikati had expressed doubts about the prospects of forming a new government and "because of the failure to achieve basic matters, such as those related to Banque du Liban, borders and others.”

With regards to Banque du Liban, Aoun and Mikati have been at odds over the tenure of BDL Governor Riad Salameh, who Aoun wants to oust while Mikati has been resistant to the idea.

As for the question of government formation, it will be crucial, since a caretaker government would be unable to conclude negotiations with the IMF.

Ziyad Baroud, a legal expert and former interior minister noted in a policy brief on the role of caretaker governments published last year that a 1995 court ruling had confirmed that "a resigned government can conduct affairs unrelated to matters of supreme state policy, provided that such decisions do not interfere with the upcoming or succeeding cabinet’s ability to adopt policies that it deems appropriate."

"This would imply that a caretaker cabinet ... cannot take high-level/critical political decisions and engage, for instance, in sensitive negotiations with the IMF, or adopt a detailed economic plan for years to come," he wrote.

In a speech following his designation, Mikati promised to work on implementing the preliminary reforms required by the IMF and urged “Lebanese politicians to put their differences aside, and to work toward a unified country because time is running out to rescue Lebanon from the crisis it’s facing.”

BEIRUT — Lebanon’s legislature voted caretaker Prime Minister Najib Mikati in for another term Thursday, by a wide margin over the other main contender, former ambassador to the UN Nawaf Salam. More MPs cast blank votes in protest against the available options than voted for Salam.Political blocs and independent MPs cast their votes serially throughout the day, in a series of consultations...