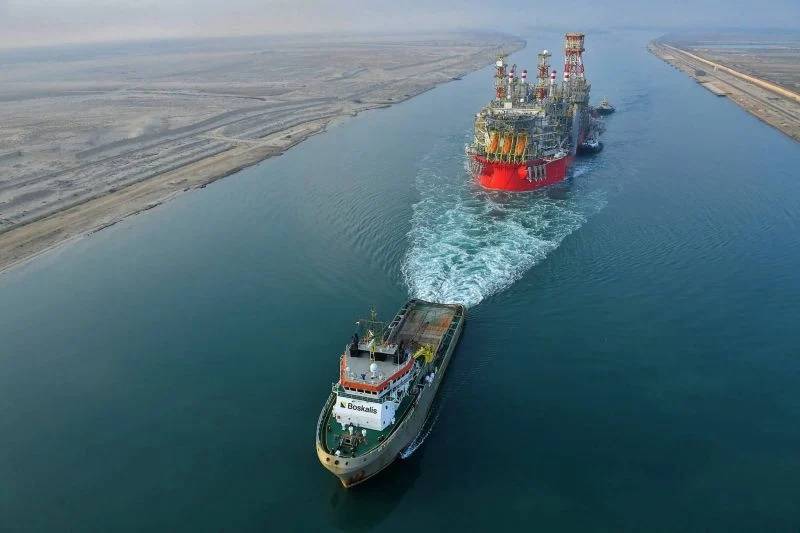 It was not long before Lebanese officials jumped to defend Lebanon’s maritime rights, attacking Israel, and blaming it for escalating the situation. Shortly after, they were quick to contact American mediator Amos Hochstein, requesting him to make an urgent visit to Beirut to tackle the issue claiming that the Lebanese authorities believe in the diplomatic track to resolve the maritime conflict with Israel.

Surprisingly, the Lebanese officials were well aware of Energean Power’s arrival, because the [London-based] company had already announced that the floating rig was undocking from Singapore at the beginning of May.

What’s more, at the end of February, they received a proposal from Hochstein to resolve the maritime conflict based on sharing with Israel the area of 860 square kilometers [that separates Line 1 (border claimed by Israel) to Line 23 (officially claimed by Lebanon)].The Lebanese officials did not lift a finger to respond to the mediator’s proposal or urge him to take further steps.

In reality, this belated reaction is just the latest example of the great confusion that has reigned in the management of this file by the Lebanese authorities since its inception in 2007 (when an agreement — never ratified since — was concluded with Cyprus), and particularly since the adoption of the attempt to resume negotiations in 2020. Notably, last February, President Michel Aoun abandoned Line 29, (which gives Lebanon 1,430 square kilometers in addition to the disputed area), declaring to the media that Lebanon’s maritime border is defined by Line 23, joining Prime Minister Najib Mikati and Parliament Speaker Nabih Berri in this position. Meanwhile, only the Lebanese negotiation delegation and a portion of the public continue to claim Line 29.

Yet, with the arrival of the vessel, the top officials began talking about a disputed area in the waters, referring to the Karish gas field, knowing that it is located outside Line 23.

This grandstanding only suggests that they are in great trouble today and unable to find a way out of the border demarcation quagmire.

In fact, Hochstein proposed that Israel and Lebanon share the so-called Qana field (which is within Lebanon's Block 9 and the 860 km2 area) and Block 8 (also partly within this area). Since Lebanese officials couldn’t consider sharing resources and revenues from the potential gas reservoir with Israel, they tried to convince the public that by sticking to Line 23, Lebanon could obtain a barter like: “Qana in exchange for Karish.”

This equation turned out to be wrong and abandoning Line 29 did not yield the desired effects. The Lebanese officials ended up giving up Line 29 for nothing.

Therefore, they have been trying to pressure the American mediator and Israel by claiming that the Lebanese government continues to consider Karish to be part of the dispute area, but without amending Decree 6433, whereby Lebanon could officially claim Line 29.

Amid the conflicting positions and play on words, it was only normal for the so-called newly elected “MPs for change” to agree on a stance in relation to the country’s resources and sovereignty.

Last Monday, they held a press conference demanding the government to convene even in its capacity as a caretaker cabinet given the urgency of the situation to amend Decree 6433 and take the necessary measures to ask Energean to halt activities in Karish until the completion of negotiations.

The MPs also announced that should the government fail to do so, they would propose a law that would embody the provisions of the amendment and will go as far as to establish a parliamentary committee to investigate the maritime border demarcation issue from 2007 to the present day.

Immediately after the conference, the MPs faced a barrage of criticism, with some considering that amending Decree 6433 a waste of time, and that Lebanon should accept Hochstein’s proposal and focus on developing the oil and gas sector instead.

I believe the MPs’ move was a good step that should be built on. Although it has assumed caretaker status, the government and concerned ministers must be held accountable for not taking the necessary actions when the cabinet was fully effective.

Inaction is costing Lebanon dearly, so is wrongdoing. Therefore, MPs ought to start establishing a parliamentary committee as soon as possible because the Lebanese have the right to know who made mistakes after mistake, who brought us to what we are today.

As for the “pragmatic” calls that we should just accept Line 23 and focus on extracting oil and gas, I say that the protest movement MPs made it to Parliament to establish a new practice in political life and to implement the claims that the Oct. 17 protesters have made about the strengthening of institutions and their emancipation from permanent political bargaining and corruption.

Why would one return to the establishment of corrupt practices especially when it comes to such a vital issue like the demarcation of our borders and natural resources?

Why would one oppose abiding by international laws and treaties concluded by Lebanon? What would one not want to be based on the law and technical methodology and rather accept wrong practices and lines?

Why give up one’s right and accept the reality?

In this case, we might as well accept all the deals that the state will make in the coming months and years under the pretext of the crumbling economy and that we have to act quickly.

Also, those who are calling for speeding up the development of the oil and gas sector, without having adopted first the necessary structural reforms to develop governance, are exposing this potential wealth to the risk of being plundered.

Oil and gas will not save Lebanon’s economy nor will save depositors.

We still need a great deal of political work, reforms, and development at the administration and different sectors’ level, before we can hope to benefit from gas revenues, and we might never benefit from them.

Moreover, I do not understand those who argue that claiming Line 29 would risk a war with Israel or give Hezbollah a pretext to start a war.

As long as the Lebanese government sticks to negotiating the maritime borders, according to pertinent laws and regulations, Hezbollah cannot resort to violence to resolve the conflict. Especially since the party has repeatedly stated that it stands behind the state — even though it has entrusted former MP Nawaf Moussaoui to follow up on the matter and continues to threaten to intervene in the case that the Lebanese authorities would denounce a violation by Israel.

In addition, the caretaker minister of public works affiliated with Hezbollah, Ali Hamieh, did not raise the issue in cabinet.

The party will not jeopardize its standing today by waging a war on Israel. It is well aware that any aggression against Israel could inflict great military and political losses, and turn the public opinion against it. So why would it take this risk when it did not do so for the farms of Shebaa or the officially disputed 860 km2 area?

Why is it any different today? Why are these claims taking precedence over pressure on the government to rectify its course and amend Decree 6433?

Laury HAYTAYAN is an expert in governance in the oil and gas sector and the general coordinator of the Taqaddom party.

Translated from Arabic by Sahar Ghoussoub.

On June 5, Energean’s floating gas production rig, Energean Power, docked in the disputed Karish gas field and is expected to start producing gas in approximately four months.It was not long before Lebanese officials jumped to defend Lebanon’s maritime rights, attacking Israel, and blaming it for escalating the situation. Shortly after, they were quick to contact American mediator Amos...