What will the Sunni voters do on election day? 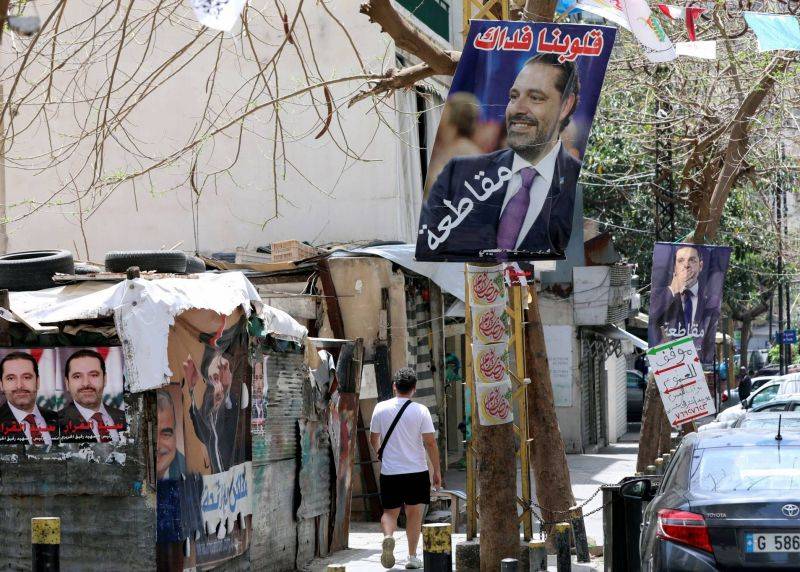 A poster of Saad Hariri reading "boycott" on a street in Beirut, just days before the May 15 legislative elections. (Credit: Mohammad Azakir/Reuters)

This is probably the first time in decades that the Sunni vote, particularly the pro-Hariri vote, has been so unclear three days before the Parliamentary elections on Sunday.

Future Movement Leader Saad Hariri called on his party members in January not to take part in the elections unless they resign beforehand from the party, implicitly inciting them to abstain. This has left indelible marks on his supporters.

Some leading officials of the blue party decided to defy this order by running on various lists while others abstained, leaving the Sunni voters totally confused. Should we vote or not? If so, for which lists, amid numerous choices in the face of the crumbling Hariris foundations and scattered protest movement?

The Sunni vote will be all the more decisive this time as it is related to two major challenges. First, is that it will block the expansion of Hezbollah and its camp, which is anticipated in case of a large Sunni abstention.

Second,, the Sunni voters’ attitudes will be also decisive in selecting the future prime minister, and above all, in the level of legitimacy he will be able to claim after the elections.

A timid Sunni sovereignist vote can only weaken the future prime minister, as was the case with former Prime Minister Hassan Diab in December 2019, who is close to the March 8 camp and who was widely criticized for a lack of stature within his community compared to Hariri’s great popularity.

In this crucial context, and in the face of the indecision by a major part of the Sunni voters, Grand Mufti Sheikh Derian has recently joined the efforts to limit “the damage” and counter Hariri’s watchword.

While the grand mufti urged on Tuesday all Sunni dignitaries to exhort in Friday sermons the Sunni voters to go to the polls massively, Saudi ambassador to Beirut Walid Bukhari, for his part, has campaigned on the ground in a bid to reverse the trend.

For more than two weeks, the diplomat has been crisscrossing the regions and leading a campaign against an abstention that risks, according to the anti-Hezbollah camp, to put the country permanently into the hands of the pro-Iranian camp.

Unconfirmed press reports mentioned that a visit was made to Michel Daher and Myriam Skaff, both candidates in Zahle, to convince them to withdraw the Sunni candidates (Omar Halablab and Mohamed Hamoud) from their respective lists, to the advantage of Bilal Houshaymi, a candidate on the list supported by the Lebanese Forces, Riyadh’s main ally.

In the Hariri strongholds, such as the Beirut neighborhood of Tariq al-Jadideh, signs expressing absolute loyalty to the blue party serve as a challenge to all those seeking to persuade them to vote.

One can read slogans addressed to Saad Hariri that read: “We will abstain, just for your beautiful eyes,” or, “We can certainly vote, but we will not.”

To rub it in, the Future Movement issued on Wednesday, for the third time in a few months, a statement recalling the party’s guidelines and banning supporters from campaigning for any candidate.

This fresh move, which is likely intended to counter the efforts of former Prime Minister Fouad Siniora, who is supporting lists in several constituencies, and those of the grand mufti and the Saudi diplomat, has disappointed many candidates close to the Hariri line who had hoped that Hariri could give, at the last minute, even a faintest sign encouraging participation.

In a speech meant to have historical impact, Siniora on Wednesday urged Sunni voters to vote on Sunday for the sovereignist lists, calling on “all Lebanese to contribute to change and the building of a strong state.”

This searing speech, in which Siniora did not mention Hariri’s name once, is undoubtedly a last-ditch attempt to reduce as much as possible what he considers to be the “harmful effect” caused by Hariri’s attitude.

According to some observers, neither Bukhari’s campaigns inciting the Sunnis to vote, nor the grand mufti’s or Siniora’s calls could dissuade the abstentionists, although their ability to influence them is not to be ruled out.

“If the Sunnis are going to vote, it would be thanks to the Sunni associations and families, to a lesser extent than the directives of Abdel-Latif Derian who has little influence on them, or Walid Bukhari, who is able to convince barely 20 percent of Sunni voters who are still considered close to Riyadh,” said a Sunni influential figure on condition of anonymity.

According to a Tripolitan analyst, it is above all the anti-Hezbollah slogan and fierce campaign in this regard on social networks that would have finally dissuaded the Sunnis from abstaining. “Many voters were convinced by the idea that we must not make way for pro-Hezbollah Sunni candidates,” said the analyst.

While some Sunnis probably changed their minds and decided to exercise their right to vote, the question is who they will vote for. This is a problem that risks scattering their ballots in the face of partisan discipline in the Hezbollah-Amal ranks.

Apart from Akkar, where the pro-hariri sovereignist list, led by Walid Baarini, is unified, the candidates coming from the Future movement are scattered on multicolored lists in the other constituencies.

Nawaf Kabbara, a professor of political science and lecturer at Balamand University, estimated that the Sunni sovereignist votes will likely be divided into three categories: one third of the voters, mainly hard-line Haririans, is expected to abstain. The other two thirds who will cast their ballots will divide their votes between the protest movement’s lists and the lists backed by Siniora, Ashraf Rifi, Mustapha Alloush or other figures who also withdrew from the blue party.

“We must not forget about those Sunnis who would have wished to vote for change and who will abstain because they were disappointed by the available lists and by the crumbling protest movement,” Kabbara said.

One must keep in mind that in many peripheral localities, the challenge remains family and clan-based. This dimension takes precedence over partisan politics and will be decisive. This is the case, for example in Akkar, of Walid Baarini, incumbent MP in Hariri’s bloc and a notable of the region who relies on the members of his clan.

This is probably the first time in decades that the Sunni vote, particularly the pro-Hariri vote, has been so unclear three days before the Parliamentary elections on Sunday.Future Movement Leader Saad Hariri called on his party members in January not to take part in the elections unless they resign beforehand from the party, implicitly inciting them to abstain. This has left indelible marks on...