These are the main issues at stake in the May 15 elections: the result of the inter-Christian battle, the Sunni turnout, the chances of the thawra (revolution) groups, the Shiite representation and the parliamentary majority 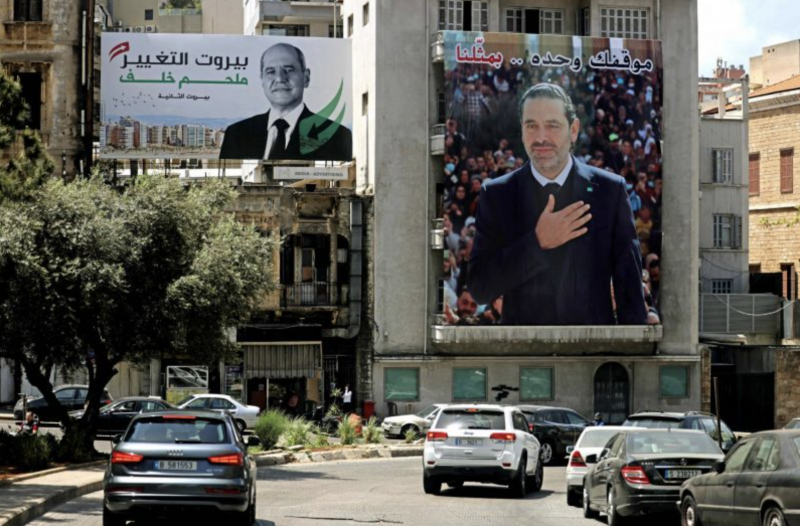 A poster of Melhem Khalaf (left), a candidate close to the Oct. 17 uprising, next to a photo of Future Movement leader Saad Hariri. (Credit: Joseph Eid/AFP)

Only two days separate us from the parliamentary elections in Lebanon. Once the ballots are counted and results announced, answers to many uncertainties surrounding this election — and the future of Lebanon — will finally be revealed.

L’Orient-Le Jour takes a look at these questions that only the ballot box can answer.

By announcing that he and his political party would not take part in the elections, former Prime Minister Saad Hariri has contributed considerably to the uncertainty surrounding the elections.

Upon withdrawing from the arena, the Future Movement, the main Sunni party in the country, risks demobilizing the electorate of this community, which represents some 30 percent of registered voters, according to figures from the Interior Ministry.

Indeed, the turnout in Saudi Arabia (where Sunnis represent 56 per cent of the 13,105 Lebanese registered to vote) seems to have set the tone.

According to the Interior Ministry, only 49 percent of the registered voters in the kingdom turned out, an 8-point drop from the 2018 turnout. However, the Foreign Ministry’s numbers differ, accounting for a 50.1 percent turnout.

According to observers, abstention in Saudi Arabia was above average in the predominantly Sunni constituencies of Beirut II, North I and II (Akkar, and Tripoli-Minieh-Dinnieh), and South I (Saida-Jezzine).

These figures are all the more surprising knowing that Riyadh has been active in mobilizing Sunni voters and supporting, to this end, the action of former Prime Minister Fouad Siniora.

Siniora is leading efforts with other Sunni figures, some of whom are affiliated with Hariri, to fill the vacuum left by the Future Movement’s head and prevent it from playing into Hezbollah’s hands.

Siniora and his allies (Samir Geagea’s Lebanese Forces and Walid Jumblatt’s Progressive Socialist Party) are counting on a mobilization of the Hariri electorate to make a breakthrough.

According to concordant sources, Riyadh has been pressuring Hariri to break his silence and ask his supporters to participate in the elections on Sunday.

The leader of the Future Movement refused outright the kingdom’s demands.

Meanwhile, Dar al-Fatwa, the highest Sunni religious authority in Lebanon, has a different say in this regard.

Grand Mufti Abdel-Latif Derian is said to have asked sheikhs to encourage people to go to the polls during Friday sermons. .

Figures from the United Arab Emirates, where according to the Foreign Ministry, turnout exceeded 75 percent in Abu Dhabi, and 71 percent in Dubai, with large crowds in the polls for the Beirut II and the Chouf constituencies, suggest that the Sunni electorate has not been completely demobilized.

The Sunni vote would benefit the lists claiming to represent the Oct. 17, 2019, popular uprising, according to the forecasts of the various electoral machines.

The chances of the protest movement groups

Will the crowded squares of the Oct.17 uprising translate into seats in parliament?

This is one of the main unknown outcomes of this election, after the 2019 uprising when a large majority of Lebanese rose up against an abhorred ruling class, and after a major explosion destroyed the port of Beirut and large parts of the capital, killing over 220 people.

While most experts L’Orient-Le Jour spoke with do not expect the groups and figures that emerged from the uprising to win a majority of parliamentary seats, they could still win a number of seats that would allow them to exert influence on key issues, such as the appointment of the prime minister or constitutional revisions, especially if they manage to forge ad hoc alliances with other political blocs.

However, while the thirst for change is there, building an influential political bloc representing this trend will not be an easy feat.

First, due to the electoral law that imposes electoral thresholds that are sometimes too high, as in Saida-Jezzine (20 percent) or in Bekaa II (16.7 percent).

But also because the protest movement groups have not managed to agree on a project and to run in unified lists. Forging alliances with more traditional opposition figures, such as the Kataeb, Michel Moawad, Fouad Makhzoumi and Oussama Saad, has also divided the ranks of the thawra groups.

This does not mean they don't have any chance in some constituencies, mainly in Beirut, Mount Lebanon and even in South III, where a unified reformist opposition list is facing off against the list of Hezbollah and the Amal Movement.

However, their electoral speeches over the past two days have been mainly aimed at mobilizing their electorate against the risk of a breakthrough on part of the protest groups.

In 2018, in Bekaa III, the LF and the Future Movement list won two of the 10 seats to be filled: Antoine Habchi for the Maronite seat and Bakr al-Houjeiri for the Sunni one.

Four years later, it is not certain that the LF will be able to repeat this scenario without Hariri’s support, especially since many Shiite candidates walked away from Geagea’s party, after accusations of having caved in to pressure from Hezbollah.

As for the protest movement groups, they are heading to the polls on divided lists, which weakens their chances of making a strong breakthrough.

In the South II constituency, three lists are facing off against Hezbollah and Amal: The first is supported by the LF, the second by the opposition groups, and a third by independents opposed to the Amal movement but in favor of the “resistance’s” weapons.

Defeating Berri’s list, who has had the upper hand in this area for some 30 years, will not be an easy feat.

Finally, in South III, a broad coalition of protest forces is facing the Amal-Hezbollah alliance in their stronghold. In this constituency, where 11 seats are up for grabs, the thawra groups can count on a relatively low electoral threshold (9.1 percent).

If they manage to cross this threshold, they will be able to claim the Greek Orthodox seat, and a Shiite seat, inflicting a strong symbolic defeat on the two political parties who claim to represent the Lebanese Shiite community.

The stakes are high for the pro-Hezbollah camp, which does not want to lose its majority in the elected Parliament, or the 27 Shiite seats it currently has.

Indeed, the main group that constitutes this majority, Gebran Bassil’s FPM, is losing popularity and risks seeing its parliamentary bloc shrink significantly, thus depriving Hezbollah and its allies of this major asset.

If this happens, the majority could pass into the hands of traditional groups opposed to the Party of God, mainly the LF, the PSP and Sunni figures close to Siniora. But with Hariri out of the picture and a potential Sunni boycott of the election, this scenario appears to be far-fetched.

The most likely scenario is that May 15 elections will result in a parliament without a clear majority, with the reformist camp and gray political groups, such as Prime Minister Najib Mikati’s bloc, the Al-Jamaa al-Islamiya,or Islamic Group (if it can get MPs elected) as well as independent figures playing a significant role.

Undoubtedly, the parliamentary majority does not play a central role in a country where political groups within the same camp may have many disagreements on certain issues.

It is “a majority à la carte.”

The concept of a majority is all the more flouted since the 2008 Doha Agreement, which no longer guarantees that one side can govern the country alone.

The agreement reached in May 2008 in the Qatari capital put an end to an unprecedented political and institutional crisis, establishing a return to dialogue and consensus as a substitute for the logic of confrontation.

The fact remains that a parliamentary majority gives the political camp that holds it an advantage on key issues, such as the appointment of a prime minister and the election of the president.

The first round of the presidential election will be played out in the ballot box on May 15.

The battle between the FPM and the LF for the Christian leadership will be a difficult one. The FPM claims that the media exaggerates its loss of popularity and counts on its electoral alliances with Hezbollah and Amal to maintain its position of strength.

Meanwhile, the LF is promising a tidal wave of support in the elections, counting on a sanction vote against the FPM and thus a useful vote in its favor.

The results of this battle will surely have consequences for the process of appointing President Michel Aoun’s successor to the presidency.

Undoubtedly, this does not mean that the list of candidates for the post is limited to Samir Geagea and Gebran Bassil. On the contrary, these two figures have very little chance of reaching the Baabda Palace after October 31, the day presidents are elected.

Even Aoun and Mikati have admitted that the election of the next president will be an uphill battle and will require a compromise between the various parties.

However, the largest Christian parliamentary bloc will certainly have its say. If the protest movement groups can make a breakthrough in the elections, they could also potentially influence the choice of the future head of state.

Only two days separate us from the parliamentary elections in Lebanon. Once the ballots are counted and results announced, answers to many uncertainties surrounding this election — and the future of Lebanon — will finally be revealed.L’Orient-Le Jour takes a look at these questions that only the ballot box can answer.The Sunni turnoutBy announcing that he and his political party would not...