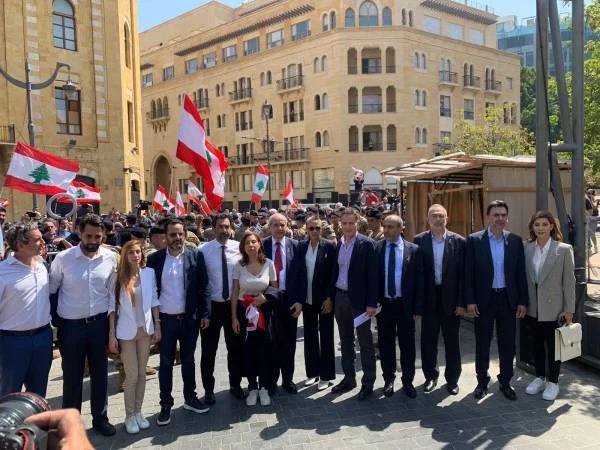 Waddah Sadek, fifth from the left, arrives at Nijmeh Square on 31 May, 2022, one of 13 MPs associated with the protest movement. (Credit: Mohammad Yassine/L'Orient Today)

Having cast a blank ballot in the election of Parliament speaker the day before, newly elected MP Waddah Sadek was between meetings when he spoke with L'Orient Today at his cigar smoke-soaked Gemmayze office.

He was also between controversies, having just revealed his support for the so-called sovereign wealth fund, and still reeling from the reaction to comments he made on civil marriage and LGBTQ+ rights during his campaign. Though one of the 13 opposition group MPs elected last month, Sadek’s positions do not always align with what many progessive voices had hoped for in an opposition figure.

This is not Sadek’s first foray into politics — he’d previously worked under former Prime Minister Rafik Hariri, as a communications strategist. After he moved from Al-Jadeed to Future Television in 1993, as head of the sports division, Hariri asked him to help prepare for the 1997 Pan-Arab Games. In terms of infrastructure “we weren’t ready yet,” he recalled, as Lebanon was still emerging from the Civil War, but he found a way to make up for it.

As part of the organizing committee, he looked at what other Arab countries were doing when it came to broadcasting mega-sporting events. He discovered that no one had done 24-hour coverage before.

“This was before Bein Sports and Abu Dhabi Sports,” he recalled, adding that he came up with the idea of retooling Future Television for 24-hour sports broadcast for the duration of the games. From there, he said, other TV channels started mimicking what he did.

“When they saw a TV channel turn into a 24-hour-a-day sports channel, that’s where I think they got that idea,” Saddek said. His work also extended to the AFC Asian Cup that Lebanon also hosted in 2000.

In the early 2000s, Saddek moved from television to public relations. He retained his relationship with Hariri, organizing political campaigns for the 2003 municipal elections and the 2005 parliamentary elections after Hariri’s assassination, as well as overseeing work for the 2009 elections under Saad Hariri.

Speaking to L’Orient Today, former MP Moustafa Allouch claimed that Sadek was not part of the Future movement or involved politically.

In 2009, he parted ways with the movement, as he did not like the compromises it made with Hezbollah and felt that it was missing a mission. In a sense, he shares a similar background with MP Paula Yacoubian: he has emerged from within the ranks of the Future Movement, Future Television to be exact, and has now entered politics on his own.

Sadek is one of the few MPs to have lived through the Civil War and not have been part of any political family.

He recalls being six years old when the war broke out in 1975. Suddenly, he had to switch schools, because he could no longer access Furn al-Shubbak as Beirut was divided into two.

“I changed so many schools,” he said.

His family had to sleep in a bomb shelter many a night. “We were living in terror,” he recalled. “The sounds of mortars outside were heart-wrenching.”

Sadek lost a brother, who died as he was about to graduate, and his family had to leave the country three times as they lived near the front lines. “Our house was destroyed twice,” he recalled.”The entire area was filled with terror.”.

He noted that the horrors of the war created a sense of community with their neighbors, who were living in the same circumstances. “You lived in terror,” he explained. ”You lived adventure and you lived with a big family.”

This experience gave him perspective on life, he said, and taught him to be tolerant of others and made him more open to ideas like civil marriage.

That conviction was thrown into question in the lead up to the 2022 parliamentary elections.

Controversial positions emerged when a reporter incisively asked him if he would support civil marriage and “legalize homosexuality.”

In response, he said that he would make civil marriage optional to give people the choice, but strongly affirmed that LGBTQ people had rights politically as they can run for Parliament and gain employment in government. That is among the human rights that they ask for.

“But this does not mean that we demand gay marriage or expressions of homosexuality,” he said, “and I on a personal level am against it to the max and will fight against it in Parliament with all my strength.”

Saddek told L’Orient Today he believes that mandatory civil marriage is “not for a country that’s been living on sectarianism for 50 years.”

“What I am saying is give people the choice,” he said. “Religious figures can't deny us this. By the same token we cannot abolish religious marriage.”

Saddek was himself married in a civil service in Cyprus.

As for LGBTQ+ rights, Sadek says that he is for them in the same way he is in favor of humans rights, and women's rights, but opposes gay marriage and sticks by what he said in the controversial interview.

“Gay marriage is not doable in Lebanon,” he said, “not when three-quarters of the population are against civil marriage.”

While he would vote against such a bill if it came to vote in Parliament, he pointed out his opposition to the infamous Penal Code 534, prohibiting sexual intercourse seen to contradict “the laws of nature,” which has often justified the arrest of LGBTQ+ people.

Despite this, supporters say that he is open to differing viewpoints. One such supporter, Hadi Mounla, believes that Saddek has made a leap in his thinking since the 1990s, though he disagrees with “his economic propositions, that tend toward economic liberalism ... We also differ with [his] view of some of the opposition figures and parties, such as Neamat Frem and Michel Moawad and the Phalange.”

That said, Mounla was able to find common ground to work with Saddek, adding that he is “ready to abandon any idea that he considers correct if new data is presented to him.”

Another source of controversy is Saddek’s support of the so-called sovereign wealth fund, which he insists is different from that of Lebanon’s commercial banks. He is against the sale of state assets, he says, and would rather they be entrusted to the private sector managers of the proposed sovereign wealth fund for 10 years, in order to generate money for the state.

“The government is corrupt, so you get the private sector to run [state-owned utilities], and you put conditions on it.”

Hussein Cheaito, a development economist at the Beirut-based think tank The Policy Initiative, says that while the “aim of such a fund is to bolster the social welfare of future generations” in Lebanon, the “story can’t be any more different here.” Cheaito says that if a fund is created to collateralize state assets, then these “state assets will be claimed by creditors.”In any case, Cheaito argues, private sector management of the fund is not feasible because of Lebanon’s corrupt procurement practices.

Sadek says he is against ABL’s plan to distribute losses to taxpayers and that the banks should repay their depositors. He is also against depositors losing money, unless those who earned huge sums of interest on their deposits repay the principal. Saddek says he himself lost money in his checking account.

The MP hopes to get several things done in Parliament. First among them is fixing the potholes in Beirut’s streets and addressing the electricity issue. He said that days before assuming office he had a lengthy meeting with both the mayor and governor of Beirut to bridge gaps and find funding to fix these issues. Within the coalition of 13 opposition MPs, he says, he is working on several draft laws designed to reform internal laws of Parliament, ensure the independence of the judiciary and aid the manufacturing sector.

Having cast a blank ballot in the election of Parliament speaker the day before, newly elected MP Waddah Sadek was between meetings when he spoke with L'Orient Today at his cigar smoke-soaked Gemmayze office. He was also between controversies, having just revealed his support for the so-called sovereign wealth fund, and still reeling from the reaction to comments he made on civil marriage and...