How to reform the state while answering the Hezbollah question? 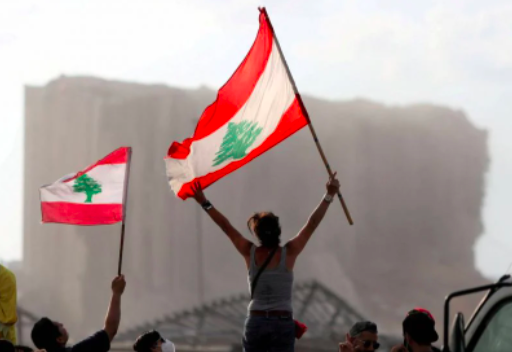 Demonstrators waving the Lebanese flag during a sit-in on Aug. 11, 2020, near the Port of Beirut, blown up a few days earlier by an explosion which destroyed entire districts of the capital. (Credit: Goran Tomasevic/Reuters)

During a discussion between journalists and diplomats in the halls of a European embassy in Beirut, one diplomat asked, “How can we save Lebanon? Help me find the key,” a question that many of us ask ourselves many times every day.

Is there really a key? What does it look like? Is it realistic to keep thinking that we can save this country? But save it from what and from whom? From an unknown fate or from itself?

In order to solve a problem, one must first understand its causes.

What is the Lebanese crisis all about? Here comes the first challenge: Everyone has their own story, their own storytelling even, and none of them is fundamentally wrong.

Ask 10 people to summarize the Lebanese crisis in one sentence, and you get as many different answers.

It is the consequence of “Hezbollah’s stranglehold on the state,” “the politics put in place by Rafik Hariri,” “the large-scale corruption and clientelism practiced by the ruling oligarchy,” “foreign interference,” “the collapse of a banking system based on a Ponzi scheme,” and so on.

The Lebanese crisis is multidimensional, which is what makes it so complex.

It is identity-based, political, economic, financial, geopolitical, ecological and even moral. But when did the ship start to leak? It’s difficult to answer.

Was it during the financial engineering of 2016, put in place by Banque du Liban Governor Riad Salameh with the assistance of the main commercial banks?

That same year, Michel Aoun was elected president after two-and-a-half years of blackmail by Hezbollah and its main Christian ally. Was this the reason that things started to go sideways?

Or was it in 2008, when Hezbollah and its allies imposed the Doha Agreement that made governance impossible, after having invaded several areas of Beirut?

Did it all start in 2005, when Rafik Hariri was assassinated, and the culprits remained at large?

Was it in 1992, in the aftermath of the 1975-90 Civil War, when the former prime minister decided to peg the Lebanese lira to the dollar and to bet everything on the banking sector?

We could go on like this all the way back to the creation of Greater Lebanon in 1920.

A century later, we are still not a nation — although the Oct. 17, 2019, uprising invoked a very similar image of what a nation could be — with the few foundations that made Lebanon a state having been completely blown up.

Everything has to be rebuilt. But where to start?

No one, neither among the traditional parties nor among the newcomers, has the solution.

Some of them no longer even pretend to try, and sometimes they seem to have a vested interest in keeping things as they are.

Others, those who still have hope of making Lebanon a state worthy of the name, have to face a mountain of obstacles that are often intertwined.

How to build a state with a militia of “100,000 fighters,” (in reference to Hezbollah leader Hassan Nasrallah’s words), organically linked to a foreign country, and which, after having been a state within the state, has now become a state above the state?

How can economic and political systems be reformed when governments take months to form and are then paralyzed by the disagreements that arise on a daily basis between their members?

How can we do so when the institutions are vampirized by former warlords who have been converted into all-powerful zaims (sectarian leaders) within their communities and whose power is essentially based on assabyia (esprit de corps or a sense of gregariousness) and on large-scale clientelism financed by the plundering of the state’s resources and their redistribution by sharing the cake?

How can we reinvent Lebanon when we are not even capable of reinventing ourselves, when, under the pretext of interests, friendships, family allegiances, deep anxieties, fear of the unknown, we show apathy, we give up defending our principles, we find comforting advantages in this “system” that only yesterday we were denouncing, we take refuge in our (small) social, political or community bubbles?

That’s a lot for one country, all the more so in a regional context that makes Lebanon, because of our own divisions, a theater and not an actor in the war of axes.

To solve a Rubik’s cube, you have to start by solving one of its faces.

Which one to choose first in the Lebanese case?

Those who claim to be sovereigntists claim that Hezbollah’s weapons must be addressed first. But none of them presents a detailed and realistic strategy to achieve this goal.

Can it be done without risking attacks, institutional blockades that paralyze the state, attempts to terrorize the population, and even a civil war? Should we do it, despite this, and for how long is this strategy tenable?

The others, whether revolutionaries or conservatives, argue that the first thing to do is to reform the state, provide essential services to the population, restructure the banking system and reach an agreement with the International Monetary Fund, which is a prerequisite for economic recovery.

But, in order to reform the state, one must still have power. The Lebanese problem is not technical, it is political.

The zaims are still in power and most of them have no interest in implementing these reforms, which would mean cutting off the rotting branch on which they have been perched for decades.

But here too, there is the issue of weapons.

Since 2019, Hezbollah has proven to all those who might still have doubts that it is ready to do anything to safeguard the status quo of which it is the main beneficiary.

This is the dilemma we are looking at: reforms are urgent, and the battle against Hezbollah requires time.

The last few years have proven that it is impossible to reform the state without enshrining sovereignty.

But can sovereignty be regained without first reforming the state? How can we oppose Hezbollah without offering all those who support it a credible alternative, which can only be the state?

And how can we make progress on either of these two issues as long as the country remains ungovernable?

The path is so winding that it seems invisible to the naked eye for the moment.

The May 15 legislative elections are not a cure-all, but they remain an indispensable first step in mapping out the path.

We must be clear: The elections alone will not cure the cancers that threaten the very survival of the Lebanese body, and part of the answer depends on regional and international considerations.

Even if the opposition forces claiming to represent the Oct. 17, 2019 uprising were to achieve an outstanding score, their room for maneuver would remain limited.

Hezbollah will not allow anyone other than Nabih Berri to be elected as head of Parliament. Nor will it allow a government to be formed without it, making sure to have the capacity to block it at least, if not to control it.

Finally, Hezbollah will not allow someone who is openly hostile to it to ascend to the presidency.

Meanwhile, the zaims and their entire ecosystem would seek to defend their own turf, safeguard their interests and those of their clientele.

What is the point then, one might legitimately ask?

What is the point of exhausting oneself to confront this insatiable and imperishable Hydra?

The legislative elections must first serve as an internal and external message, to say that Hezbollah does not dominate Lebanon, that the legitimacy of the traditional leaders is being questioned by at least part of their respective popular bases.

These two dimensions are complementary and allow us to lay new foundations for the future.

First, the opposition movement groups can try to weigh in Parliament by creating a real opposition, and if circumstantial alliances allow it, to try to even take over.

But this remains insufficient. They must, and they have not really done so since 2019, explain how they are going to fight the battle of sovereignty and the battle of reforms and at the same time put forth an institutional solution to the governance crisis.

One of these battles may of course move faster than the other, but both issues must be on the table from the start.

It will take at least a decade to “save” Lebanon, and there is no guarantee that those who wish to do so will succeed.

What is certain, however, is that by doing nothing, by considering that the vote will have no impact anyway, the country will inevitably continue its descent into hell.

And nothing and nobody will help a Lebanon that refuses to help itself.

During a discussion between journalists and diplomats in the halls of a European embassy in Beirut, one diplomat asked, “How can we save Lebanon? Help me find the key,” a question that many of us ask ourselves many times every day.Is there really a key? What does it look like? Is it realistic to keep thinking that we can save this country? But save it from what and from whom? From an unknown...