In Lebanon, the presidential race is on

The chances of both Hezbollah's allies, Gebran Bassil and Sleiman Frangieh, to ascend to the presidency appear to be slim for various reasons 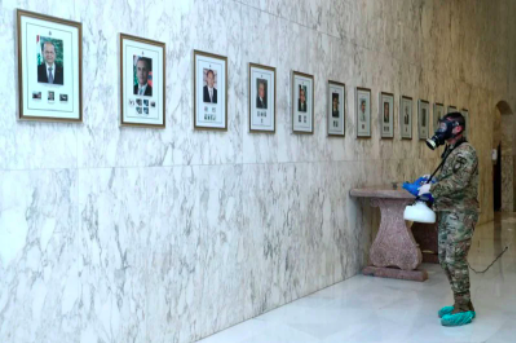 A disinfection operation at the Baabda Presidential Palace during the COVID-19 pandemic. (Credit: Dalati and Nohra)

“Neither Bassil nor Frangieh.” This is what Progressive Socialist Party leader Walid Joumblatt said about the Lebanese presidential election last week, announcing that he would not vote for either of these two contenders for the top job.

While President Michel Aoun's mandate officially ends in October, the presidential race has accelerated a few weeks ahead of the parliamentary elections, especially after an April 9 iftar during which Hezbollah Secretary General Hassan Nasrallah gathered around him Free Patriotic Movement leader Gebran Bassil and the head of the Marada Movement, Sleiman Frangieh.

Traditionally, the presidential election in the land of the cedars has depended on two factors: the balance of power at home, particularly among Christians, which will be determined by the legislative elections, and regional and international balances.

In this context, Bassil, the president’s son-in-law, appears to be in a very delicate position: He cannot count on any ally, except Hezbollah, at home, after being sanctioned by the United States in November 2020.

Meanwhile, Frangieh appears to have a head start. Yet his weak political weight and his proximity to Damascus do not work in his favor.

Visiting Egypt last March, the prelate said that it was necessary “to elect a new president of the Republic who will take Lebanon out of the axes of politics and bring it back into the Arab sphere.”

This position excludes de facto the two candidates close to Hezbollah, while Bkerki, the seat of the Maronite Patriarch, no longer spares criticism of the Iran-linked party.

“Aoun’s mandate has driven Lebanon into the wall,” a source close to the prelate told L’Orient-Le Jour.

“We do not need a president who is only strong among Christians, but a personality with good relations with other communities and who is able to restore ties with Arab countries and the international community,” the source added, explaining Rai’s remarks.

In 2016, Aoun was seen as the natural candidate, being the “strongest” within the Christian community and having secured the largest Christian bloc in the 2009 legislative elections.

Today, many political forces and religious authorities, both Christian and Muslim, want to break away from from this logic.

“The idea that a strong president is needed in Lebanon is now seriously questioned,” a heavyweight from the March 14 camp told L’Orient-Le Jour.

History proves him right. The presidents who were presented as strong, like Bechara el-Khoury, Camille Chamoun, Sleiman Frangieh, Bashir and Amin Gemayel and finally Michel Aoun, have all experienced major crises during their terms.

On the contrary, the terms of presidents who were the result of political compromise, such as Fouad Chehab, Charles Helou or Elias Sarkis, were marked by relatively calmer and more constructive periods for the state.

Western and Arab countries now seem to be making this calculation.

“Serious discussions have begun in relation to the next government and the presidential election,” said a Western diplomat who wished to remain anonymous.

The meetings organized by the Saudi ambassador to Lebanon, Walid Bukhari, who returned to Beirut two weeks ago, in coordination with the French, fall within this logic.

In short: Everyone is preparing for what comes after. “The idea is to put forward competent personalities, with no record of power and who can benefit from the support of the international community,” the diplomat added.

The iftar that gathered Nasrallah, Bassil and Frangieh does not seem to have upset the equation.

After his visit to Paris, Frangieh headed to Moscow where he met with Russian Foreign Minister Sergei Lavrov.

The visit was interpreted in Lebanon as a kind of Russian support for his candidacy for the presidency, especially since Bassil has endorsed the American-Western position condemning Russia in its war on Ukraine.

But, given the current relations between Russia and the West, Moscow's support may be double-edged. Bassil, on the other hand, is continuing his efforts to limit the damage to his party in the legislative elections and to reach an agreement with the US.

Bassil seems to be using the issue of the delimitation of the maritime border with Israel to negotiate the lifting of American sanctions against him and hopes to benefit from the help of Qatar, the small emirate maintaining privileged ties with the US.

L’Orient-Le Jour learned the FPM leader has visited Doha twice in recent months, to negotiate the participation of Qatari companies in oil and gas exploration in Lebanon in exchange for Qatar’s help in improving his relations with Washington.

At the same time, Bassil has announced that he is ready to travel to Syria in the near future.

But such a visit would further reduce his chances of gaining access to Baabda, as the US is not ready to change its position towards the Syrian regime.

“Either he thinks he has no chance anyway, which is not his style, or he is trying to test the waters to see how the West will react,” a senior Arab diplomat told L’Orient-Le Jour.

“Hassan Nasrallah’s iftar had the opposite effect of what Hezbollah wanted. It gave the impression that the presidential election was taking place in [Beirut’s] southern suburbs,” said a senior politician.

“Neither Bassil nor Frangieh have any chance for the next presidential election,” said an Arab diplomat.

So, who’s the favorite presidential candidate at the moment? It is army chief Gen. Joseph Aoun, who maintains good relations with all parties.

However, the West, as well as the Arab countries, do not seem to want to put him too much in the spotlight, so as not to burn out his candidacy.

Apart from the army commander-in-chief, the current conditions would favor a personality from the world of finance, given the fact that Lebanon will need to conclude an agreement with the International Monetary Fund.

In this context, the name of Jihad Azour, the former finance minister under Fouad Saniora’s government from 2005 to 2008, and director of the Middle East and Central Asia Department at the IMF, is also circulating.

But everything can change very quickly in the coming weeks.

“Neither Bassil nor Frangieh.” This is what Progressive Socialist Party leader Walid Joumblatt said about the Lebanese presidential election last week, announcing that he would not vote for either of these two contenders for the top job.While President Michel Aoun's mandate officially ends in October, the presidential race has accelerated a few weeks ahead of the parliamentary elections,...