The traditional parties want to reaffirm their legitimacy with varying degrees of success, all while trying to win a new electorate. In front of them, the opposition forces challenging them seem at a disadvantage in this visual competition among candidates 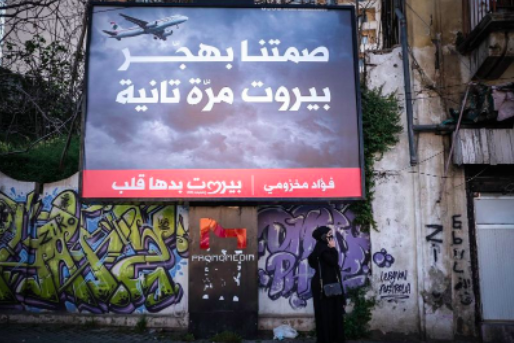 “Our silence will empty Beirut of its inhabitants for a second time” is written on this billboard as part of the list of MP Fouad Makhzoumi. (Credit: Joao Sousa/L'Orient Today)

“Beirut will always be the first,” “They threatened you with their weapons, vote against them,” “We can restore sovereignty,” “Sovereignty and reforms,” “Justice is a responsibility.”

With one month to go before the parliamentary elections, the capital is flooded with slogans attempting to appeal to voters by evoking problems specific to the social, economic and political crises that are plaguing the country.

Many ready-made phrases seem to be repeated, and are especially far from the real concerns of a population exhausted by successive crises. Are these slogans that promise all sorts of reforms likely to convince voters who experienced the popular uprising of Oct. 17, 2019, the Beirut port explosions on Aug. 4, 2020, and who are now facing the worst economic crisis in the history of the country?

A quick trip around the city reveals the various advertisements that differ in design, but whose purpose remains the same: to mobilize the largest number of voters. Journalist and political analyst Walid Hussein, who conducted a survey of election posters throughout the country, believes that the Lebanese Forces have deployed the most resources.

"The LF campaign is visible from Akkar in the north, to Naqoura in the south. However, their slogans are aimed at a Christian and partisan audience. Since the clashes of Oct. 14, 2021 (in Tayouneh, between members of [Hezbollah and Amal] and alleged members of the LF), the party also wants to remind [citizens] that it can face the weapons of Hezbollah," said Hussein.

“We can restore sovereignty,” or “We want and we can,” is written on one of the LF billboards, a reference to the Free Patriotic Movement, to whom the phrase, “We wanted, but we were prevented from doing,” is attributed.

As for Hezbollah, it is reiterating its 2018 slogan, "Protect and build," which it has transformed into, "We continue to protect and build," a way of reaffirming its presence on the local political scene, despite the popular discontent it has been subjected to since the 2019 protests.

"It is a slogan that addresses the hardcore supporters but probably cannot convince other voters," said Hussein.

Phrases that "echo ideas similar to those of civil society," according to Hussein. "[Hezbollah] has dropped the traditional slogans that were more aggressive in an attempt to please an electorate irritated by its performance," he added.

"Except that we are entitled to ask ourselves which justice and what sovereignty we are talking about. Hezbollah paralyzed the government for weeks because of Judge Tarek Bitar, who was in charge of the investigation of the double explosion of Aug. 4, 2020. “It has even extended its influence to Yemen," said Hussein.

The capital is used in every opportunity

In Beirut, where most of the election posters are concentrated, some candidates are using a photo of the explosions at the port as a backdrop, which has not failed to irritate some residents, angry to see their misfortunes used for electoral purposes. Other candidates bet on putting the capital forward with slogans such as "Beirut will always be first," "Give Beirut its soul back," "Beirut Confronts” or "This is Beirut."

While some of these speeches may seem "hollow" given the magnitude of the work to be done in the country, Halim Shebaya, executive director of the Arab Association for Constitutional Law (AACL), explains that this impression is due to the fact that "priority is given to images and posters, rather than explanations of the programs to be put in place.”

"To speak of empty slogans is subjective because those who publish them are convinced of their usefulness. But how do you convince people who have lost everything that there is still hope? This is the great challenge facing the parliamentary candidates. I don't think that a Lebanese will find hope just by reading a slogan on a poster, unless they are a loyal supporter," said Shebaya.

The campaign of the outgoing MP for Beirut, Fouad Makhzoumi, has made the capital his main concern, with the slogan "Beirut needs heart" appearing on posters across the city. "This slogan is not in line with Mr. Makhzoumi's critical stance towards Hezbollah," said Hussein.

Beirut is also the starting point for the posters of Sawa Li Lubnan (Together for Lebanon), the group supported by Bahaa Hariri, the brother of former Prime Minister Saad Hariri. "They stole your money, they threatened you with their weapons, they deprived you of justice… vote against them," reads the Sawa Li Lubnan billboards, which attack the banking sector, the ruling class and particularly Hezbollah and Amal.

A way to send messages that go beyond the local scene, according to Shebaya, is that "the slogans often have a regional and international scope, about some controversial issues, such as Hezbollah, the question of Lebanon's neutrality or the positioning vis-à-vis the West and the East," said Shebaya.

The FPM, in need of publicity?

In the country’s capital, one group less present compared to the LF and Hezbollah, is the Free Patriotic Movement. The FPM seems to be paying the price of the economic crisis, or could potentially be facing the consequence of the American sanctions imposed on its leader, former Minister Gebran Bassil. The few posters of the FPM rely on the slogan, "We were there and we will stay," a way for the party to insist on its commitment despite the widespread criticism towards it, including towards FPM founder and President Michel Aoun.

“We have not seen an FPM campaign worthy of the name," said Hussein. “They had plastered all the walls of Beirut in 2018. Do they have a financial problem?" Hussein asked.

What about the opposition lists? Apart from campaigns conducted on social networks, the advertising signs of the lists born from the 2019 uprising are rare, as these parties undoubtedly do not have the same budget as the political parties in power for decades.

"Opponents need strong campaigns to be able to compete with such a fierce regime that wants to keep power in its hands," warns Shebaya. "Unfortunately, we don't have that right now, but I still hope that the Lebanese will vote against the traditional parties, given the historic crisis we are going through and the explosions of August 4," he added.

For Hussein, it is undoubtedly the abstentionists of 2018 that could change the game in 2022.

"We must know that nothing is certain and that anger smolders under the ashes. I think that those who did not vote in the previous legislative elections will participate this time to punish the ruling class. If they decide to vote, we could see breakthroughs in Beirut II, North Lebanon III, South Lebanon III, Baabda, Zahle or Saida," he said.

“Beirut will always be the first,” “They threatened you with their weapons, vote against them,” “We can restore sovereignty,” “Sovereignty and reforms,” “Justice is a responsibility.” With one month to go before the parliamentary elections, the capital is flooded with slogans attempting to appeal to voters by evoking problems specific to the social, economic and political...