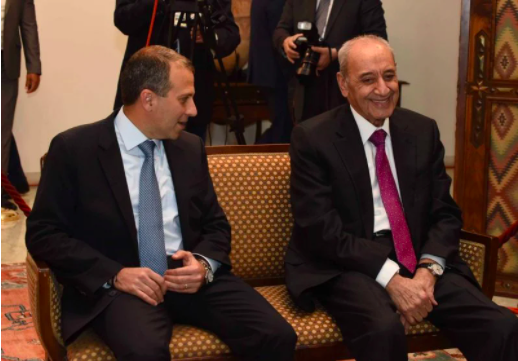 Parliament Speaker Nabih Berri and leader of the Free Patriotic Movement Gebran Bassil during the 2006 dialogue. (Credit: Dalati and Nohra)

For Hezbollah, there’s no room for doubt: it will snatch a victory in the May 15 polls and will retain its majority in Parliament through its allies.

According to several party members who spoke to L’Orient-Le Jour, Hezbollah is banking on the confusion abounding in the Sunni street following Future Movement head Saad Hariri’s withdrawal from political life, and the absence of a united front to face it, to seize a win in the upcoming elections.

The party has set up the largest electoral machine in the country. In the constituencies of Beirut II, Baabda and Chouf-Aley alone, where no more than two candidates are running on the party’s ticket, Hezbollah has deployed 5,000 members in preparation for the vote.

“We are going to throw all our weight behind the battle,” a party official told L’Orient-Le Jour on condition of anonymity.

Hezbollah is well aware that its own candidates are not in danger, but wants to ensure that no votes are lost to its allies, the Amal Movement, and the Free Patriotic Movement.

“We have three objectives: to secure, with Amal, 27 seats for Shiites, to have at least 12 Sunni MPs, and to keep the FPM stable on the Christian scene,” another party official, who also wished to remain nameless, said.

Ideally, Hezbollah would like to field a united front with its two allies across the country. But, the hostility between Amal and the FPM, and the unique political realities in certain constituencies are making it difficult for the Iran-linked party to stay on top of things.

In a recent speech, Hezbollah head Hassan Nasrallah admitted that the formation of electoral lists and alliances could vary from one area to another, and that some constituencies could require two lists based on electoral calculations to benefit both of his allies.

“Amal is aligned with our position on this issue,” the party official said.

Hezbollah is keen to not repeat the same mistakes of 2018 regarding the Shiite seat of Jbeil, which was lost to the party as a result of a disagreement with the FPM.

The party had insisted at the time on fielding Hussein Zeaiter, while the FPM wanted the seat to go to Rabhi Awad. In the end, Mustafa Husseini, who joined Sleiman Frangieh’s bloc, won.

“This time, all Shiite deputies will be affiliated with Hezbollah or Amal, save one seat in northern Bekaa, which will go to either Jamil Sayed or Ali Hijazi, the secretary general of the Baath Arab Party,” the source added.

The two candidates on the party’s ticket in the Bekaa are known to have strained relations with Parliament Speaker Nabih Berri. Hezbollah, however, believes that the head of the legislature would allow this if the party lent it a hand in other constituencies.

The Shiite seat in Jbeil

The most challenging thing for Hezbollah has been to convince Amal and the FPM, who share animosity for each other, to join hands in a common front.

Despite everything and given the current context, both are aware of the need to avoid confrontation on the ground. Berri has lost a strong ally with Hariri’s withdrawal, while the FPM will no longer be able to count on several alliances that were valuable to it in the 2018 polls, whether with independent candidates or Sunni parties.

In Beirut II, a single candidate list will bring together the three parties. The FPM will be represented by a candidate for the evangelical seat, Edgar Traboulsi. Amal will have him as a candidate too.

Meanwhile, Hezbollah is trying to coax one of the Syrian Social Nationalist Party’s two branches — divided between a pro-Damascus camp and another more pro-Lebanon one — by nominating Firas al-Choufi for the Druze seat.

At the same time, Hezbollah agreed with the Ahbash, also known as the Association of Islamic Charitable Projects, to form a second list, necessary for the electoral battle.

Based on the party’s calculations, with its allies running on the same list in Beirut II, Hezbollah would be able to secure four seats: two Shiite, one for Traboulsi, and either a Druze or a Sunni seat. Meanwhile, the Ahbash would secure two electoral thresholds and thus win two Sunni seats. Hezbollah and its allies would thus secure six out of 11 seats in Beirut, compared to only nine back in 2018.

In Baabda, matters are not settled yet, and two scenarios are plausible, according to the party official quoted above.

The first scenario is to have a single list bringing together Hezbollah, the FPM and Amal along with a Druze candidate fielded by Talal Arslan. This would allow this coalition to win three seats, two Shiite, and one Maronite, for the FPM.

Hikmat Dib, the FPM’s other candidate in Baabda, was dropped from the list, before resigning from the party, because of his low chances of winning.

“In any case, Nabih Berri refused to allow his candidates to forge an alliance with Hikmat Diab,” a source close to the legislature’s head told L’Orient-Le Jour on condition of anonymity.

In fact, Dib is one of the FPM deputies most outspoken against the Amal movement.

The second scenario would be for Hezbollah to form a list with Amal alone. Meanwhile, the FPM would have its own with Talal Arslan in a bid to block the way of the Lebanese Forces or a candidate affiliated with the protest movement of Oct. 17, 2019. The battle in this constituency will be for the second Maronite seat.

In the Kesrouan-Jbeil constituency, the deal is sealed. Hezbollah has nominated Raed Berro. Hezbollah and the FPM will also form a single list, which Amal’s partisans are committed to supporting.

In Baalbek-Hermel, alliances have also been solidified. It has been agreed that the FPM will nominate a candidate for the Greek-Catholic seat to replace Ablert Mansour, who is close to the SSNP.

To satisfy the pro-Syrian party, Berri is insisting on the candidacy of Assaad Hardane in Hasbaya-Marjeyoun, to offset Firas al-Choufi’s candidacy in Beirut II.

This brings us to the two constituencies where any alliance between Hezbollah’s allies is the most delicate.

The first constituency is the West Bekaa, where the party is trying to form a list that includes Hassan Mrad, Deputy Speaker Elie Ferzli, and a candidate from Amal and another from the FPM.

This arrangement, however, does not suit FPM leader Gebran Bassil, who refuses to join forces with Ferzli, with whom he had a falling-out, prompting the latter to leave the party’s parliamentary bloc in April 2021.

But Berri insisted on Ferzli’s candidacy. “We are trying to convince both parties to find common ground and reach an agreement. We are quite confident that this is what will eventually happen,” the Hezbollah official said.

The first is the formation of a single list, comprising FPM’s Amal Abu Zeid, and Ibrahim Azar, who is close to the Amal Movement, in addition to a catholic candidate from the FPM allied to a politician in Saida, which could be Abdel Rahman Bizri.

The scenario remains, however, implausible, as Amal sees no electoral interest in it.

The second possibility is to make two lists, dividing the votes of Hezbollah, which is not fielding candidates in this constituency.

Under this scenario, the FPM would ally with Bizri in Saida, and Amal would be represented by Ibrahim Azar, who could ally with candidates representing Bahia Hariri in the area.

“The FPM cannot secure another Maronite seat in this constituency. It must strive to keep the Catholic seat by allying with a strong party in Saida,” the Hezbollah official said.

This article was originally published in French in L'Orient-Le Jour. Translation by Sahar Ghoussoub

For Hezbollah, there’s no room for doubt: it will snatch a victory in the May 15 polls and will retain its majority in Parliament through its allies.According to several party members who spoke to L’Orient-Le Jour, Hezbollah is banking on the confusion abounding in the Sunni street following Future Movement head Saad Hariri’s withdrawal from political life, and the absence of a united...