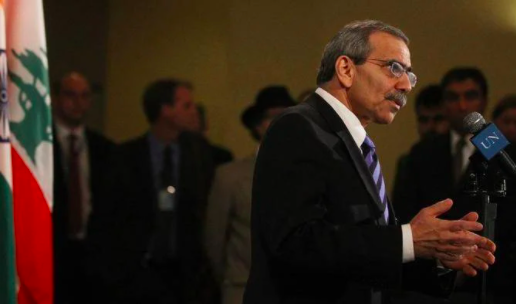 Nawaf Salam, former Lebanese ambassador to the UN and judge at the International Court of Justice. (Credit: AFP)

No one can confirm today whether or not the legislative elections slated for May 15 will actually take place. Not even President Michel Aoun, not Parliament Speaker Nabih Berri or Hezbollah’s leader Hassan Nasrallah.

With many gray areas in the current situation, nothing is for sure. In a country where, in the past, election results could be generally anticipated, things seem to have changed this time around, for several reasons. First, one ought to mention the weight of the forces who claim to represent the Oct. 17, 2019, popular uprising, the alliances forged between these groups in different constituencies and most importantly, the Sunni vote.

The withdrawal of Future Movement leader Saad Hariri from the Lebanese political scene has changed the equation altogether. The stakes are high not only for the 20 MPs who make up the Future Movement parliamentary bloc, but also for the several Christian seats contested in areas where the Sunni electorate can make a difference.

This means that not only the Sunni leadership position is at stake but also the balance of power within Parliament.

The May 15 elections are set to be a battlefield between the country’s two major Christian parties, the Lebanese Forces and the Free Patriotic Movement. The polls will also test the ability of newly emerging forces to translate the Lebanese people’s desire for change into credible and concrete political action.

Most importantly, however, all commentators’ attention will be riveted to the election results to analyze whether or not Hezbollah and its allies maintain the majority of seats in Parliament.

The period between 2016 and 2019 has proved that this majority was somehow insignificant. The Amal Movement and the FPM, both supposedly Hezbollah’s allies, have been at the same time its worst enemies. Meanwhile, the party’s ostensible opponent, the Future Movement, has been serving its interests, acting as a convenient partner of sorts.

But the atmosphere is no longer the same. Hariri bowed out of politics, and hostility to the Iran-linked party seems to be growing within all communities.

The Shiite party has an interest in seeing the elections being held as planned in a bid to reaffirm its political legitimacy, mute the protest movements and benefit from possible international financial aid. But, if it were certain that it would lose its parliamentary majority, Hezbollah would probably not run the risk of allowing the vote to take place.

The reaction of the international community — of which Lebanon would be the last concern if the war in Ukraine continues — the possibility of sanctions, which will not affect it directly, or even an upset of the country’s status-quo, are not big enough deterrents to prevent the party from torpedoing the elections if it deemed them as a real danger.

Is this the case today? The FPM’s insistence that the diaspora vote be limited to a 16th constituency, and on the establishment of electoral megacenters, not to mention the press conference held by Interior Minister Bassam Mawlawi, announcing the thwarting of attacks by Daesh (Islamic State), suggest that Hezbollah might travel down this road.

But for now, the party and its allies have good reason to entertain hopes, if not to win the electoral battle, then at least to limit the damage.

Why? On the one hand, because the Oct. 17 forces have yet to unify their ranks, upholding a discourse not well-constructed enough to make a breakthrough that is up to the challenge.

On the other hand, and above all, a major abstention on the part of Sunni voters, who, although they reprimand Hariri for stepping aside, feel abandoned since his departure, could inevitably play into Narsallah’s hands.

Meanwhile, the LF is today stronger than the FPM within the Christian electorate. But without its Sunni ally, the LF could lose ground in favor of the FPM, which is counting on Hezbollah to make a breakthrough. In other words, the outcome of the Christian battle depends in part on the Sunni vote.

For the time being, no political figure or party is able to fill the void left by Hariri. His brother, Bahaa Hariri, is far from being a veteran politician.

Prime Minister Najib Mikati can only throw his weight around in the north of the country but his moderate approach vis-à-vis Hezbollah prevents him from taking on the role of leader within a community that is today extremely hostile to the Party of God.

Only three men hold real sway within the Sunni community.

The first remains Hariri, who appears to be satisfied that no one has emerged to take his place, and who, because of his status, retains the greatest influence over his community.

The second is former Prime Minister Fouad Siniora, who, despite major disagreements, remains loyal to the Hariri family, not to mention that he seems to have the support of Dar al-Fatwa, which makes him a heavyweight in the Sunni street.

However, Siniora’s lack of charisma compounded by allegations of major corruption stand in the way of him taking on a leading role and courting the people of the thawra (“revolution”).

The third man is Nawaf Salam, who is the former Lebanese ambassador to the United Nations, and currently a judge at the International Court of Justice. He does not fit the profile of a political leader.

Yet, he remains the only man, in the context of the Sunni community, to be able to bring together the traditional establishment and the groups claiming to represent the Oct. 17 uprising, and possibly win the support of the West and Saudi Arabia.

On the national level, he is the figure most likely to achieve reconciliation between the March 14 camp and the Oct. 17 movements.

Salam, who comes from a large political family, remains reluctant to run in Beirut II, and for good reason.

In a country where electoral clientelism continues to be the cardinal rule, funding could be an issue. This is not to mention the formation of lists, and managing Harirists, which is essential but could prove problematic at the same time.

His candidacy can, however, be key. First, for the electoral battle in his constituency, where Hezbollah and its allies could gain ground in the absence of the Future Movement, which secured six out of 11 seats in the 2018 elections.

But if he assumed the lead of a strong list, with no competition from Harirists, meaning that Siniora would give up running in Beirut II, Salam could win a significant number of votes.

At the national level, Salam might be able to embody a Sunni leadership that could appeal to traditional parties such as the LF, Kataeb and the Progressive Socialist Party, but also to civil society movements.

Salam’s candidacy could send a very positive signal to remobilize the Sunni electorate after Hariri’s withdrawal, giving hope of a possibility to turn the page on this chapter. It could also prompt Lebanon’s Sunnis to invest more in the elections and rekindle Saudi Arabia’s interest in them.

With strong alliances in decisive constituencies, this could lead to a defeat for Hezbollah and its allies in Parliament.

Salam is the missing piece in this scenario. He is also one of the keys to what could play out next.

The former ambassador is a man who firmly defends the principles of sovereignty without getting embroiled in the warmongering and sectarian rhetoric which most often plays into Hezbollah’s hands.

He is a moderately radical figure, who fits the profile of a prime minister acceptable by all stakeholders, except Hezbollah.

His victory, associated with that of certain forces of the Oct. 17 uprising and March 14 parties, would probably allow the return of a political confrontation regardless of what this might imply.

This scenario, however, hinges on the holding of elections in the first place.

No one can confirm today whether or not the legislative elections slated for May 15 will actually take place. Not even President Michel Aoun, not Parliament Speaker Nabih Berri or Hezbollah’s leader Hassan Nasrallah.With many gray areas in the current situation, nothing is for sure. In a country where, in the past, election results could be generally anticipated, things seem to have changed...