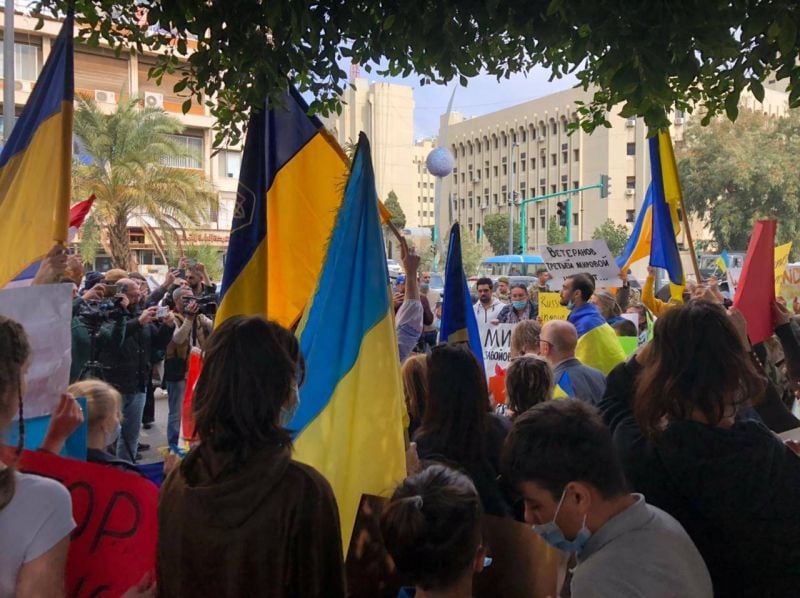 Protesters gather in front of the Russian embassy in Beirut on Feb. 24, 2022 to demonstrate against the Russian invasion of Ukraine. (Credit: Mohamad El Chamaa/L'Orient Today)

BEIRUT — Born in Lebanon, Esmeralda Younes is half Lebanese from her father’s side and half Ukrainian from her mother’s side. She was raised in the Ukrainian-Lebanese community but also had many close Russian-Lebanese friends.

“We speak the same language and we bond well, so I think there was not a problem there until now,” said Younes. “I don’t pick sides, I don’t see people as their nationality, so for me I never ever had a problem, but I definitely think nationwide [in Lebanon] there will be a rift.”

Younes said that already she has seen some Russian-Lebanese people posting on social media to say that “they agree with what’s happening to Ukraine” and that “Ukraine deserves it” and that this is causing tensions among Lebanese Ukrainians and Russians.

The Ukrainian diaspora in Lebanon has been in a state of alarm since Russian President Vladimir Putin announced Thursday morning that he had ordered a “special military operation” in Ukraine, which he portrayed as an act of self-defense, while the United States and its allies have described it as an unprovoked act of aggression. Russian forces launched attacks on locations across Ukraine, prompting international condemnation.

Despite the history of tensions between the two countries, Ukrainian and Russian nationals in Lebanon have traditionally been part of the same community. Many of the Russians and Ukrainians in the country are women married to Lebanese men who traveled to one of the countries to study in universities there.

Around 40 to 50 people — among them Ukrainians, Russians and Lebanese — gathered in front of the Russian embassy in Beirut on Thursday to protest against the attack on Ukraine, holding signs that read “Stop Putin, Stop War,” “Stop madness against Ukraine,” and “Stand with Ukraine,” among others.

Russian troops were spotted on the roof of the embassy by L’Orient Today’s reporter at the scene, looking down at the protesters. A protester told L’Orient Today that one of the Russian soldiers had come down to taunt and threaten the protesters, saying he had killed Ukrainians in Luhansk, a region in Ukraine near the border with Russia that is a stronghold of Moscow-backed separatists.

On the other hand, a Russian woman living in Lebanon for 30 years who joined Ukrainian friends at the protest, told L’Orient Today that she was “embarrassed to say I’m Russian” due to the mayhem caused in Ukraine.

“My family lives in south Ukraine…My father is a doctor and he said that hospitals are full and there are shortages in medications. They attacked bridges, causing the same scene witnessed in Lebanon [by Israeli bombing during the 2006 war] and attacked houses killing children and women,” said the woman, who asked not to be identified by name for fear of repercussions.

On the other hand, a 22-year-old Russian-Lebanese man who also asked not to be named told L’Orient Today, “I totally agree with the Russian stance, as I believe that Ukraine is powerless and would benefit from being part of Russia.”

He noted, however, that neither he nor his family would wish for tensions with their “Ukrainian kin” in Lebanon, adding that at some point “in history both counties were one.”

Nadia Dragon, a Ukrainian mother of three Ukrainian-Lebanese children who has lived in Lebanon for 13 years, said that the “Russian media is spreading misinformation” about the conflict, causing some Russians internationally and in Lebanon to “argue” for the Russian attack.

Another Ukrainian woman who asked not to be identified and who is also married to a Lebanese man told L’Orient Today at the protest: “I have a lot of Russian friends in Lebanon, and we don’t mind the Russian nationals. We are just against the Russian regime. But the Russian media is spreading misinformation to divide both nationalities.”

However, that has not been the case everywhere. Zaynab Raya, a Lebanese-Ukrainian living in the Bekaa, said the relationship between the Russian and Ukrainian communities in the area is not impacted by political events.

“Political events are not affecting us but bringing us closer,” she said. “They [Russians and Ukrainians in Bekaa] are all calling each other and asking about families in Ukraine.”

The Russian-Ukrainian community in Bekaa has a “strong relationship and we used to attend events together because we have the same culture,” Raya said, noting that the Lebanese-Russian Cultural Center in Zahle used to hold events that are both Russian and Ukrainian.

“They were both intertwined and both celebrated the Victory Day of Russia [commemorating the surrender of Nazi Germany in 1945] on May 9. Few people support one of the two entities, and even when they do this doesn’t create tensions between them,” added Raya.

Some members of the diaspora community in Lebanon are directly impacted by the conflict.

Victoria, a Ukrainian married to a Lebanese man, said, “I’m a citizen of Ukraine of Kyiv and my kids are now in Kyiv. They woke up at 5 a.m. to the sound of bombs next to our house, where there is no military base next to us. It’s a civilian place.”

Her Ukrainian-Lebanese children were supposed to come to Lebanon on March 1 but are now unable to because flights from Ukraine have been canceled.

“Ukrainians in Lebanon are outraged, sad and in pain, being away from their loved ones. Not knowing what is really happening is very hard,” Younes said, adding that her grandparents are there all alone and scared in their home.

“Being Lebanese, we know that feeling because, sadly, we are always at war and conflict,” she said.

BEIRUT — Born in Lebanon, Esmeralda Younes is half Lebanese from her father’s side and half Ukrainian from her mother’s side. She was raised in the Ukrainian-Lebanese community but also had many close Russian-Lebanese friends.“We speak the same language and we bond well, so I think there was not a problem there until now,” said Younes. “I don’t pick sides, I don’t see people as...