Experts’ opinions differ on the Consultative Gathering bloc’s chances of boosting their representation in Parliament. 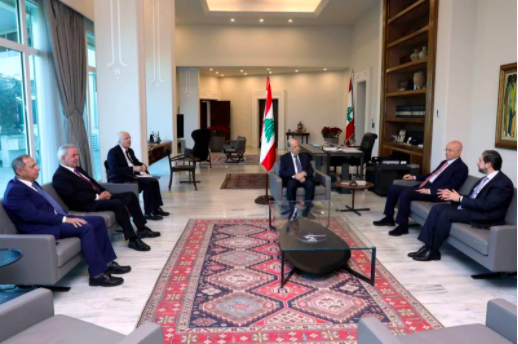 The Sunni representatives of the March 8 Coalition consist of six MPs, but they have never managed to prove themselves a united and homogeneous bloc. Benefitting from wide-based support from Hezbollah and its allies, they were able to make a breakthrough in the 2018 legislative elections, thanks to the new electoral law that is based on a proportional representation system.

These political veterans, who were brought together in an “opportunistic” way, according to some observers, made it to Parliament again, where they rallied under “the Sunni Consultative Gathering.”

With a common objective of standing out from political Harirism, which was until very recently almost the exclusive representative of Sunni public opinion, they have sought to impose themselves as a group on their own on the Sunni political spectrum.

Thanks to the pressure exerted by Hezbollah, and not to their own influence, they managed in January 2019 to obstruct cabinet formation by requiring that two ministers represent them. Yet, they only received one minister in the end: Minister of State for Foreign Trade Affairs Hassan Mrad, who went unheeded in the cabinet.

“I certainly do not regard myself as a member of this group with which there is nothing more than political coordination,” he told L'Orient-le Jour. He recalled that his parliamentary bloc stood out from the Consultative Gathering on many occasions, including with regard to the nomination of Saad Hariri to form a cabinet in 2018.

The pro-March 8 Sunni MPs, who represent around 30 percent of Sunni voters, according to experts, could score high in the next legislative elections, some experts said, particularly since the community’s indisputable leader, Saad Hariri, has removed himself from the game.

They may aspire to win a significant number of votes from the disgruntled voters of Hariri’s Future Movement. According to Kamal Feghali, an expert in elections, the Hariri movement has lost nearly 60 percent of its supporters — a figure that would have partly contributed to Hariri’s decision to suspend his political career. Feghali believes that Hariri’s departure could actually serve this camp, which is expected to grow larger by bringing in new figures, thanks to its alliance with Hezbollah.

According to Feghali’s calculations, there is a high probability that the Sunni representatives of the March 8 coalition form the largest bloc representing the Sunnis in Parliament, especially since the potential pro-Hariri candidates are very few, including Hady Hobeiche and Walid Baarini in Akkar, and Karim Kabbara, the son of Mohammad Kabbara in Tripoli.

In contrast, the pro-Hariri electoral landscape is still blurred and the [potential] candidates are still very reserved [when it comes to their candidacies]. The arena is therefore relatively empty for the pro-March 8 Sunnis, who may be able to almost double their seats in Parliament, Feghali says. However, this forecast is expressed with a great deal of caution, given that the alliances remain unfinalized.

Assem Chaaya, another elections expert, supports a counterclaim. “I absolutely don't think that the March 8 Sunnis will claim a greater representation in the next poll,” he says.

According to him, nowhere does it say that those who voted for Hariri will give their ballot to the opposite political line. That is particularly true since one of the reasons behind the Hariri voters’ disappointment is precisely the modus vivendi with Hezbollah, which a vast majority of the Sunni public was never capable of digesting.

This is probably what will prompt these disappointed voters to move to the center or even more to the right, i.e. to vote for new anti-Hezbollah hawks, such as Bahaa Hariri, Saad’s brother, and Ashraf Rifi, who is allied with the Lebanese Forces.

“When the opponent [Saad Hariri] withdraws from the battle, there won't be any mobilization from either side,” Chaaya said. The absence of the Future Movement from the electoral landscape is likely to negatively affect the turnout of pro-March 8 voters.

Therefore, March 8 Sunni candidates will win, but with low scores, because the tougher opponent is no longer present as he used to be, and the rest of the competitors run uncoordinated in the elections.

According to the expert, the triumph of the March 8 Sunni representatives might not be significant, especially if the groups emanating from the protest movement win a large share of Sunni votes across the Lebanese territory in case they manage to form a united front. Yet, there is no guarantee at the moment that this will come to pass.

Al-Jamaa al-Islamiya is another actor that could pose a threat to the Sunni candidates. The party benefits from strong organization and a well-oiled elections machinery and is far more likely to attract the Hariri voters in North Lebanon, Beirut and Saida.

Some of the March 8 Sunnis may distance themselves from Hezbollah’s ideology in a bid to win moderate votes. Samad, for instance, took a timid step toward the center a while ago and made controversial remarks to some extent about Hezbollah when it comes to Yemen.

A Tripolitan figure, who is close to the Hariri camp, explains this position by the fact that Samad made a career in the United Arab Emirates, a country with which he maintains excellent relations to this day.

In this vein, a source close to Samad told L'Orient-Le Jour that the group has not changed its political line, but the electoral base’s interest is paramount. Ultimately, being elected is only a matter of meeting “electoral threshold percentage,” the source adds.

“Initially, the majority of the Consultative Gathering’s members consisted of former cronies of the Syrian regime who have now sided with Hezbollah. One must not forget that the Shiite party is rejected in their respective areas,” an observer with knowledge about these areas says.

From here stems the state of schizophrenia in which they find themselves today more than ever: preserving their electoral base by presenting themselves as relatively independent and distancing themselves from the pro-Iranian party without denying their initial political line.

The Sunni representatives of the March 8 Coalition consist of six MPs, but they have never managed to prove themselves a united and homogeneous bloc. Benefitting from wide-based support from Hezbollah and its allies, they were able to make a breakthrough in the 2018 legislative elections, thanks to the new electoral law that is based on a proportional representation system.These political...