Will Hezbollah take advantage of Hariri’s absence in Akkar?

A US embassy delegation met with three Akkar MPs close to the Future Movement. 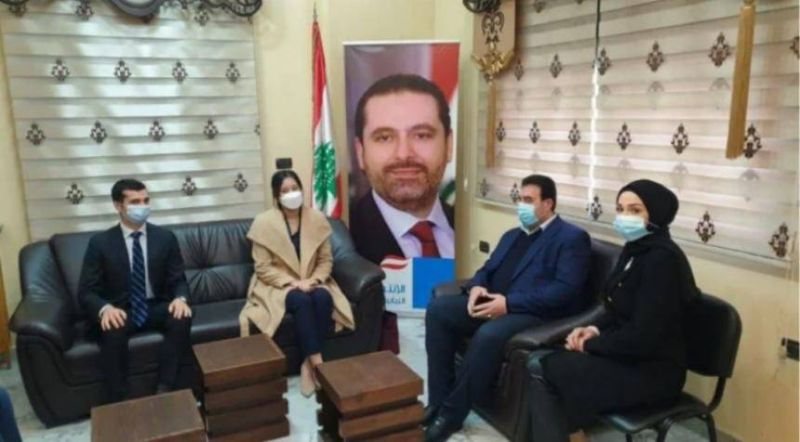 What are the Americans doing in Akkar? A delegation from the US embassy in Lebanon met with MPs close to Saad Hariri and members of the Future Movement parliamentary bloc, as part of a tour in this marginalized North Lebanon region.

A few days after the Sunni leader and his political party announced they would suspend political activity, the visit to MPs Walid Baarini, Tarek Merhebi and Hady Hobeiche was perceived by local media as a sign of international concern about a Sunni scene in limbo.

In the 2018 elections, the Future for Akkar List, consisting of the Future Movement and Lebanese Forces, won 57 percent of the votes [over 76,000 votes], which enabled its candidates to hold five of the electoral district’s seven seats [three Sunni, one Maronite and one of two Greek-Orthodox].

Will Hariri’s absence from Akkar’s electoral landscape serve Hezbollah in the May elections? “Hariri’s absence is bothering the Americans as it could increase the parliamentary majority of Hezbollah and its allies in the event the Shiite party built on the vacuum in the Sunni areas,” said Middle East affairs analyst Joe Macaron.

Joseph Bahout, the director of the Issam Fares Institute at the American University of Beirut, said something similar. “The Americans would have loved to see Hariri opting for a firmer position toward Hezbollah, but they fear that his absence could benefit Hezbollah, or even the fundamentalist movements.”

Hence, the objective of the US tour would be to prevent this scenario from happening. “Both the US and French Ambassadors in Lebanon are conducting tours to assess whether radical figures might fill the vacuum left by Saad Hariri,” Macaron said.

Baarini said that the discussion with the US delegation had focused on development in Akkar. “Political topics were raised briefly and lightly, as the visit focused mainly on humanitarian and development efforts,” he said.

For his part, Merhebi described the conversation with the US delegation as “private” and the local press reports as “individual analyses,” without denying them.

L’Orient-Le Jour tried to speak to Hobeiche, but he could not be reached.

Control of Akkar is key in containing Hezbollah, because the influence of the pro-Iranian party is stronger there than one would think.

Following the fuel tank explosion that killed more than 30 people and injured 80 others in the Akkar town of Tleil, Hezbollah distributed financial aid to the victims’ relatives in September. Back then, the Shiite party denied any ulterior political motives for providing aid, putting the Future Movement on edge.

“It is hard to see a candidate for Hezbollah in Akkar,” Kassem Kassir, a political analyst close to Hezbollah,said. “Nevertheless, Hezbollah has friends in the area.”

The Strong Akkar List, supported by Hezbollah’s ally, the Free Patriotic Movement, and Al-Jamaa al-Islamiya, came second in 2018, with 26 percent of the votes – winning over 34,000 voters, including 5,000 preferential votes for Al-Jamaa al-Islamiya’s candidate Mohammad Chedid.

This result allowed the list to claim two seats [one of two reserved for Greek Orthodox, and the Alawi place]. The list obtained 20 percent of voters in Sunni polling stations.

The Decision for Akkar joint List, which is also supported by Hezbollah and consists of an alliance between Sleiman Frangieh’s Marada Movement and the Syrian Social Nationalist Party, obtained over 14,400 votes, or 11 percent. Since it did not meet the electoral threshold percentage of 14.3 percent, none of the list’s candidates made it to Parliament.

Although Hezbollah could benefit from this vacuum, the three Sunni MPs with whom the US delegation met have not yet decided whether they will run in the elections, all three saying, “We have no announcement to make for the time being.”

“Politics,” Merhebi said, “is now based on power play, not on the quality of each person’s programs and projects.”

Is it possible that the three MPs, who hail from major political dynasties in Akkar and performed well in 2018, will run as independent candidates, or on an LF-supported list, against Hariri’s wishes? The latter had called on “his family within the Future Movement” to follow in his footsteps by stepping down.

The LF could join forces with Ashraf Rifi, a Sunni hawk of the “sovereignist” camp [or anti-Hezbollah political forces], whose stronghold is in Tripoli, but has a presence in several parts of the North.

In 2018, the Rifi-backed Sovereign Lebanon List in Akkar obtained 3.5 percent of the votes, or some 4,000. The list, which was far from meeting the electoral threshold percentage, failed to bring any of its members to Parliament.

One or more lists close to the protest movement could also enter the Akkar race. Miraz Jundi, a founding member of the Akkar Revolutionaries Alliance, told L'Orient-Le Jour that his movement, which is allied with Bahaa Hariri’s Sawa Li Lubnan party (Together for Lebanon) and the Lebanese Opposition Front, will take part in the opposition’s list.

“The absence of the Future Movement would free Sunni voters from their sentiments toward Saad,” Jundi said, “to whom they voted out of loyalty to his father [late former Prime Minister Rafik Hariri].”

CORRECTION: Due to a translation error, a previous version of this article incorrectly quoted analyst Joe Macaron as saying that Western embassies were looking for a figure capable of filling the vacuum left by Saad Hariri. Macaron in fact said that the embassies were assessing whether radical figures might fill the vacuum.

What are the Americans doing in Akkar? A delegation from the US embassy in Lebanon met with MPs close to Saad Hariri and members of the Future Movement parliamentary bloc, as part of a tour in this marginalized North Lebanon region.A few days after the Sunni leader and his political party announced they would suspend political activity, the visit to MPs Walid Baarini, Tarek Merhebi and Hady...