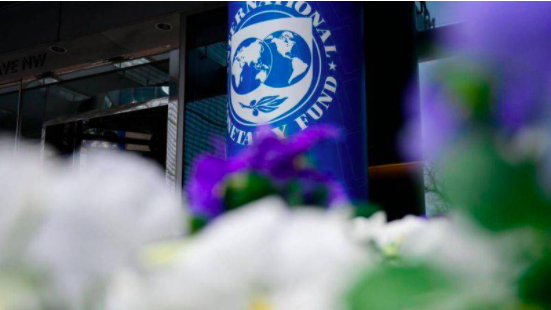 Rosy rhetoric from politicians in recent weeks has given hope for a swift deal with the International Monetary Fund, but on reforms, Lebanon is a long way away from satisfying the fund's conditions. (Credit: AFP)

BEIRUT – In recent weeks, several high-ranking government officials have insisted that discussions with the International Monetary Fund are progressing and that a preliminary deal is around the corner.

However, up until now, minimal information has been shared to support their optimism. The only data point that has been made publicly available is the size of the losses of the financial sector, which, according to Chami, stand at $68-69 billion.

How this number is broken down and who will eventually shoulder the pain – the Lebanese government, the banks’ shareholders or the depositors – are a few of the many questions that remain unanswered.

“The ongoing talks with the IMF are very important for Lebanon to start working on the necessary reforms towards a final agreement, but even though a team has been tasked to negotiate the fine print, it is the government’s prerogative to sign the final deal, and unfortunately the government remains unable to meet,” Parliamentary Finance and Budget Committee head MP Ibrahim Kanaan told L’Orient Today.

The Lebanese government has not met since Oct.12 amid a political standoff over the Beirut port investigation, though Prime Minister Najib Mikati has promised to invite his cabinet to convene to discuss the proposed 2022 budget.

What steps will Lebanon have to take to get the money?

To secure the badly needed $8 to $10 billion in IMF funding it is seeking, Lebanon will have to undertake certain policy actions, known as policy conditionality, before receiving financial assistance.

The fund has published its recommendations for these policies on its website. They include:

• Tackling weak governance. This would require conducting an audit of the central bank and Electricité du Liban.

• Implementing a fiscal strategy. This would require working on debt restructuring, a social safety net and a transparent fiscal framework.

• Establishing a credible monetary and exchange rate system. This would require the unification of the multiple exchange rates accompanied temporarily by formal capital controls.

Where does Lebanon stand on these conditions?

Beyond the parley over the financial sector losses, little progress has been recorded on these conditions.

The forensic audit of the central bank has experienced many delays. The firm Alvarez & Marsal withdrew from the audit job in November 2020 after Banque du Liban failed to provide them with necessary data but, in Sept. 2021, agreed to sign a new contract with PM Najib Mikati’s government, albeit with more strict requirements.

“The whole process – the negotiation, drafting and execution of the contract with A&M – constitutes a typical example of poor governance and failure to safeguard public funds,” he wrote.

As of this writing, questions persist about whether the central bank has followed through with its promise to cooperate and has at last provided the company with the data it requires. Further complicating the matter is the recent announcement by the BDL employees' union, which made clear their refusal to give “to those in charge of the financial and forensic audit the names and salaries of current and former employees of Banque du Liban, as well as [information concerning] the transactions on their bank accounts.”

When contacted for comment on whether the central bank had surrendered the requested documents to the auditors, a BDL spokesperson referred L’Orient Today to the Finance Ministry. A ministry spokesperson declined to comment.

Whatever the case may be, the law temporarily lifting banking secrecy on public accounts has expired, lapsing on Dec. 29, 2021, and Parliament has not yet acted to extend it.

On the fiscal side and in matters related to the budget, up until June 2021, government finances managed to eke out a small surplus, and Lebanon may have ended the year with a balanced budget for the first time since at least the early 2000s.

However, the improvement in public finances can be simply attributed to a 118.89 percent increase in value-added tax collections driven by double-digit inflation, a 173.81 percent increase in telecom receipts due to an uptick in services still priced at LL1507.50 to the US dollar, and a drop of 29.2 percent in interest payments, on the back of Lebanon’s default on its debt in March 2020.

For 2022, a new imperative will govern the preparation of the budget. In the wake of BDL Gov. Riad Salameh’s proclamation that the peg at LL1507.5 to the US dollar is no longer realistic, the Ministry of Finance has been seriously at work reviewing the different scenarios that could emerge from the adoption of a new official rate.

Whether the new rate will be set to LL6,000 or LL12,000 to the US dollar, or whether Salameh will manage to convince Finance Minister Youssef Khalil to set the Sayrafa rate (currently priced at LL24,500 to the US dollar) as the ultimate benchmark, are matters still under debate.

A rate set too low would not be credible in the eyes of the international community, and setting it too close to the parallel market rate is bound to wreak havoc on the economy.

The adoption of a new official exchange rate is not a pen and paper exercise. It will have real consequences for citizens, since all prices will reset at the higher rate once implemented; from customs charges to telecom charges, to foreign currency retail loan repayment, to public and private sector salaries and finally to the restatement of financial statements (when lira are converted to US dollars). Inflation will continue to trend in the double if not triple digits.

“The problem is with the yardstick: the lira is worthless. Measuring inflation using the lira as a benchmark is no longer correct. For a country like Lebanon, the economy should have been dollarized a long time ago, and now is as good a time as any,” economist Hassan Khalil told L’Orient Today.

Kanaan, for his part, noted that approval of the 2022 budget is unlikely to happen immediately.

Then there is the IMF recommendation pertaining to the implementation of a credible monetary policy, starting with the dilemma of unifying the exchange rates. At present, Lebanese are having to deal with five different rates:

• The otherwise-defunct official peg of LL1507.5 to the US dollar is still being used in all matters related to government business.

On the issue of capital controls, Kanaan said the recent debacle surrounding the last-minute changes made to the latest capital control draft law (introduced on Dec. 1), which were seen by many as overly friendly to banks, has effectively rendered it “dead.”

The valid version, he continued, is the version that was previously prepared by the joint parliamentary committees. It could require one meeting for minor reconciliations, but then it will be ready to be sent to Parliament and voted on.

One final concern for the IMF related to the restructuring of the financial sector, and more specifically, to the distribution of losses, is foreign currency deposits at commercial banks. From a high of $124 billion in August 2019, foreign currency deposits marginally retreated to $105 billion in October 2021. After accounting for US dollar cash withdrawals, much of which are now in the form of cash stashed in homes, international transfers and the paying down of foreign currency loans, the amount of lollars voluntarily withdrawn into lira under the different circulars (148,151,158,161) remains largely nominal, although the exact figure is not known.

At present, the government has started to seriously consider the compulsory conversion of part of the foreign currency deposits back into lira, in the hope of reducing the size of the gap between the banks and the central bank’s foreign currency liabilities relative to their assets.

In a recent series of tweets, economics journalist Mohammad Zbeeb revealed that the government’s plan is based on aggregated data collected from the central bank pertaining to lira-to-US dollar conversions and to interest payments on US dollar deposits.

The data indicates that $28 billion (a number attributed to Mikati) to $37 billion in foreign currency deposits were converted from lira to US dollar between 2019 and 2021, and that $30 billion has been paid in interest on the US dollar deposits made between 2014 and 2021. Zbeeb indicated that most of the $37 billion and at least half of the $30 billion paid in interest will be converted back to lira at the rate of LL8,000 to the US dollar.

The government’s thinking regarding deposit lirafication was subsequently confirmed by Nahas during his interview with LBCI, but he provided no further details. Nahas did not respond to a request for comment.

If this comes to pass, the government will succeed in writing off $50 to $60 billion in foreign currency liability in one fell swoop. But if this step is part of the fair losses distribution promised by Mikati, how it will protect the rights of small depositors remains unclear. Also hanging in the balance is the fate of the remaining deposits, as well as that of loans priced in US dollars.

The new year is shaping up to be a critical one for the country. Parliamentary elections on one side, and negotiations with the International Monetary Fund on the other, will determine the trajectory of the country for the next five to 10 years.

Khalil expressed his concerns about the social ramifications of the crisis facing Lebanon. He fears that the loss of livelihoods has pushed many of the Lebanese to the breaking point.

Kanaan, on his side, was wary about recent developments on the political front, and their potential spillover effect on the reforms process timeline.

“This is no longer politics, this is an all-out war,” he said.