The meters seem to be reset after the failure of a package deal involving a barter over Bitar’s fate and the appeal for the invalidation of the electoral law presented by the FPM before the Constitutional Council. 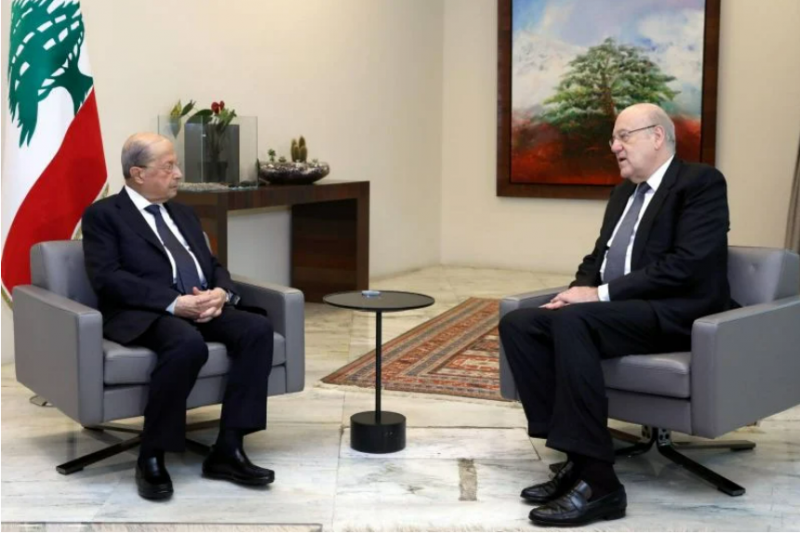 Aoun raises the bar: the government in return for legislative and ... presidential elections Michel Aoun speaking with Nagib Mikati, December 1, 2021, in Baabda. (Credit: Dalati and Nohra)

As part of his efforts to get the government, which has been in a forced coma for nearly two months, back to life, the President of the Republic seems to have stepped his negotiation efforts up a notch. For Michel Aoun, the stakes are high: it is a matter of saving the last months of his six-year term from political deadlock — which is currently being driven largely by his ally Hezbollah — and, above all, to ensure his succession in Baabda Palace.

For Aoun and his camp, the equation is now the following: the revival of the cabinet in return for the holding of the next legislative elections. This is how several observers interpreted for L'Orient-Le Jour the position expressed last Wednesday by Baabda regarding the blockage of the cabinet, which has not met since Oct. 12 in the face of a boycott by the Shiite ministers of the Hezbollah-Amal tandem. They have conditioned their return to meeting on the removal of the judge in charge of the investigation into the port blast, Tarek Bitar.

According to sources who spoke to L’Orient’s political correspondent, Aoun told Prime Minister Najib Mikati during their meeting on Wednesday that he will no longer accept the system of "exceptional approvals" that allow the executive to take decisions in the absence of a working government.

"This is a position of principle. The Mikati cabinet is not responsible for day-to-day business and is able to meet," a source close to the Baabda palace told L’Orient.

Is this a veiled threat linked to the legislative elections that are supposed to take place in a few months?

"It is up to the government to form the Supervisory Commission for Elections, which will have to control the electoral process and the respect of the electoral law during the campaigns," said an analyst contacted by L’Orient.

In addition, the government must set the budget for the organization of the elections, which has not yet been done.

The head of state's refusal to sign off on the exceptional approvals could postpone the election, if the cabinet does not emerge from its lethargy soon. Already on Nov. 19, Aoun had made it known that he would not sign a decree convening the electoral college for an election to be held on March 27 (the date adopted by Parliament and which, along with the issue of the diaspora vote, is the subject of an appeal by the Free Patriotic Movement to the Constitutional Council) and would only accept the dates of May 8 or 15, 2022.

Is Aoun caught up in presidential calculations a few months before the end of his term? If the question arises, it is because he has given multiple signals in recent days of a desire to stay in Baabda beyond Oct. 31, 2022.

After his famous "I will not hand over power to the vacuum" comment, Aoun stressed, during an interview last Monday from Doha, that it would be up to the Parliament to decide whether he should stay in the palace or not.

"The head of state would be looking for a package deal that would cover the revival of the cabinet, but also, and above all, on his succession in Baabda, on which the organization of the legislative ballot will depend," explained the analyst quoted above.

He is joined on this point by someone close to Parliament Speaker Nabih Berri.

"Some people are undermining all agreements by linking them to presidential calculations," said the latter, in a dig at Aoun.

He thus explained the failure of the agreement that the three power players — Aoun, Berri and Mikati — had hammered out during their meeting on the occasion of Independence Day. This agreement stipulated that the political aspect of the investigation of the port would be entrusted to the Supreme Council responsible for judging presidents and ministers and no longer to Bitar.

"We only want the Constitution to be applied in this respect," said the source close to Berri, acknowledging that the latter is at odds with Hezbollah on this point, with Hezbollah wanting to unseat the judge outright.

Another compromise seems to have fallen through, also because of "presidential calculations," he added, alluding to the agreement around a package deal providing for the holding of a parliamentary session to discuss the possibility of referring the political figures to be prosecuted before the Supreme Council in return for accepting the appeal to invalidate the amendments to the electoral law presented by the FPM before the Constitutional Council. Media reports recently indicated that the Aounists would be ready to ensure the quorum required for such a session, without voting in favor of the recourse to the Supreme Council.

Berri refused this proposal and also refused another idea that only a few Aounist parliamentarians would vote for such a move, reports L’Orient’s political columnist, Mounir Rabih.

The result: "The government is there, but the cabinet does not meet," as Mikati said when he left Baabda on Wednesday.

Especially since the FPM seems "determined to vote as it sees fit," in the words of an FPM parliamentarian.

As part of his efforts to get the government, which has been in a forced coma for nearly two months, back to life, the President of the Republic seems to have stepped his negotiation efforts up a notch. For Michel Aoun, the stakes are high: it is a matter of saving the last months of his six-year term from political deadlock — which is currently being driven largely by his ally Hezbollah —...