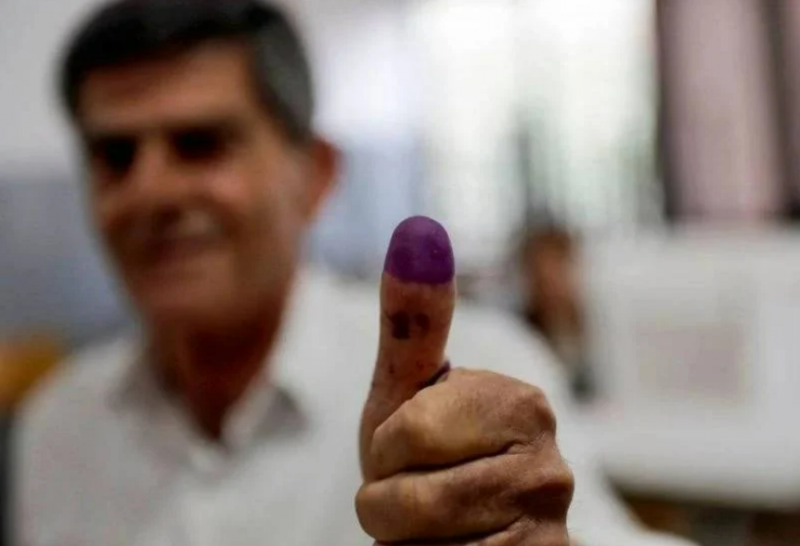 A voter shows his ink-stained thumb after voting in the last Lebanese legislative elections, in Jbeil, on May 6, 2018. (Credit: Joseph Eid/AFP)

BEIRUT — Amid a political deadlock that has prevented the cabinet from meeting since Oct. 12 and with just months before the scheduled 2022 parliamentary polls, the new Supervisory Commission for Elections, a key government body that monitors elections, has not yet been formed.

A spokesperson for the Ministry of Interior told L’Orient Today that the reason the new commission has not been formed yet is that the cabinet has not met to make the appointments. The Interior Ministry is ready to present its list of nominees at the very first meeting of the cabinet, the spokesperson asserted. Until appointments are made, the previous commission remains in charge.

The lack of action on formation of the commission has led some observers to question whether preparations for the election can be completed on time.

“We are a few months away from the e-day. The absence of an effective elections supervisory commission will result in a flawed election, threatening [to exacerbate] the already chaotic environment in the country,” a representative of the election monitoring group Lebanese Association for Democratic Elections (LADE) said.

The Supervisory Commission for Elections is an 11-member body created by the 2017 electoral law to replace a similar 10-member body created under the 2008 law. The commission is tasked with monitoring candidates’ compliance with campaign finance and advertising regulations; accreditation of local and international election observers who will monitor elections and media wishing to run paid election advertising; adjudicating complaints; supervising the conduct of opinion polls; and promoting voter education.

Its membership is composed of three judges, two lawyers, an accountant, representatives of the press and civil society, and experts in elections and advertising. Candidates are nominated by various stakeholders, such as the Beirut and Tripoli Bar Associations, and appointments are made by the cabinet “at the suggestion of” the Interior Minister.

The Interior Minister sent letters to the various nominating authorities on Sept. 23, according LADE, inviting them to submit names of candidates for the Commission, but the process subsequently stalled due to the inability of the cabinet to meet since Oct. 12 amid a political deadlock over the fate of Beirut port investigation head Judge Tarek Bitar.

At this point in the preparations for the 2018 elections the commission's members had long since been appointed. During that election cycle, the commission’s members were appointed nine months in advance of the polls.

This time, the potential election date of March 27, 2022, approved by Parliament but currently undergoing a challenge at the Constitutional Council, is less than four months away.

Set up to succeed?

Election monitors noted that the issue is not only the formation of the commission, but giving it the tools to do its work on time.

While the appointment of the commission is significantly more delayed this time around, funding of the body has been an issue in the past.

In the last election cycle, LADE’s senior projects coordinator, Dayana El Baba, said “They gave the last commission the financial means on April 18, 2018, when the elections were on May 6.”

She characterized this as short notice for a body that has to review financial disclosures and monitor media bias and suggested that this was deliberate.

“Can you believe this is a supervisory commission that does not have any means to work because there was no political will for them to work?”

The reason for the delay, El Baba surmised, was because 11 ministers, including the then-Interior Minister, Nohad Machnouk, were candidates for parliament and may have wanted to avoid scrutiny from the commission

According to LADE, the old commission's work “was ineffective. It took the role of merely an observer amidst a wide range of violations, including the use of public facilities, institutions, universities, public and private schools, and places of worship for conducting electoral campaigns in clear violation of the prohibitions stipulated in the law in Article 77.”

Al Baba added that LADE has called for the formation of a permanent commission, independent of the financial and human resources of the Interior Ministry, to “operate and manage two things: observe the expenditure ceiling of all candidates and to manage the media campaigning.”

She called on the Interior Minister to form the commission and “give them all the resources needed to do their work.”

The commission’s makeup is just one of the questions surrounding the fate of the 2022 elections. Even the date of the polls is up in the air.

Initially set for May 8, the elections were moved to March by Parliament, ostensibly to avoid campaigning during Ramadan, which will likely last from April 2 to May 2.

President Michel Aoun and his allies are fighting to move elections back from March to May, citing bad weather, Lent, and the fact that additional people will reach voting age in the interim.

The next parliament will decide the new president when Aoun’s term is set to end in October. In an interview with Al-Jazeera on Monday, Aoun said he will leave at the end of his term “unless Parliament says otherwise… but it is not desirable or planned.”

In one potentially positive sign for the elections, however, the Interior Ministry met Wednesday’s deadline to make appointments to the Primary Registration and Higher Registration committees, responsible for tabulating and aggregating votes in each constituency.

There are dozens of Primary Registration Committees (PRCs), each of which is composed of one judge as chair, a municipal council member in the respective electoral district and a representative of the Personal Status Directorate; and Higher Registration Committees (HRCs) composed of a high-ranking judicial official, another judge, an inspector from the Central Inspection Board, and a rapporteur from the Personal Status Directorate.

Each electoral district carries one or more PRC, joined by an army of poll workers, reaching 14,816 in the last election cycle. Its role is to adjudicate challenges to the voter lists, facilitate polling and tabulate results, which are then sent to the Higher Registration Committees. From there, the final results are aggregated. HRCs also tackle appeals from PRCs.

But whether these committees are joined by an empowered Supervisory Commission for Elections will depend on whether political factions reach a solution to the stalemate in cabinet.

BEIRUT — Amid a political deadlock that has prevented the cabinet from meeting since Oct. 12 and with just months before the scheduled 2022 parliamentary polls, the new Supervisory Commission for Elections, a key government body that monitors elections, has not yet been formed.A spokesperson for the Ministry of Interior told L’Orient Today that the reason the new commission has not been...

Our full breakdown of newly elected MPs by party affiliation

In Zahle, a traditional battle and an advantage for the Lebanese Forces