Here’s what happened yesterday and what to expect today, Tuesday, Nov. 30 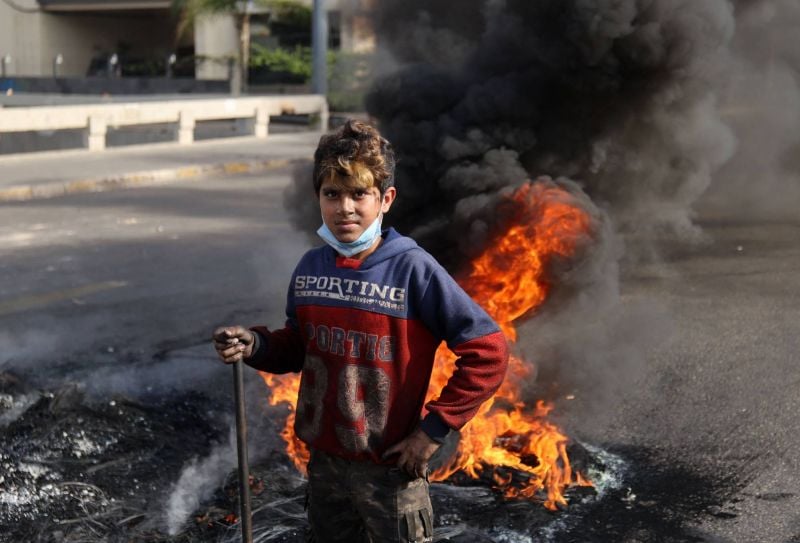 A Lebanese youth stands by burning tires blocking a road during a protest in the capital Beirut on Nov. 29, 2021, as the country struggles with a deep economic crisis. (Credit: Anwar Amro/AFP)

Protests and roadblocks caused disruption around the country yesterday morning as demonstrators assembled to air grievances with soaring inflation and subsidy cuts as the national currency continues to depreciate. In Beirut, demonstrators used cars and burning tires and dumpsters to block roadways in the capital’s central area, as well as at the Cola roundabout and on key highways nearby, bringing traffic to a halt on the first day of the working week, although roads were largely reopened by the afternoon. Meanwhile, in the north, protesters used barricades and parked vehicles to block the main roadways connecting Tripoli to surrounding regions. In Saida, roads were also cut. The sudden apparition of roadblocks in multiple cities was momentarily reminiscent of the Oct. 17 2019 uprising — which saw weekslong recurrent roadblocks across the country; however, while the 2019 actions were carried out by anti-establishment protesters, on Monday many observers pointed fingers at traditional political parties, and particularly the Future Movement of former Prime Minister Saad Hariri, as being behind the roadblocks. The morning’s demonstrations came after the lira-to-dollar exchange rate reached LL25,000 last week and as a cabinet paralysis wrought by disagreement among government ministers over the Judge Tarek Bitar’s leadership of the Beirut port blast probe persists.

Michel Aoun yesterday commented on the impending end of his term as president, saying he will “not accept a political vacuum,” will not extend his tenure and will not leave office before his mandate expires. What this means in the event that there is no agreed-upon successor to the Free Patriotic Movement founder, whose term ends in October, is unclear. Aoun’s election to the post in 2016 ended a 29-month vacuum following the end of Michel Sleiman’s presidency. Lebanese law limits presidents to one six-year term in office, but in 2004, Parliament gave its exceptional approval to extend the term of then-President Emile Lahoud by three years. Aoun’s remarks were reported in an interview with Al-Raya newspaper, given during an official visit to Qatar to attend the opening ceremony of 2021 FIFA Arab Cup football competition. The president also told the paper that he will encourage Qatar’s emir to invest in Lebanon, describing the country as “fertile at the moment” despite being mired in one of the worst financial crises of the modern age.

The Lebanese committee tasked with negotiating a financial rescue package with the International Monetary Fund has reached a “unified vision” on the figures in the financial and banking sectors, officials said. ​​After meeting yesterday with the group assigned to the negotiations, Deputy Prime Minister Saade Chami explained that the prior “dispute has ended” and there is an agreement on all figures between himself, BDL head Riad Salameh, the prime minister and the finance minister.” His comments came after the former government’s International Monetary Fund negotiation team reportedly differed on financial sector losses, a dispute that had halted IMF talks last year. However, when asked about the timeline for seeing results from the IMF talks, Chami replied, “we hoped we could reach a preliminary agreement before the end of the year … however, there might be a slight delay.”

Energy Minister Walid Fayad will meet with his Qatari counterpart today to discuss potential cooperation on energy plans. According to a statement from the Lebanese Energy Minister, Fayyad, who is in Qatar on an official visit alongside Aoun, will use the meeting to follow up on the meeting of President Michel Aoun and Qatari Emir Sheikh Tamim Bin Hamad al-Thani, and to discuss potential “cooperation between the two countries in general, and on the level of energy in particular.” For decades, Lebanon’s energy sector has struggled to secure enough fuel to offer residents more than a handful of hours of electricity per day. A deal to import power from Jordan and Egypt has yet to come to fruition, and the arrival of the ship carrying 31,000 tons of fuel from Iraq in September has not led to a widespread improvement in the country’s power supply. With the state providing only a few hours of energy per day, residents and businesses across Lebanon are now heavily dependent on subscriptions to private generator services, which, with state subsidies on fuel effectively over and the lira’s value crumbling, continue to become increasingly unaffordable to many residents.

Want to get the Morning Brief by email? Click here to sign up.Protests and roadblocks caused disruption around the country yesterday morning as demonstrators assembled to air grievances with soaring inflation and subsidy cuts as the national currency continues to depreciate. In Beirut, demonstrators used cars and burning tires and dumpsters to block roadways in the capital’s central area, as...