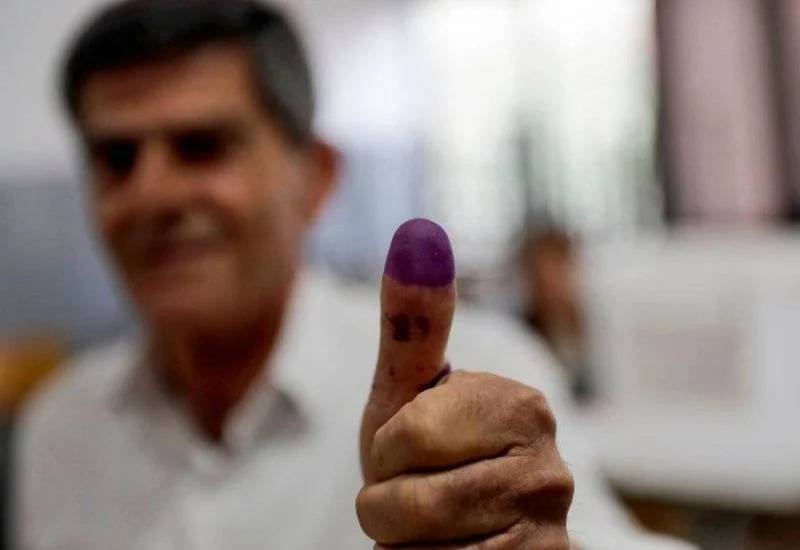 ˇA voter shows his ink-stained thumb after voting in the last Lebanese legislative elections, in Jbeil, on May 6, 2018. (Credit: Joseph Eid/AFP)

The countdown has begun — or has it? For the second time, Parliament adopted on Thursday an amendment to the electoral law setting March 27 as the date for the parliamentary elections, six weeks earlier than the date initially set. The interior minister, however, retains the possibility of setting another date, while President Michel Aoun, who is notoriously opposed to this timetable, is still threatening to appeal for its invalidation — plunging this vote into the uncertainty that now defines much of life in Lebanon.

What is certain, however, is how crucial these elections will be. They will come in the midst of an apparently unstoppable economic meltdown, following a record-breaking explosion at the Beirut port, and amid rampant COVID-19 cases. These crises have defined Lebanon’s two years from hell — but our system has been decaying for much longer.

Since the end of the Civil War, a small elite clique has used corruption, clientelism, sectarianism and the protection of illicit weapons to entrench an unequal, ineffective economic system. All throughout, this elite held elections to propagate the mirage that Lebanon was a functioning democracy — when, in reality, they held the reins to every lever of power in the country.

If there is a single silver lining in the compounded crises of the last two years, it is the unprecedented awareness among Lebanon’s people of just how corrupt the system is, and how urgently it needs change. And next year's municipal, parliamentary and presidential elections provide a opportunity to create a real political shift and a first shot at accountability.

The legislative elections are arguably the most important, as Lebanon’s next Parliament could vote on everything from economic reform packages to major changes in governance structures — and the successor to Aoun. But that vote is also deeply flawed. First, it remains governed by a complex electoral law that has enshrined a variable threshold between 9 percent and 20 percent for candidates to break through. The threshold is one of the highest in the world, compared to 5 percent in some elections in France and 0.65 percent in the Netherlands, and places formidable obstacles in front of any independent candidate. Second, the vote is still overseen by the Interior Ministry. In other words, the political class wrote the rulebook and they will be refereeing the match — making it easy to hijack the results to protect their grip on power.

The Lebanese Center for Policy Studies estimated that at least half of voters in the 2018 elections were subject to direct or indirect vote-buying — resulting in an artificially high voter turnout to the benefit of the traditional parties.

To break that cycle, some have recommended changing Lebanon’s voting law yet again. But launching into an electoral reform process now is too risky: it will inevitably prompt a long and convoluted debate, which the political elite could easily seize on to indefinitely delay the elections — and consequently evade real accountability.

To guarantee free and fair elections that take place on time, Lebanon needs an independent election management body (IEMB). The IEMB model has been used around the world, particularly for sensitive election periods — from Palestine following the signature of the Oslo Accords, to South Africa after the end of the apartheid, and Bosnia and Herzegovina. As they are institutionally independent of the executive branch, they minimize the risk of political tampering. They can otherwise be structured depending on each country’s needs, with various teams focused on operations, procedural and legal considerations, and campaign finance, among others. And, most importantly, they can be rolled out within a few months. During Tunisia’s uprising in 2011, the creation of an IEMB took two months (between February and March) to prepare for the elections that were held in October of the same year.

In Lebanon, the IEMB would be composed of at least five independent Lebanese commissioners known for their integrity, professional reputation and independence from any political party. These commissioners would operate a broader secretariat responsible for the voting process from start to finish, including training election staff, printing the ballots, managing expatriate voting, candidate registration, and press coverage and spending. Integrity and professionalism in these processes are essential to avoid the egregious abuses of the electoral process that have taken place in the past. In the last elections in 2018, some Lebanese media sold journalistic content to candidates that was never disclosed as advertising. It included interview time, news reports, live coverage etc., was estimated to have a value of millions of dollars and was never revealed as part of the permitted spending per candidate defined by the electoral law. Under an IEMB, such practices would be closely monitored and punished.

The secretariat would include international experts to shape the process, guaranteeing that registering, voting and counting take place in full transparency and in accordance with international standards. Election results would be overseen by the IEMB’s registration committees. Moving forward, the IEMB would create a new electoral law that would be fair and representative to all.

The IEMB is the solution to Lebanon’s election quagmire. Taqaddom developed a policy paper last July to lay out the IEMB process — and the position has been endorsed by a broad range of like-minded opposition parties, including the Kataeb party, Independence movement, Minteshreen, Liqaa Teshreen, Khat Ahmar, Tahalof Watani, Nabad el Janoub, Coalition of the North Revolutionaries, Thouwar Akkar, The Lebanese Diaspora Network and the Collectif des Libanais en France. By establishing such an institution, public trust in the election process would increase, generating more participation and a more solid mandate for incoming parliamentarians. But we cannot do it alone: Lebanon’s international partners must pressure for the creation of an EMB as part of the required reforms in the negotiations with the IMF, the World Bank or the EU, and even brandish the threat of tangible sanctions if the Lebanese authorities refuse to deliver.

Legitimate elections will mark the start to Lebanon’s long road to recovery. Trip up on the first step, and we'll be tumbling for the rest of the journey.

The countdown has begun — or has it? For the second time, Parliament adopted on Thursday an amendment to the electoral law setting March 27 as the date for the parliamentary elections, six weeks earlier than the date initially set. The interior minister, however, retains the possibility of setting another date, while President Michel Aoun, who is notoriously opposed to this timetable, is still...