Here’s what happened yesterday and what to expect today, Wednesday, Oct. 20 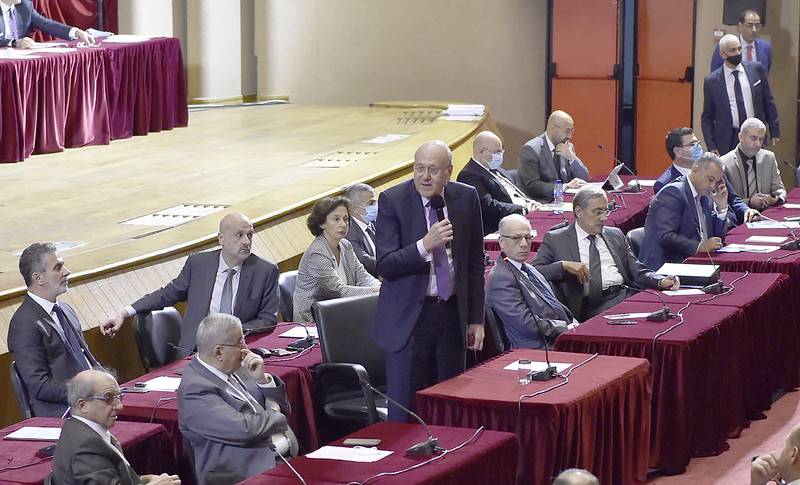 Parliament agreed yesterday, in the first meeting of its regular session, to move up next year’s legislative elections from May 8 to March 27. Observers have been split as to the parties’ reasoning for wanting to hold the vote early. While MPs supporting the move say it will avoid having campaign season overlap with Ramadan, others have said it is a strategic move by traditional parties to bolster their electoral changes against opposition parties while still others have called it an attempt to undercut the current cabinet by curtailing its tenure. The MPs also decided to have expat voters cast their ballot in the constituency they are registered in in Lebanon and sent a proposal to establish a quota for women MPs back to the joint parliamentary committees for further consideration.

Lebanon has begun negotiations with the International Monetary Fund that it hopes will help the country emerge from the precipice of total economic collapse. Jihad Azour, who heads the IMF's Middle East and Central Asia department, told Reuters that Prime Minister Najib Mikati has requested help from the group, and that technical negotiations have begun. Mikati’s spokesperson told L’Orient Today that Lebanon is compiling and submitting financial documents required as part of a program for cooperation with the IMF, which the government hopes to finish by the end of the year. Talks with the IM deadlocked last year, primarily because Lebanon’s central bank, banks and politicians could not agree on the extent of the financial system’s losses with the previous administration.

Armed clashes between two families in the village of Wadi Jamous in Akkar continued yesterday for the third day in a row, leaving at least four people killed and seven injured. The dispute occurred between Sayyid and Tartousi families “for reasons of old vengeance,” an army statement released on Tuesday reported. “Army units deployed in the area intervened and worked to arrest those involved and restore [calm to] the situation,” the statement said, without providing further information about casualties. With tensions high, MP Tarek Merhebi (Future/Akkar) called on residents of the area to follow the army’s instructions, and MP Walid Baarini (Future bloc/Akkar) traveled to the conflicted area and called on residents to stop the bloodshed.

Judge Tarek Bitar set new interrogation dates for next week for MPs Nohad Machnouk and Ghazi Zeaiter. The two officials have been summoned for questioning in the Beirut blast probe on Oct. 29, a judicial source told L’Orient Today. According to Parliament’s bylaws, judicial procedures involving sitting MPs can continue without Parliament’s authorization if they began when the legislature was not in session. In other words, the legal immunity afforded to parliamentarians does not shield Machnouk and Zeaiter in Bitar’s investigation. However, the two parliamentarians and former ministers, who have repeatedly resisted cooperating with the investigation, are unlikely to turn up. Meanwhile, former Prime Minister Hassan Diab’s interrogation is scheduled a day before theirs, on Oct. 28.

The first criminal case in Lebanon alleging slavery and slave trading of a migrant domestic worker was brought to the halls of justice yesterday, but the hearing was postponed after the accused failed to appear. The case was filed on behalf of a 38-year-old Ethiopian woman by Legal Action Worldwide (LAW). It alleges that the woman, who came to Lebanon under Lebanon’s widely criticized kafala, or sponsorship, system, was imprisoned in the home she worked at for nearly eight years, with her passport confiscated, and was not paid her salary, according to Fatima Chehade, LAW’s Lebanon program manager. Outside the Baabda Justice Palace, where the case was set to be, several migrant domestic workers and representatives from human rights organizations gathered in support of the woman. However, the defendants — the woman’s sponsor and the recruiter who brought her to the country, whose names were not released — failed to turn up, and the judge postponed the session until February 2022. If the defendants fail to present themselves again, the firm can ask the judge to issue arrest warrants for them, Chehade told L’Orient Today.

Human Rights Watch released a report today alleging widespread human rights abuses committed by the Syrian government against refugees returning from Lebanon and Jordan. Among 65 returnees and family members whose cases were documented, HRW found 21 cases of arrest and arbitrary detention, 13 cases of torture, 17 enforced disappearances, three kidnappings, five extrajudicial killings, and one case of alleged sexual violence. The report’s release follows the release of a report with similar findings by Amnesty International last month, as well as a series of controversies in Lebanon over attempts by authorities to deport Syrian refugees.

Want to get the Morning Brief by email? Click here to sign up.Parliament agreed yesterday, in the first meeting of its regular session, to move up next year’s legislative elections from May 8 to March 27. Observers have been split as to the parties’ reasoning for wanting to hold the vote early. While MPs supporting the move say it will avoid having campaign season overlap with Ramadan,...