Where has the ‘thawra’ gone?

Opposition groups appear to be adopting different strategies, focused mostly on the upcoming legislative elections, in a bid to make a breakthrough on Lebanon’s political scene 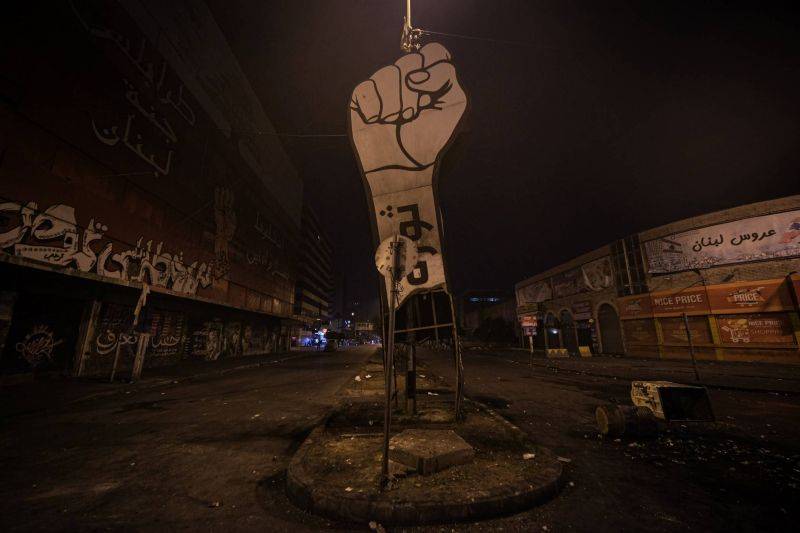 The fist, symbol of the ‘thawra,’ in Tripoli. (Credit: João Sousa/L’Orient Today)

Less than a month out from the second anniversary of the Oct. 17, 2019, uprising, the public squares that once buzzed with anger across the country have been plunged into darkness. While the socioeconomic situation is only worsening, opposition political forces have gradually moved away from demonstrations in favor of other, election-oriented strategies.

“Demonstrating was based on at least two fundamental assumptions: the fact that our right to hold peaceful protests would be protected by the system and that the political class would at some point respond to our demands. This was not the case,” explains Carmen Geha, a public administration professor.

During the last mass demonstration, on the first anniversary of the Aug. 4, 2020, Beirut port explosion, clashes between security forces and protesters left more than 80 people injured.

The security forces’ crackdown on protest movements have discouraged many Lebanese from taking to the streets, to the point that they were almost completely deserted during Parliament’s vote of confidence for Najib Mikati’s government on Sept. 20.

“The vote, whose outcome was certain, took place at the UNESCO Palace. The site was anything but favorable and would have put protesters at great risk,” says Mohammad Serhan, a member of the National Bloc opposition party.

During the confidence vote for former Prime Minister Hassan Diab’s government on Feb. 11, 2020, hundreds of demonstrators took up positions at various entrances to the Grand Serail, the premier’s headquarters, where security forces had deployed en masse. It had been four months since the start of the popular uprising against the ruling class.

“The only thing missing for a military parade was the presidential guard,” Sehran quips.

Since then, the country’s socioeconomic context has taken a turn for the worse.

“Lebanese are now preoccupied with securing their basic needs, which prevents them from taking to the streets. Today they are wondering what the thawra [“revolution”] has accomplished since its outbreak,” says Waddah Sadek, the head of the Khat Ahmar (“Red Line”) party.

According to a United Nations report released in early September, more than three-quarters of the population now lives below the poverty line.

“The Oct. 17 uprising has lost its momentum,” explains Karim al-Mufti, a political science professor and researcher.

The current situation — crippling fuel and diesel shortages, soaring inflation, drastic power cuts — is not conducive to protests, he says.

“It’s the zombie syndrome, meaning that people are completely lost and don’t know which way to turn. In this context, people no longer have time to demonstrate,” Mufti says.

Campaigns to discredit protesters have also dampened the mobilization.

“We have been accused of being agents working for embassies,” Sadek says, adding that Khat Ahmar decided to no longer participate in street protests in June 2020.

On the political scene

For its part, the Citizens in a State party of the economist and former Minister Charbel Nahas has always been selective in joining protests.

“Protests are one tool among many. It does not make sense to demand reforms from a political class that has been repressing us,” says Maya Hodroj, a party member.

For Citizens in a State, mobilization in the streets must be “carried out by a program based on not only slogans, but also leadership. As for the program, it must clearly lay out the party’s envisaged public policy, its costs and how it will be financed,” Hodroj says.

The absence of political movements in the streets does not necessarily mean the end of the 2019 uprising. While the major demonstrations that took place in the fall of 2019 have tapered off, the streets have not been completely ignored, instead now being used more for strategic purposes.

“We adapt to the situation. It is important to determine the added value of a demonstration in the street,” explains Karim Safieddine, a member of Mada, a network that brings together young people mainly via universities’ secular clubs but also recently in areas of Sur and Aley.

Protesters have also been supporting regular demonstrations by the families of the 2020 explosion’s victims.

On July 13, the victims’ relatives protested outside the home of former Interior Minister Mohamed Fehmi, accusing him of blocking the investigation into the blast.

In recent months, the opposition parties have also thrown their weight behind student elections as well as professional union and syndicate elections.

“Our work is continuous. We won the last student elections and those of the order of engineers. Our commitment is part of a bottom-up approach,” Nahida Khalil of Beirut Madinati (“Beirut My City”) explains, referring to a landslide victory won by a large coalition of opposition political parties in the Beirut Order of Engineers and Architects elections in June.

These wins allow the anti-establishment parties to gain a say in public policy.

“The strategy of mobilizing to win the professional union elections is a good one because it makes it possible to consolidate a certain counterpower,” Mufti says.

He adds, “These wins do not necessarily mean that this political capital will automatically turn into votes for average voters. Elections are won on political grounds, not on public policy.”

Almost all mainstream political parties are preparing for the parliamentary elections slated for the first half of 2022.

Meanwhile, some opposition groups are focusing their work on building political and electoral alliances ahead of the trade union elections scheduled for the coming months, as well as in anticipation of the parliamentary elections.

“At the moment, there are slight differences among the opposition groups on the issue of a civil state, the economic system and sovereignty. ... There are three main political groups within the opposition: the right wing, the center and the left wing,” Serhan says.

“Each of these groups may attract different voters, but they agree on the essential, i.e., opposition to the current political class,” he adds.

“Relying on clearing out [the entire political class] does not work, even with the decaying country and economy, because vacuum and instability raise concerns, and sectarian identities can easily be evoked to protect the interests of groups and sects,” Mufti says.

Mufti holds up the 2018 parliamentary elections, in which the opposition managed to win one seat, as an example to be modeled after.

“Kulluna Watani [“We Are the Nation”], a large alliance of 15 constituencies, ended up failing because of the idea that a united list and an alliance would be enough to draw in all ideologies and all Lebanese. But politics are the battle for representation. We must target constituencies that are in line with the values we carry and create a real political program based on project and not simply on slogans. The parliamentary elections require real field work,” he adds.

Many are wondering whether the upcoming elections can bring about change while the current political class knows all the tricks, and political patronage and clientelism have tended to dominate this kind of election.

“We know for a fact that we are probably going to have to wait a few more years before we can really change things through institutions,” Sadek admits.

But for the opposition parties, this does not prevent them from trying to get their foot in the door of power by engaging in battle today.

Less than a month out from the second anniversary of the Oct. 17, 2019, uprising, the public squares that once buzzed with anger across the country have been plunged into darkness. While the socioeconomic situation is only worsening, opposition political forces have gradually moved away from demonstrations in favor of other, election-oriented strategies.
“Demonstrating was based on at least...