Here’s what happened yesterday and what to expect today, Wednesday, July 7 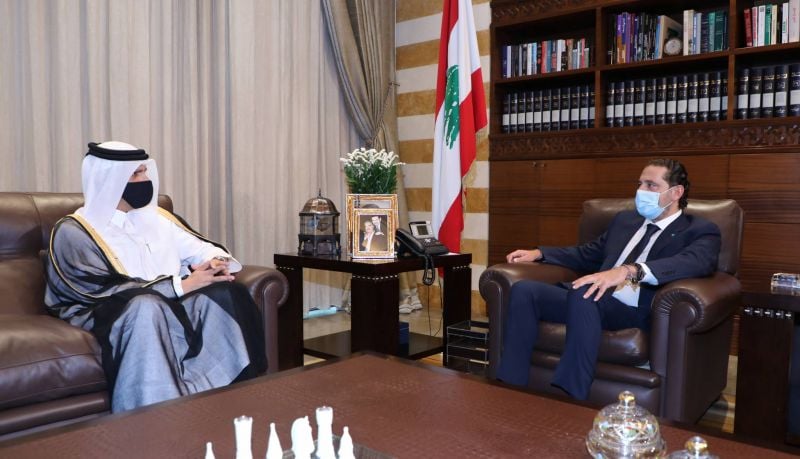 Premier-designate Saad Hariri met on Tuesday with the Qatari foreign affairs minister, who is in Lebanon in a bid to push officials to break the government formation deadlock. (Credit: Dalati & Nohra)

Qatar’s foreign minister is in town to try his hand at breaking Lebanon’s monthslong cabinet formation stalemate. Mohammed bin Abdulrahman Al-Thani arrived in Beirut on Tuesday evening and headed straight to a meeting with President Michel Aoun, telling him Qatar is ready to “resolve the crises that Lebanon is experiencing on all levels.” The minister also met with Parliament Speaker Nabih Berri as well as Prime Minister-designate Saad Hariri, who has sparred with Aoun over the next government’s makeup and is reportedly — more than nine months after taking on the task — moving closer to abandoning the effort. Qatar previously facilitated an agreement among Lebanese political parties that paved the way to a government’s formation, in 2008, ending 18 months of political crisis and violence. On Tuesday, Qatar also announced that it would provide more than 800 tons of food aid over the next year to the Lebanese Army, which like other state institutions has been languishing while the political crisis stretches on and the lira’s value plummets.

Hassan Diab appealed to the international community to rescue the country from the brink of a “social explosion.” The caretaker prime minister, who resigned following the Aug. 4 Beirut port explosion, told a conference of foreign ambassadors and diplomats that Lebanon has been facing its “dark fate” alone and that donors’ refusal to provide assistance until a new government is formed affects the lives of average Lebanese people instead of “the corrupt.” French Ambassador Anne Grillo was scathing in response to Diab’s plea, making clear that help from both France and elsewhere is on offer if Lebanon’s political leadership enacts reforms and slamming Lebanon’s collapse as “the deliberate result of poor management and inaction for years.”

A deadline expires today for the Health Ministry to provide pharmacy owners with a revised list of subsidized medications and avoid a strike. A pharmacy owners’ union said it would announce an open-ended strike if it did not receive a detailed list of products that would continue to be subsidized by the central bank at the official rate of LL1,507.5 to the US dollar and gain clarity about the future pricing of medications. It follows the central bank governor’s announcement on Monday that he would pay up to $400 million in invoices for imported products, including medication and wheat. Caretaker Health Minister Hamad Hassan said in a TV interview on Tuesday night that the ministry has agreed to cut pharmaceutical subsidies from $108 million to approximately $50 million a month and that priority will be given to medicines for chronic and rare conditions. Pharmacy shelves have been emptied out in recent months due to the Banque du Liban’s alleged failure to provide the funds for subsidized imports, prompting importers to refuse to sell their products before getting confirmation of payment by BDL. The strike, if it goes ahead, will be at least the third of its kind this year.

Lebanon recorded its highest number of new COVID-19 cases since May as the highly transmissible Delta variant continues to circulate. The Health Ministry registered 294 new cases in yesterday’s report — the steepest single-day count since May 28. The head of Beirut’s Rafik Hariri University Hospital, Firass Abiad, tweeted a warning about the “big jump” in cases, asking, “When will people learn from their previous experiences” and hinting at a lack of policy to contain the virus’ spread. The head of Parliament’s Health Committee, Assem Araji, called for people to continue wearing masks and socially distancing, because with “a dilapidated medical sector … we cannot face the [Delta] variant.”

Broken cranes at the Beirut port are causing severe congestion at sea and delaying cargo deliveries. The International Chamber of Navigation in Beirut said that due to nonoperational cranes, ships are being forced to wait for long periods of time off the docks before gaining access to unload their cargo. The chamber went on to warn that if more cranes go down, “food security will be in danger.” The chamber says it has been unable to repair cranes and other equipment because of difficulties transferring funds abroad to purchase spare parts from foreign suppliers.

The syndicate of gas station owners is holding a press conference at noon today to discuss the ongoing fuel crisis. Despite a partial ending of fuel subsidies that were meant to alleviate pressure on gas stations and repeated promises from importers and the government that deliveries would arrive to ease shortages, the now-familiar sight of dozens of vehicles queuing for gas has not disappeared and is unlikely to anytime soon.

Want to get the Morning Brief by email? Click here to sign up.Qatar’s foreign minister is in town to try his hand at breaking Lebanon’s monthslong cabinet formation stalemate. Mohammed bin Abdulrahman Al-Thani arrived in Beirut on Tuesday evening and headed straight to a meeting with President Michel Aoun, telling him Qatar is ready to “resolve the crises that Lebanon is experiencing on...

Who are Ashrafieh’s 'Soldiers of God'?