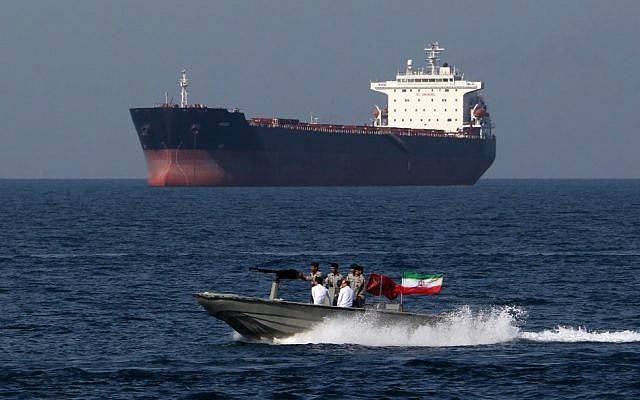 An Iranian boat passes a tanker in the Strait of Hormouz. (Credit: AFP)

“If the state does not have what it takes, we will negotiate the purchase of fuel from Tehran,” Hezbollah Secretary-General Hassan Nasrallah said on June 8.

As Lebanon grappled with its ongoing severe fuel crisis, Nasrallah took the opportunity to invite Beirut to turn eastward and import fuel needed to generate power from Iran, which he said could be paid for in Lebanese lira.

Any business deal with Iran comes with the threat of US sanctions, which makes the plan unrealistic in the current context.

Nasrallah’s remarks were not without ulterior motives. Hezbollah’s secretary-general “was very serious when he brought up the subject,” a source close to the party told L’Orient-Le Jour.

The source said he believes that the economic crisis plaguing Lebanon is the consequence of America’s desire to pressure Lebanon to yield to US demands. “Why would we be afraid of US sanctions when the country is already under siege?” he added.

Hezbollah is betting on the revival of the nuclear deal between the US and Iran before moving to develop relations between Beirut and Tehran.

The party’s desire to push Lebanon eastward is one of its fundamental aspirations and corresponds with the vision it has had since its creation in the aftermath of the Iranian Revolution, which in 1979 established Iran as an Islamic republic. The revolution advocates for confronting the West and fighting its model.

The Iranian project is not only based on religious ideology or military power but also on the creation of loyal cells within various communities in many countries.

Amid Lebanon’s economic and financial collapse, Hezbollah believes the time is ripe for the country to turn eastward or, failing that, to rely on Iran in many sectors, including oil and gas, medicine and other areas of cooperation.

The aim is to completely gravitate toward the Iranian axis, on condition that this axis does not falter and remains in place. Thus, the importance of the nuclear deal.

‘Tehran is trying to reach the Mediterranean’

On June 26, the Iranian Embassy in Beirut announced the “arrival of Iranian tankers” in Lebanon — a statement that did not go unnoticed.

Although the General Directorate of Petroleum within the Energy Ministry claimed that it had not received any request to authorize oil imports from Iran, the embassy’s message, with a photo of an Iranian tanker, made noise, especially after Nasrallah’s remarks.

Iran is already preparing for signing the new nuclear deal and what will come after it. “Tehran is trying to reach the Mediterranean,” a politician opposed to Hezbollah said.

Tehran previously attempted to establish itself in the Mediterranean via Syria by trying to manage the port of Latakia. But the Russians vetoed this move, considering that part of Syria exclusively under their authority.

Iran might also have something else in mind for wanting to export its oil to Lebanon. In the 1960s, oil refineries had been installed next to the pipelines in Zahrani in the south and Tripoli’s Beddawi in the north.

During the 1975–90 Civil War, these refining stations either broke down or were damaged. They remain idle today.

“In 2010, Tehran proposed to the Lebanese government a project to rehabilitate the refineries, but Lebanon refused. In 2016, after signing the nuclear deal, Iran reiterated its offer, but to no avail,” the anti-Hezbollah source said.

However, according to a Hezbollah official, “All this talk is pointless. It’s not Iran but the West that wants to get its hands on the port of Beirut.”

In his speech on June 25, Nasrallah said that some [foreign] companies were ready to come to Lebanon to promote the establishment of power plants.

During a meeting with the energy and public works ministers, the delegation presented an offer to rebuild the port of Beirut and expand that of Tripoli.

“This visit is one of the main spinoffs of Hezbollah’s visit to Russia to lay the ground for cooperation, but Russia insists on dealing with the Lebanese state,” the Hezbollah official said.

Back in May, a party delegation visited Russia to discuss the Syrian issue.

“Moscow is ready to play a role in Lebanon, provided that the Lebanese state and the political forces endorse it,” a Russian diplomat told L’Orient-Le Jour.

Russia has expressed its willingness to facilitate the maritime border demarcation process between Lebanon and Syria, as well as the exploitation of blocks 1 and 2 in Lebanon’s northern coastal waters, in a bid to put an end to the dispute between Beirut and Damascus.

An agreement was signed between Russia’s Kapital Company and the Syrian government for the exploration and exploitation of the Syrian block 1 and its oil fields in the eastern Mediterranean, The agreement gives the Syrian authorities access to an area that Lebanon considers to be part of its Exclusive Economic Zone.

In 2019, Lebanon signed a 20-year contract with Russia’s semi-public oil company Rosneft for the rehabilitation, expansion and operation of fuel tanks in Tripoli, following a call for tenders launched in May 2017 that Moscow won.

Russia is thus consolidating its position in Lebanon thanks to its tight control over Tartus and Latakia in Syria.

“Hezbollah obviously prefers the Russian presence to that of the Americans in the country,” the source close to the party said.

“If the state does not have what it takes, we will negotiate the purchase of fuel from Tehran,” Hezbollah Secretary-General Hassan Nasrallah said on June 8.As Lebanon grappled with its ongoing severe fuel crisis, Nasrallah took the opportunity to invite Beirut to turn eastward and import fuel needed to generate power from Iran, which he said could be paid for in Lebanese lira.Any business...