Hariri’s return sets the cabinet formation wheels back in motion

On Monday evening, Gebran Bassil met with Hezbollah heavyweights Wafiq Safa and Hussein al-Khalil, and Ali Hassan Khalil of Nabih Berri’s Amal Movement, to discuss the cabinet formation. Meanwhile, upon his return to Beirut, Saad Hariri was immediately received by Berri in his Ain al-Tineh residence. 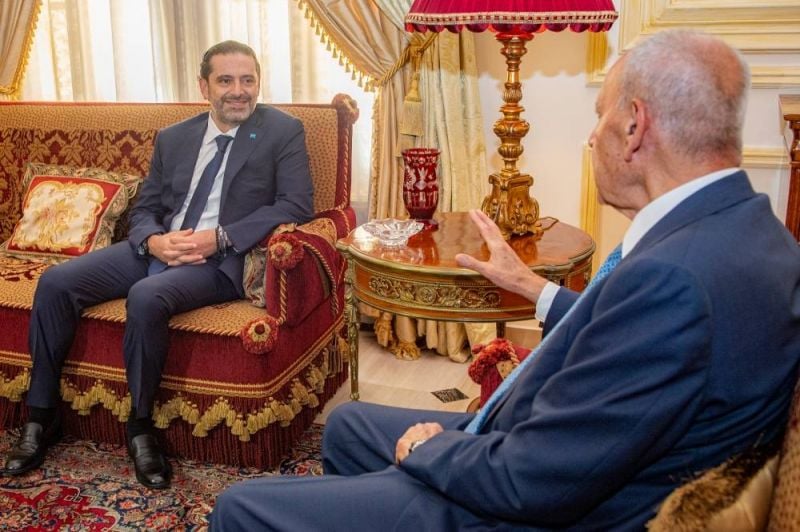 The meeting had been much anticipated for several days, during which time no serious discussions were held to make a breakthrough in the cabinet formation process.

With Hariri’s return, things appear to be set back in motion, but it remains too early to talk of a positive outcome as several challenges lie ahead.

Following the parliamentary session held on May 22 to discuss an official letter sent by President Michel Aoun to Berri in which the head of state called for speeding up the cabinet formation process, Hariri was quick to fly back to the United Arab Emirates — something that angered Berri and suspended his reported attempt to mediate the standoff between the premier-designate and the head of state.

However, during yesterday’s meeting, which lasted nearly two hours, the two men appeared to have turned the page on this slight disagreement.

L’Orient-Le Jour previously reported that during the last parliamentary session, the MPs appeared to symbolically renew their support of Hariri to form the government, and the legislature head was very clear with the premier-designate on this issue.

Berri reportedly told Hariri that the country can no longer tolerate any procrastination in resolving the current political paralysis, a clear jab at his political and personal dispute with Aoun, which prevents the two men from agreeing on the future cabinet lineup.

The legislature head reportedly gave Hariri “a few hours” to decide whether or not he wanted to form a government in accordance with his initiative.

Backed by the Maronite Patriarch Bechara al-Rai and Hezbollah Secretary-General Hassan Nasrallah, Berri has insisted on the need to agree on a cabinet lineup of 24 ministers, with no political party retaining a “blocking third” — effective veto power — in the future government.

Berri and Hariri also reportedly tackled the thorny issue of the two Christian ministers who would take up the interior and justice portfolios — a serious bone of contention between the premier-designate and the president.

The two men also crossed swords on which party should appoint the last two Christian ministers in a cabinet of 24 ministers equally divided between Christians and Muslims.

In this lineup, the 12 Christian ministers will, in principle, be distributed as follows: seven from the president’s camp — including one belonging to the Tashnag party — two from Sleiman Frangieh’s Marada Movement and one from the Syrian Social Nationalist Party, an ally of Hezbollah.

So, the pertinent question is: who should appoint the two remaining Christian ministers?

While Aoun insists that Christians must name Christian ministers, especially since the two most influential Christian parties, i.e., Gebran Bassil’s Free Patriotic Movement and Samir Geagea’s Lebanese Forces, are supposedly not represented in the cabinet lineup, Hariri maintains that as per the constitution, the premier-designate is entrusted with the task of forming the government in consultation with the head of state.

The Future Movement head seeks also to obstruct any attempt by the presidential camp to retain, even implicitly, a blocking third in the next cabinet.

If Aoun gets to choose the two Christian ministers, the president’s camp in the cabinet lineup would be represented by a total of 10 ministers, counting a representative of Talal Arslan, Aoun’s Druze ally.

The head of state wants to avoid granting Hariri and his allies an absolute majority in the future government, because if Hariri ends up choosing the two Christian ministers, he will have 13 ministers in a cabinet of 24, including a Druze minister from Walid Joumblatt’s Progressive Socialist Party, three representatives of Berri, and one of the Marada Movement.

In an attempt to resolve this problem, Hariri and Berri reportedly discussed a solution under which Aoun, Hariri, Berri and Maronite Patriarch Bechara al-Rai would reach a mutual agreement on the names of the two future ministers.

The other scenario is that Aoun and Hariri alone agree upon the [two] potential ministers’ names, and vow that they will not include them in their respective quotas.

The outcome of Hariri and Berri’s lengthy meeting was at the core of another meeting held at Bassil’s residence late in the evening. The meeting involved Berri’s right-hand man Ali Hassan Khalil; the political assistant of Hezbollah Secretary-General Hassan Nasrallah, Hussein Khalil; Hezbollah top official Wafiq Safa; and Bassil. After the meeting, the FPM website reported that there were still some hurdles hindering the formation of a government, adding that talks would reconvene.

Hariri will remain in his post, former prime ministers say

In the wait for tangible results, Hariri’s circles have expressed cautious optimism about the next phase. Speaking to L'Orient-Le Jour, Mustapha Allouche, vice president of the Future Movement said, “The meeting in itself is a positive step, as it would mean that Berri’s initiative is back on track. However, the fact that Hariri has not made any media statement shows that nothing has been decided yet.”

“But, will Aoun consent to the idea that neither side has a blocking third in the government,” Allouche asked. He added that Hariri must prepare a draft cabinet lineup soon.

It could be an amended version of the cabinet lineup of 18 ministers that Hariri had submitted to Aoun during the last meeting they had in March. It could also be a completely new lineup. Both Hariri’s circles and former Sunni prime ministers accused Aoun and Bassil of hindering the formation of a government. That accusation followed the meeting Hariri had on Monday with former prime ministers Najib Mikati, Fuad Siniora and Tammam Salam at his Beit al-Wasat residence. The meeting provided an opportunity for the participants to discuss developments related to the government formation process, including the meeting in Ain al-Tineh.

“Saad Hariri is determined to successfully fulfill his mission. A position that Berri and the former prime ministers back,” Siniora told l’Orient Le-Jour. That would mean that it is unlikely that Hariri will recuse himself for the time being.

Siniora added, “Abiding by the constitution is what matters the most to us. We are against any violation attempt thereof.” Aoun has been accused by Hariri’s circles of “encroaching on the powers of the prime minister,” for claiming the right to have a say on the names of potential Christian ministers.

He affirmed that Baabda is in favor of a cabinet lineup of 24 ministers with no blocking third privilege. However, some hurdles are yet to be resolved, he added.

L’Orient-Le Jour’s Baabda correspondent, Hoda Chedid, reported that all parties are dealing with Berri’s initiative as the last chance to form a consensus government. Otherwise, all protagonists will be left to the inevitable: the formation of a government limited in its tasks to preparation for legislative elections scheduled for next year.

This article was originally published in French. Translation by Sahar Ghoussoub and Joelle El Khoury.

Prime Minister-designate Saad Hariri returned to Beirut on Monday. Later that day, he met with Parliament Speaker Nabih Berri in Ain al-Tineh to discuss the government formation process.The meeting had been much anticipated for several days, during which time no serious discussions were held to make a breakthrough in the cabinet formation process.With Hariri’s return, things appear to be set...

Gas shortages to ease, call for UN probe into port blast, Captagon bust: Everything you need to know today

For Hariri, resigning is once again on the table