With the outcome of Syria’s presidential election in little doubt, hundreds of Syrians in Lebanon turn out to vote amid allegations of coercion 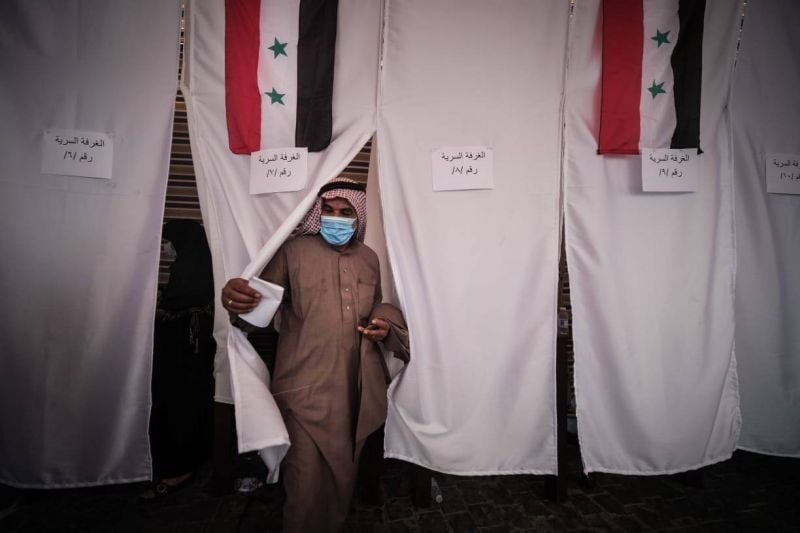 Hundreds of Syrian refugees turned out to the Syrian Embassy in Lebanon to cast their vote in this year's presidential election. (Credit: João Sousa/L’Orient Today)

BAABDA — Hundreds of Syrians lined up outside the Syrian Embassy in Baabda on Thursday morning — some having trudged up the highway on foot, others having arrived in buses, many clutching posters of Bashar al-Assad — to cast their vote in a presidential election whose outcome is not much in doubt.

Voters were bused in by the embassy from far-flung areas of northern Lebanon and the Bekaa Valley, including Hermel and Baalbeck, where most refugee settlements are concentrated.

Meanwhile, a handful of attacks on convoys by Lebanese anti-Assad groups left at least seven Syrians wounded before security forces intervened, according to initial reports.

While the election within Syria will take place next Wednesday, voting in embassies for Syrians outside the country was held on Thursday. The Syrian Embassy in Lebanon posted a statement urging Syrians in the country to vote “to confirm belonging to the dear homeland, and to participate in building a renewed Syria, whose future will be decided by Syrians alone and no one else.”

In the last presidential election, in 2014, current President Assad won with 88.7 percent of the vote against two relatively unknown challengers. This year, Assad is up against two low-profile candidates: Abdullah Salloum Abdullah, a former deputy cabinet minister; and Mahmoud Ahmad Marei, the head of a small, officially tolerated opposition party.

The outcome is equally assured this time around. 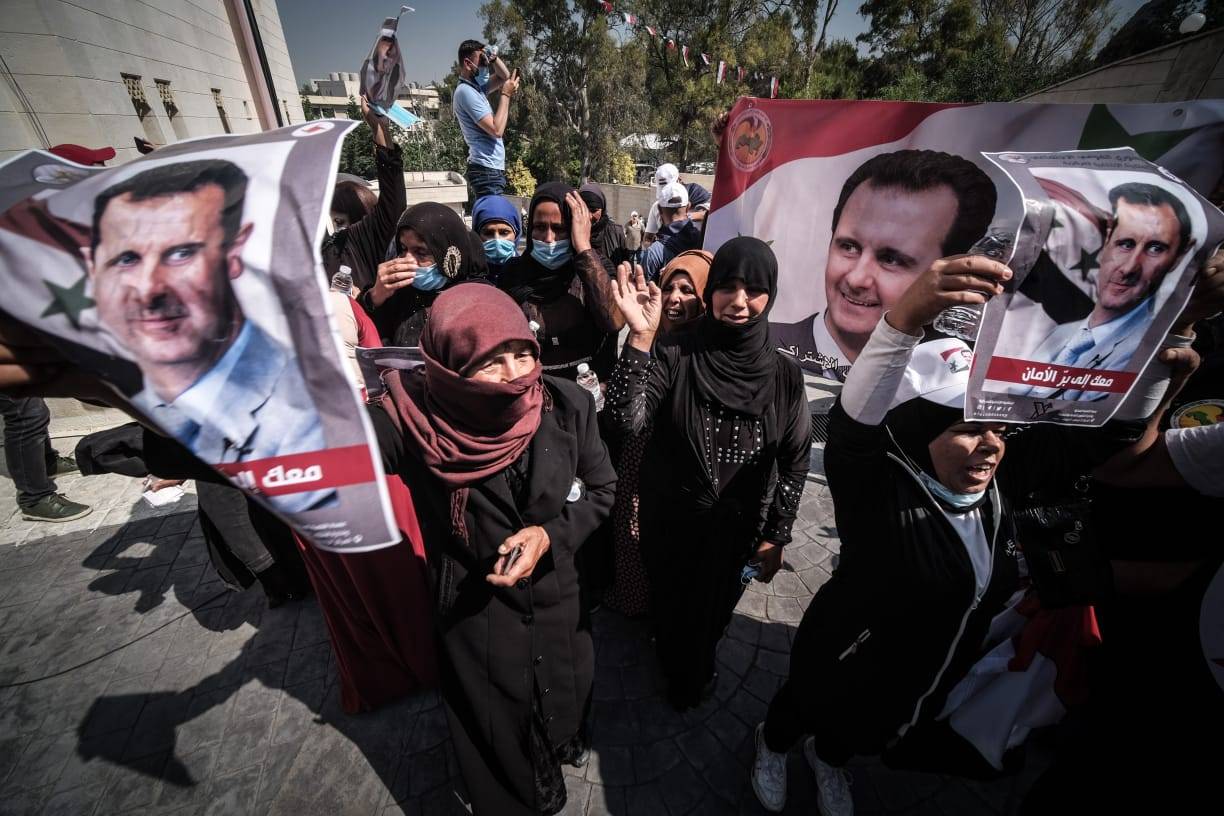 Hundreds of voters were bussed to the Syrian Embassy in Baabda from far-flung areas in Lebanon's north and Bekaa Valley regions. (Credit: João Sousa/L’Orient Today)

A Syrian refugee living in Hermel, who is originally from Raqqa and lived there until her home was destroyed, told L’Orient Today that she and her children are voting for Assad, expressing her willingness to return once “stability and security are implemented.”

Another voter, currently residing in southern Lebanon, praised Hezbollah for its efforts in the war, saying the fighters dispatched into the country to shore up Assad’s forces had helped the Syrian Army protect Damascus.

“We’re with you until the end, President Assad,” he said.

None of the voters whom L’Orient Today spoke with said they planned to cast a vote for an opposition candidate.

However, Syrians opposed to Assad and human rights groups have alleged that refugees were pressured or threatened to participate.

The Access Center for Human Rights, which monitors conditions for Syrians in Lebanon, said in a statement that it has received reports of “direct threats against civil society activists and camp superintendents, to have them pressure refugees in their surroundings to register their names as voters with the Syrian embassy in Beirut, through offices established by … Lebanese political parties” and groups aligned with Assad’s government.

The group also said it had documented three cases of Syrian refugees being abducted and “severely beaten by Lebanese political parties for refusing to register names of people in their surroundings on the voters’ list.”

While Lebanese parties close to the regime allegedly helped to round up Syrians to vote, officials on the opposite side of the political spectrum seized the opportunity to renew their call for refugees to return home.

Samir Geagea, the leader of the Lebanese Forces, said in a statement on Wednesday that Syrians who voted for Assad in the election should be stripped of refugee status.

“The definition of the displaced is clear and internationally recognized, and it is the person who left his country for force majeure and security dangers that prevent him from remaining in it,” he said.

He called for Lebanese authorities “to obtain complete lists of the names of those who will vote for Assad tomorrow and to ask them to leave Lebanon immediately and join the areas controlled by the Assad regime in Syria, since they vote for this regime and it does not pose a threat to them.”

A message circulated on social media by a group in Tripoli called on Lebanese citizens to take matters into their own hands.

“What is required tomorrow from every upstanding Lebanese person who knows that he has a Syrian worker or a Syrian tenant who participated in the polls for the serial killer Bashar al-Assad is to expel him from his work or from his residence — him and his family — without mercy and without pity.”

As Syrians traveled to Baabda to cast their vote on Thursday morning, scuffles broke out in a number of areas, including Nahr al-Kalb and Zouk, with Lebanese men seen attacking convoys of voters who were carrying posters and chanting in support of Assad. Initial reports suggested that at least seven Syrians had been wounded in the attacks, although the extent of their injuries was unknown at the time of publication.

But while hundreds of refugees turned out to vote at the embassy on Thursday, not all the Syrians in the country will be casting a ballot.

Mohamad Dheiby, a Lebanese community activist in the northern Minyeh area, told L’Orient Today that many of the buses sent to pick up local Syrian refugees had headed back to Beirut nearly empty, despite a get-out-the-vote campaign by Assad loyalists and their supporters in Lebanon.

A Syrian opposition activist living in Beirut, who asked that his name be withheld for safety reasons, told L’Orient Today that he would not vote.

“It’s just a play — we already know the result,” he said.

He said many Syrians living in settlements throughout the country would likely vote out of fear that if they did not, they would be reported to the regime or pro-regime parties by intelligence agents and would face retaliation — even if no one had explicitly threatened them.

“Of course there are supporters of the regime even in the camps,” he said. “And that’s their right — to go and vote whatever their idea is — but the higher number of people voting are going out of fear.” 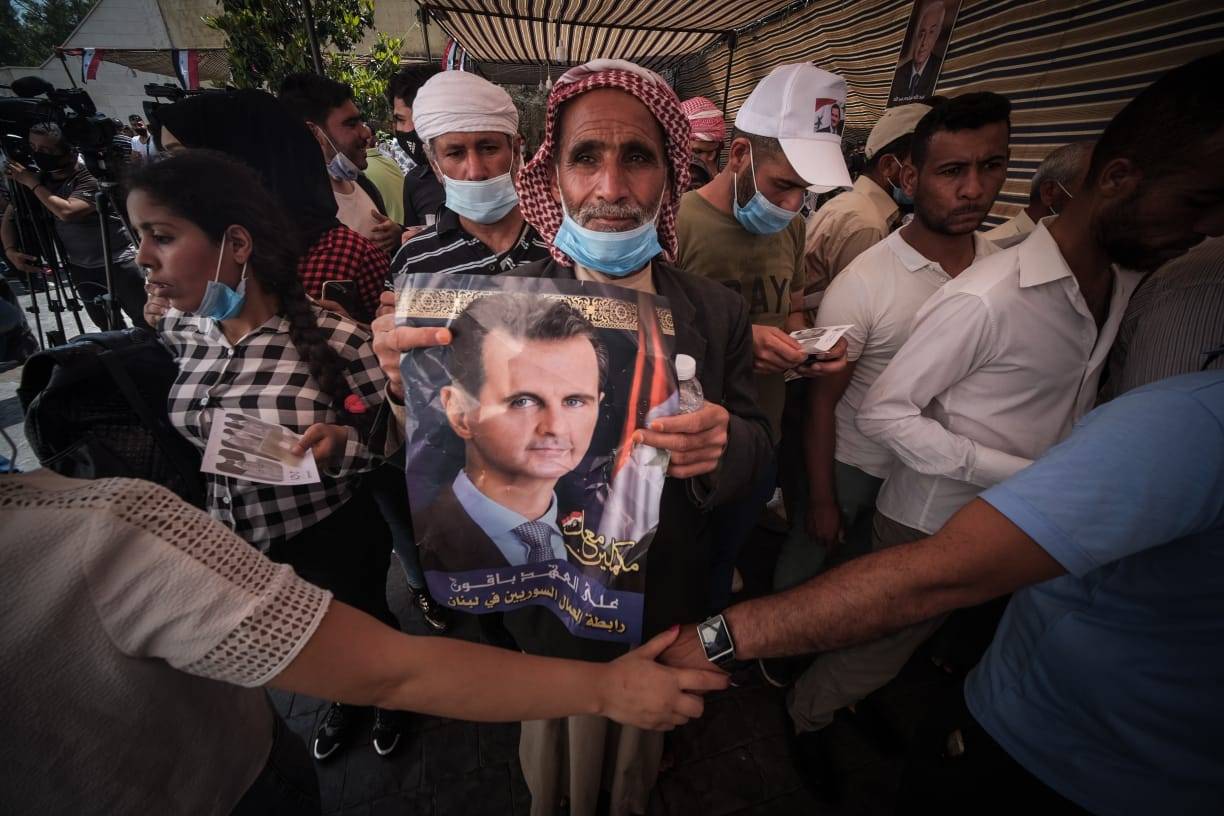 Opposition activists in Lebanon have raised concerns of coercion of Syrian voters by Assad loyalists and their supporters in Lebanon. (Credit: João Sousa/L’Orient Today)

“The Syrian refugees in Lebanon have the most unstable and insecure conditions among all host countries, especially with the strong grip of Hezbollah on the country. Therefore, some Syrians in Lebanon fear backlash, or deportation, if they did not present and vote, which has become an existential issue for them,” Haya Atassi, a spokesperson for the Syrian Association for Citizen's Dignity, a Syrian-run civil rights group, said in a statement.

“The Syrians in Lebanon should be protected not only from forced return, but also from forced voting,” Atassi added.

The Syrian activist added that he was afraid the spectacle of large numbers of refugees flocking to the embassy to vote would be used not only within Lebanon but in European countries that have given Syrians asylum to make an argument that they can now safely return.

“But what are the measurements of ‘safe’?” he asked. “If the house is still there and I can go to it but then the mukhabarat [secret police] can come and jail me or kill me ... that’s not safe.”

BAABDA — Hundreds of Syrians lined up outside the Syrian Embassy in Baabda on Thursday morning — some having trudged up the highway on foot, others having arrived in buses, many clutching posters of Bashar al-Assad — to cast their vote in a presidential election whose outcome is not much in doubt.Voters were bused in by the embassy from far-flung areas of northern Lebanon and the Bekaa...