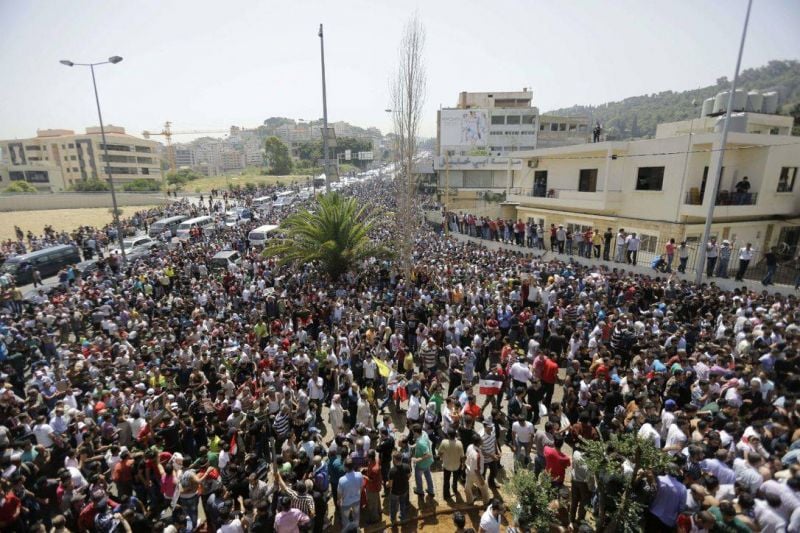 Voters show up to cast ballots at the Syrian Embassy in Lebanon during the last presidential election in 2014, won handily by Bashar al-Assad. (Credit: Joseph Eid/AFP)

MINYEH — With Syria’s presidential election on the horizon in less than a month, a political apparatus has kicked into gear in Lebanon to push the hundreds of thousands of Syrian refugees in the country who are eligible to vote to the ballot box.

While the presidential election inside Syria is set to take place May 26, Syrians living outside the country will vote in embassies May 20.

Since the election date was announced, Syrian organizations aligned with the government of Bashar al-Assad and pro-Assad Lebanese political parties and individuals have been making the rounds to cajole and — according to some — threaten Syrians into registering their names on voter lists and going to the polls.

The Association of Syrian Workers in Lebanon, a pro-Assad group that works in coordination with the Syrian Embassy, issued a statement urging Syrians in the country to vote in the election, which it called an “important milestone in the contemporary history of Syria, which is victorious over terrorism, siege and sanctions.”

The association’s head, Mustapha Mansour, told L’Orient Today that groups of volunteers with the organization are making a push to register the names of Syrians committed to voting.

“We are holding meetings, whether in the municipality or in a center or a restaurant,” he said. “We gather the Syrians, they come and we explain to them about the elections and what they have to do.” But, he added quickly, “We don’t tell them who to vote for.”

While technically any Syrian citizen over the age of 18 should be able to vote without registering in advance, Mansour said the group is compiling lists of names and phone numbers so it can arrange transportation to the embassy in Baabda for those who need it.

The push is taking place not only in areas under the influence of pro-Syrian regime parties, but also in areas typically seen as bastions of opposition. Mansour noted that there have been several meetings in different areas of Akkar and one is scheduled in Tripoli on Saturday, where he said he expects more than 1,000 people to attend.

Two Syrian refugees living in the Minyeh area north of Tripoli, both of whom asked that their names not be published out of fear of retaliation, told L’Orient Today that the Syrians in the area had been called to a meeting held by Mansour’s group last week at the office of Mohamad Matar, a Lebanese real estate businessman close to the Baath party.

One of the Syrians said that many of the refugees who showed up were initially unaware of the actual topic of the gathering. The day before the event, he said, a man had pulled up in a Mercedes and told him to let the Syrians in the area know that there was a meeting with the United Nations the next day where aid would be distributed.

When he arrived at Matar’s office the following day, he said, he found some 500 people waiting outside. But upon learning that the topic was the Syrian election, he said, “80 percent of the people left and didn’t attend the meeting,” including himself.

The second Syrian said that both before and after the meeting, men had made the rounds of camps in the area and had warned the “shawishes,” or camp leaders, that their communities might be targeted by gangs if they did not help to turn residents out to the meeting and to the election itself.

The threats resonated because refugees in Minyeh had recently been the target of violence. In December, after a dispute between a group of Lebanese residents and residents of a refugee camp in the town of Bhanin, a group of Lebanese men set fire to the camp, forcing some 400 people to flee for their lives and burning their makeshift homes to the ground.

Although most of the Syrians in the area are opposed to Assad, the Syrian said, “people are afraid now that if they don’t take part in the elections, there will be problems in the camps and maybe they’ll be kicked out of the camps, because this is how they threatened the people — that either you take part or things won’t go well with you.”

Reached by L’Orient Today via WhatsApp, Matar said he was “busy” and declined to be interviewed about the meeting.

Mansour, for his part, denied that any pressure was being placed on the Syrians to take part in the election or to vote for Assad.

While maintaining that most Syrians support Assad, Mansour insisted opponents have nothing to fear if they go to the polls. “We also have other candidates and we will put up their pictures, and whoever wants to vote for them is welcome.”

Apart from the meetings being convened by Mansour’s association, a representative of the Access Center for Human Rights, a local human rights monitoring group, told L’Orient Today there have been reports from multiple areas of the country that members of Lebanese political parties aligned with Assad had come to Syrians’ homes and pressured them to register their names on voter lists.

In Baalbeck’s Al-Qaa area, the center said in a statement, camp leaders had reportedly been making the rounds to register residents and threatened them with repercussions from an intelligence agency if they refused. “However, one individual stated that he contacted the intelligence agency himself and they stated they have no knowledge of this,” the statement added.

But the election is particularly sensitive in Minyeh, where Lebanese residents opposed to Assad have already accused the Syrians in the area of being aligned with the regime.

After the destruction of the camp in Bhanin, amid an outpouring of aid from local and international NGOs, a delegation from the Syrian Embassy also visited the area and gave cash assistance to some of the displaced families. The Access Center said that some of the refugees who received aid at the time had since been pressured to register to vote.

The Syrians from Minyeh who spoke about the meeting held there said the embassy visit had stoked tensions between Lebanese and Syrian residents in the area, and that they fear the issue of the elections will now be used to drive a further wedge between them.

“Of course this matter is going to reflect negatively on the Syrians, because there will be a lot of talk among the people of Minyeh that ‘you Syrians are with the regime, so you’re not refugees and you need to leave,’” one of the men said.

“The Syrians living in the camps, I expect 90 percent of them will vote, because they are under pressure,” the other Syrian said. “The Syrians who are outside of camps and living in rented houses are not afraid of the pressure that, for instance, I will be burned while I’m sleeping in my tent, so these ones will not vote.”

The symbolic value of the refugee vote

Despite the fact that some 51 candidates have thrown their names in the hat for the Syrian election, Assad’s victory is widely believed to be a foregone conclusion.

Nevertheless, Aron Lund, a Syria specialist at the Swedish Defense Research Agency, said that turnout matters to Syrian authorities because a large turnout would be seen as “visible evidence of Assad’s power even after all these years of war.”

During the last Syrian election in 2014, which Assad won with a reported 88.7 percent of the vote, throngs of voters crammed into the streets around the embassy in Lebanon on election day.

Because a large number of foreign diplomats and journalists are present in Lebanon, Lund noted, such spectacles here are more visible than inside Syria. The visuals of large crowds of refugees gathering to vote at the embassy in 2014 were valuable for the Syrian government because it “showed that Assad retained a measure of genuine support and, more importantly, that many Syrians still felt the conflict was undecided and were not willing or able to cut ties with authorities back home,” Lund said.

Beyond that, Lund said the election optics could inform future discussions around refugee returns.

“If Syrians in the diaspora can be made to vote in large numbers, the government will use that to market itself as a necessary and credible partner in organizing refugee returns,” he said.

In fact, Mansour’s association has already been working on the returns; the group was helping to sign people up for the “voluntary return” trips organized by Lebanon’s General Security before the COVID-19 pandemic put a stop to them, Mansour said. Now he is hoping that the Syrian election will be a step toward convincing the international community to lift sanctions and fund reconstruction in the country.

“If there were reconstruction, you would see more people going back,” he said.

MINYEH — With Syria’s presidential election on the horizon in less than a month, a political apparatus has kicked into gear in Lebanon to push the hundreds of thousands of Syrian refugees in the country who are eligible to vote to the ballot box.While the presidential election inside Syria is set to take place May 26, Syrians living outside the country will vote in embassies May 20.Since the...