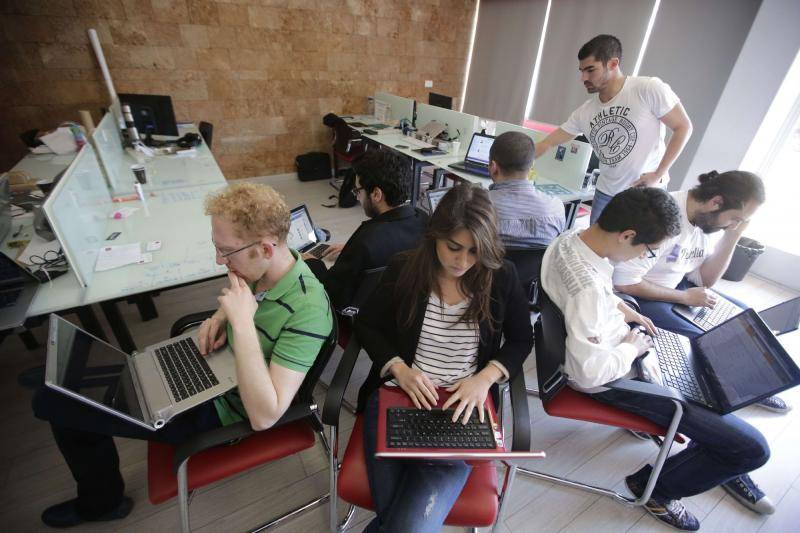 Although entrepreneurial creativity continues to blossom in Lebanon, when it comes to monetization, locals startups are increasingly setting their sights abroad. (Credit: AFP)

BEIRUT — Amid a brain drain catalyzed by Lebanon’s worst economic crisis in decades, young entrepreneurs are joining doctors, academics and other professionals who are shifting their sights for a more stable future from Lebanon to the Gulf, Europe and beyond.

Since the economic crisis began accelerating in late 2019, new Lebanese enterprises are increasingly confronting a weakening market and a dearth of governmental support.

Circular 331 from Banque du Liban, a $400 million initiative introduced in 2013 that once benefited dozens of businesses by providing financial support for viable applicants wanting to kick off an enterprise in Lebanon, has been frozen. Initiatives by aid organizations and foreign governments have stepped in to fill the void, but only for a sliver of fledgling companies.

In the end, the magnitude of the crisis — and the unpredictability of its course — has proved too large an obstacle for budding entrepreneurs to overcome.

If at any point the situation in Lebanon had stabilized since 2019, “we wouldn't have had to expand abroad or at least not as soon as we did,” says Neda Moujaes, who helms marketing and communications for the mobile application Jini, an app that connects users with handymen and other home service providers.

Moujaes, along with two other young Lebanese entrepreneurs, Samer Anid and Karl Ingea, had experienced success since launching Jini in 2017.

Even as the economic crisis deepened in the wake of the 2019 mass protests against the ruling elite, COVID-19 cases skyrocketed and the country reeled following the 2020 Beirut port explosion, the three young entrepreneurs didn’t immediately shift their sights abroad, instead looking to how they could fill emerging local market needs.

“When the Beirut port explosion happened, we collaborated with NGOs to offer free cleaning and maintenance services, and this led to wide brand exposure,” Moujaes told L’Orient Today. “During the pandemic we provided disinfecting services, which were in high demand and profitable.”

But as the lira’s value against the dollar plummeted — losing more than 85 percent of its worth — the prices of maintenance tools and cleaning products have spiked. Many of them are not manufactured locally and therefore must be purchased using “fresh” dollars, or US dollars that fall outside informal capital controls meant to staunch the hemorrhaging of foreign currency from the country.

Jini’s users were forced to pay double the amount for services that used to be affordable.

“We shifted to France because we saw a huge opportunity in the market,” Anid told L’Orient Today. The French market, he said, has demand for home services among a defined base — expats, students, households with working parents and the Lebanese diaspora in Paris.

“The [French] government gives loans for entrepreneurs to launch their startups. The market encourages innovation and the creation of employment for local residents, which pushes startups to settle in this city,” Anid said.

“Even in our heyday, we always encouraged startups to build products to export regionally and globally. So that applies today even more,” says Farah Chamas, a program manager at Nucleus Ventures, a flagship seed program backing Lebanese entrepreneurs through a mix of local and international support.

And now, given the local market’s unpredictability and Lebanon’s dollar crunch, a number of startups are focusing more and more on securing clients from the Gulf and Western countries, Chamas said.

Stefano Fallaha, the CEO of Podeo, a podcasting company with an extensive library of Arabic-language content, chose to start his company in the United States due to less red tape and greater funding opportunities. Podeo’s sponsors and advertisers include Pepsi and the FIFA World Cup.

He said that since 2019, securing such sponsorships in Lebanon has been unlikely, other than from small local brands. “But this was not the case two years ago.”

The resources available in the international market have fueled Podeo’s growth. “We have expanded the team from four members last year to 20 this year, and we are continuously hiring across the region,” Fallaha said.

Another issue confronted by burgeoning businesses is a lack of mentorship. Makram Osman, who led a team that pioneered technology that connected users to nearby supermarkets, noted a lack of successful predecessors off of which to model his business, Floki. The startup quickly lost interest in the Lebanese market when the economic crisis began, instead venturing into countries around the region with the app.

But despite the lack of resources and guidance, Lebanon is not experiencing a decrease in creativity.

“With all the challenges faced, very few and almost none of the startups we work with have decided to quit working on their ideas and ventures,” Chamas said.

Lara Kloumian, an innovation analyst, also said she has not recorded a decrease in applicants wanting to venture into the startup world, but rather that areas of interest are shifting.

“Lebanese were hesitant in [their endeavors] into the e-commerce sector, but today the focus has shifted there, and innovators have been riding this wave ever since the COVID-19 pandemic turned businesses online,” Kloumian said.

“Lebanon is not a market for monetization, but it is a creative talent hub,” Fallaha said.

BEIRUT — Amid a brain drain catalyzed by Lebanon’s worst economic crisis in decades, young entrepreneurs are joining doctors, academics and other professionals who are shifting their sights for a more stable future from Lebanon to the Gulf, Europe and beyond.Since the economic crisis began accelerating in late 2019, new Lebanese enterprises are increasingly confronting a weakening market and...