Maritime border talks, dead fish cleanup, Le Drian due in town: Everything you need to know this Tuesday

Here’s what happened over the weekend and what to expect today, Tuesday, May 4, and this week 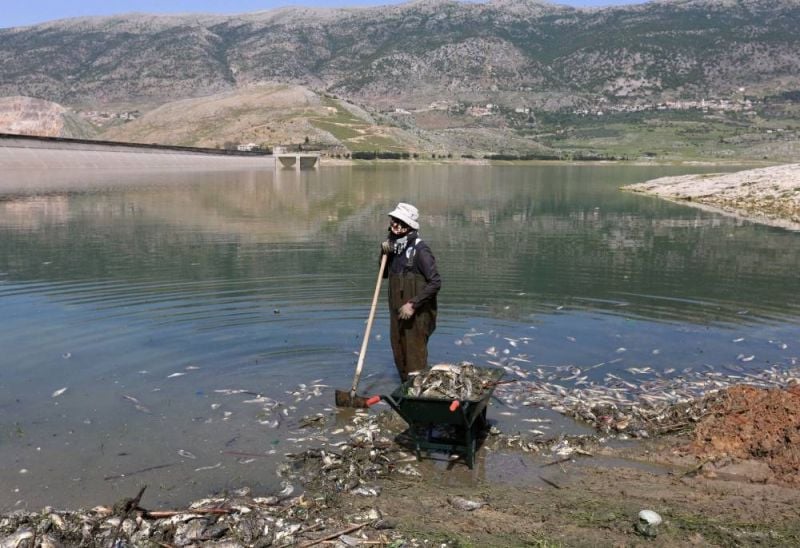 A volunteer cleans up dead fish that have washed up on the banks of Lake Qaraoun on the Litani River. (Credit: Aziz Taher/Reuters)

Lebanon and Israel are set to resume US-mediated talks on demarcating their maritime borders today. Talks were originally launched in October, but stalled in November after both sides presented contrasting maps for the proposed border line that would divide currently disputed territorial waters. A correspondent for our sister publication L’Orient-Le Jour reported that “all options” will be on the negotiation table after members of Lebanon’s caretaker cabinet signed off on an amended proposal adding 1,400 square kilometers to Lebanon’s claim. John Desrocher, the former US ambassador to Algeria, will lead the American team mediating the indirect discussions.

Riad Salameh and his associates are facing legal action in France for alleged corruption and money laundering. An anti-financial crimes NGO and a group of lawyers filed a lawsuit in France against the central bank head, his younger brother Raja, his son, his lawyer (who is also his nephew) and his assistant in relation to the “suspicious” purchase of properties worth hundreds of millions of euros. Last week, the offices of Raja Salameh were sealed and computers were confiscated after Lebanon’s public prosecutor launched a local probe into the alleged embezzlement of about $330 million in commissions allegedly transferred from BDL to a firm owned by Raja, which is being investigated by Swiss authorities.

Lebanon has no choice but to dip into the central bank’s foreign currency reserves to finance a cash card for the country’s most vulnerable families, the outgoing prime minister said. In an interview with al-Hurra TV, Hassan Diab said that the program, which should provide financial support to some 750,000 families, would cost around $1 billion and that the monthly cash payments would depend on how subsidies are reallocated. Riad Salameh has previously insisted that he would not touch Banque du Liban’s mandatory reserves — a minimum of 15 percent of the total dollar deposits that commercial banks must keep at BDL — since they belong to depositors. Caretaker Finance Minister Ghazi Wazni warned in April that Lebanon will run out of money to cover imports of necessities by the end of May.

The central bank will launch its new currency exchange platform this week, the bank said. The Sayrafa application aims to establish an official parallel market exchange rate between the lira and foreign currencies that will be used across banks and licensed exchange shops; personnel at these organizations were trained on how to use it two weeks ago. However, Banque du Liban has released scant details on the platform, including the exact launch date and the rate for transactions.

Some 130,000 doses of the AstraZeneca COVID-19 vaccine and 29,250 doses of the Pfizer-BioNtech jab arrived in Lebanon over the weekend, while health officials urged compliance with preventive measures. Petra Khoury, the head of the executive committee for the vaccine rollout, said that 100,000 people should receive invitations to book a vaccine appointment in May this week, ramping up the speed of the inoculation rollout that has seen less than 5 percent of adults receive two doses so far. The caretaker health minister and the head of the vaccine committee said that while coronavirus cases and deaths were decreasing, Lebanon is still not out of the woods with its struggle against the pandemic.

Efforts are ongoing to clear thousands of dead fish that washed up on the shores of Lake Qaraoun in the West Bekaa, while the Health Ministry warned against eating them. Over the weekend, teams from the army and civil defense as well as volunteers deployed to remove the dead carp from the lake, which is contaminated by agricultural and industrial waste that successive governments have failed to tackle. The Health Ministry said the fish, which biological experts told L’Orient-Le Jour were poisoned by bacteria resulting from pollution, had been picked up and sold to unassuming customers who were at risk of serious health complications.

Security forces arrested two brothers for their alleged involvement in smuggling drug-laced pomegranates to Saudi Arabia, the caretaker interior minister said. In addition to the two brothers, security forces are on the hunt for two others thought to be involved in the plot, Mohamed Fehmi told MTV during a tour of Bekaa Valley border checkpoints, claiming there was “no evidence” Hezbollah, often accused of smuggling goods to and from Syria, is responsible. The discovery of 5 million pills of the amphetamine Captagon stuffed inside pomegranates delivered to Saudi Arabia led the kingdom to impose a blanket ban on imports of Lebanese produce. Farmers say the ban poses a major threat to their trade.

The French foreign minister is due in town this week after announcing that France is following through with its threat of sanctions against Lebanese leaders. In a statement released Thursday, Jean-Yves Le Drian said that Paris had “started to implement restrictions on access to French territory against personalities involved in the current political blockage or involved in corruption,” but did not specify how or against whom the measures were being taken. It has now been almost nine months since Lebanon had a fully empowered government, and prospects of renewed talks between the president and prime minister-designate appear slim.

Want to get the Morning Brief by email? Click here to sign up.Lebanon and Israel are set to resume US-mediated talks on demarcating their maritime borders today. Talks were originally launched in October, but stalled in November after both sides presented contrasting maps for the proposed border line that would divide currently disputed territorial waters. A correspondent for our sister...

Nakba anniversary, EU sanctions, Eid al-Fitr begins: Everything you need to know to start your Thursday

From friend to foe: The EU prepares sanctions on Lebanon

Lebanon faces ‘total darkness,’ US sanctions, two-day Eid lockdown: Everything you need to know to start your Wednesday

Is there even a glimmer of light left at the end of Saad Hariri’s tunnel?