Not so mighty now: What remains of the Strong Lebanon parliamentary bloc?

The bloc has been weakened by the resignation of several of its independent members and undermined by dissension within its ranks. Even the Free Patriotic Movement’s long-standing ally the Armenian Tashnag party appears to be increasingly distancing itself from the bloc. 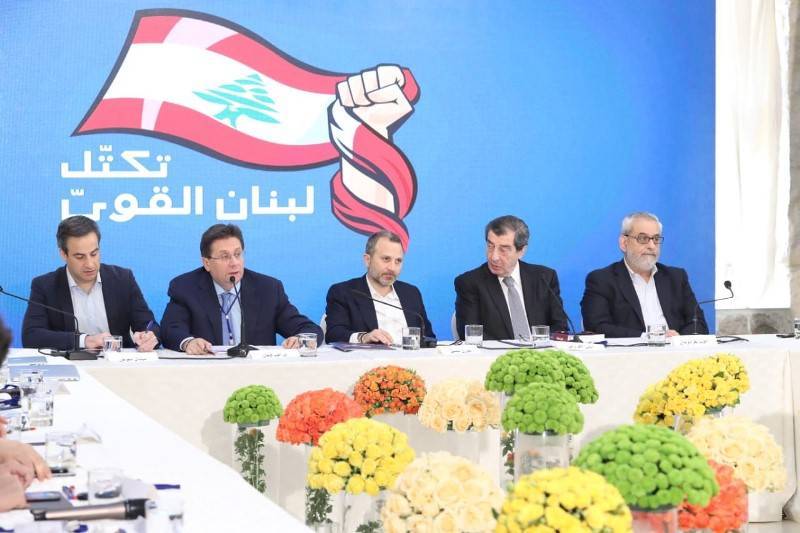 Michel Moawad, on the left, and Elie Ferzli, second from the right, are no longer members of the Strong Lebanon bloc. (Credit: NNA)

On the evening of May 6, 2018, the Aounist camp had something to celebrate. Having formed very flexible alliances, the camp won 29 seats in legislative elections, 11 of them going to independent candidates. This group later formed the Strong Lebanon parliamentary bloc.

Almost three years later, the euphoria gave way to gradual disintegration within the group, leaving it with 24 MPs only, counting three members affiliated with the Tashnag, Druze MP Talal Arslan, Antoine Pano, a retired general, and Farid Boustany — the latter two are both close to the FPM but not members of the party. Even with 24 members, the group remains the largest parliamentary bloc.

But the Future Movement, which currently retains 20 seats in Parliament, is seriously closing the gap with the Aounist bloc, especially if we only consider the FPM MPs within the parliamentary group.

The removal of Deputy Speaker Elie Ferzli from the bloc a few days ago did not come as a surprise.

Ferzli had, in fact, gradually moved away from the group in recent months because of deep differences with FPM leader and former minister Gebran Bassil, who is also the bloc’s head.

Ferzli’s relations with Bassil, whom he accuses of working to undermine state institutions, reached a point of no return when the deputy speaker called on the army chief, Joseph Aoun — who is seen as a likely challenger to Bassil in the next presidential elections — to take power by forming a transitional government.

This act of tacit rebellion, which is said to be inspired by former Aounists close to the Yarze office — the army leader headquarters — raised once more questions about the future of the so-called “strong” bloc.

While Ferzli was removed for his insubordination, but also for his privileged relations with Bassil’s major adversaries, i.e., Parliament Speaker Nabih Berri and Prime Minister-Designate Saad Hariri, different circumstances motivated, several months ago, the voluntary and gradual departure of four other independent MPs.

Chamel Roukoz, former brigadier general and the other son-in-law of President Michel Aoun and therefore a potential rival of Bassil’s at more than one level, gradually abandoned the bloc’s ranks until he broke away from it on Oct. 13, 2019, which marked the day back in 1990 when the Syrian forces launched an attack on Aoun, invading his Presidential Palace in Baabda.

Since then, Roukoz has not missed an opportunity to criticize the FPM leader head-on, but has not attacked Aoun directly.

Although he is not a member of the FPM, Roukoz is seen as a competitor to Bassil in the battle for succession within the Aounist party.

Bassil also failed to retain three other members of his group: Neemat Frem, Michel Moawad and Michel Daher all walked out of the bloc in turn.

Frem and Moawad resigned from Parliament in the aftermath of the Aug. 4 Beirut port blast, expressing their disagreement with the authorities’ management of the disaster. Daher left the bloc for the same reason, but retained his seat as MP.

Besides the FPM leanings under Bassil’s leadership, notably the party’s alliance with Hezbollah, these figures disapprove of Bassil’s authoritarian style and his almost total control over the bloc.

Within the FPM as well as within the parliamentary bloc, Bassil has a reputation of leading alone and of not tolerating any dissenting voices.

Since the Oct. 17, 2019, uprising, Bassil is no longer reluctant to put down any opposition within his bloc, including within the historical Aounist family.

Meanwhile, FPM MPs such Simon Abi Ramia, Alain Aoun, Ibrahim Kanaan and Ziad Aswad, who now constitute the “rebel clan,” no longer hide their differences with their political boss. None of them, however, is planning to walk away. They all appear to be waiting for the party landscape to stabilize ahead of presidential elections slated for the fall of 2022.

Bassil is well aware of this and has been preparing to stifle any attempt at defection within the FPM.

“In Metn and Jbeil, he is already trying to replace the party’s regional coordinators in a bid to pull the rug out from under Ibrahim Kanaan’s and Simon Abi Ramia’s feet before the legislative elections. He wants to have people who are loyal to him,” revealed a former FPM member.

Despite all these increasingly loud dissonant voices, Bassil appears to be here to stay. As long as his alliance with Hezbollah lasts and he continues to enjoy the president’s unconditional support, which grants him extra power, Bassil is the one who controls the game.

Bassil also realizes full well that the three Tashnag MPs will not leave the bloc, even if they are increasingly distancing themselves from political decision-making within it.

The same goes for MPs who were propelled into Parliament thanks to the FPM electoral machine rather than their popularity, such as Boustany and Pano.

The Tashnag is true to the tradition of supporting the incumbent president. “Whatever his political affiliation, we always stand alongside the head of state who remains the supreme symbol of state and legality,” said Hagop Pakradounian, the secretary-general of the Tashnag party.

Adhering to this principle, Pakradounian and the other MPs of his party, Alexandre Matossian and Hagop Terzian, see no reason to leave the ranks of the Aounist bloc.

Pakradourian added, however, that they continue to preserve their independence, something that has sometimes even led them to take positions radically opposed to that of Bassil.

This was particularly the case during parliamentary consultations, when the Tashnag backed the naming of Hariri to form a new government. Lebanon’s remains without an empowered cabinet more than six months later due to an ongoing dispute between Aoun and Hariri over the distribution of ministerial portfolios.

Pakradourian contends that disagreements and a certain degree of leeway are aspects of democracy, which, according to him, should prevail in any political grouping.

The head of the Tashnag party recognizes, however, that behind the ad hoc alliances concocted in the wake of the legislative elections with “outsiders” or independent figures, who were later integrated into a partisan bloc, there existed narrow interests that sometimes prevented these alliances from surviving the legislature’s term.

This was the case a few years ago with the Zahle and Metn MPs, Elie Skaff and Michel Murr — both now deceased — when they left the ranks of the Aounist bloc, according to Pakradourian, who sought to justify the defections of independents within the Aounist parliamentary bloc.

On the evening of May 6, 2018, the Aounist camp had something to celebrate. Having formed very flexible alliances, the camp won 29 seats in legislative elections, 11 of them going to independent candidates. This group later formed the Strong Lebanon parliamentary bloc.Almost three years later, the euphoria gave way to gradual disintegration within the group, leaving it with 24 MPs only, counting...