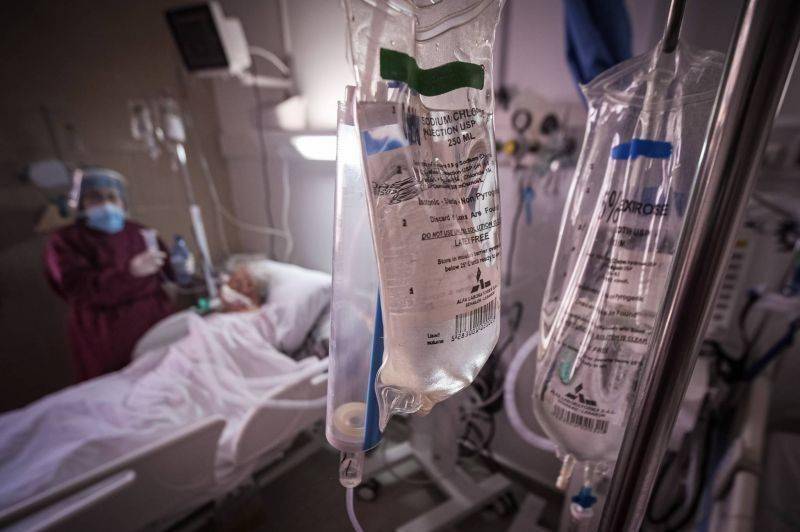 A patient lies in an intensive care unit for Covid-19 in a hospital in Lebanon. (Credit: João Sousa/L’Orient Today)

Lebanon has long prided itself on its health care system, and with good reason. Until recently, at least, the country could count on an impressive number of doctors (three doctors per 1,000 inhabitants — triple what the World Health Organization typically recommends), who were often trained in Europe and the US, and had at their disposal the latest and most sophisticated machinery. All these advantages turned Beirut into a regional hub for medical tourism, which remained attractive for a long time, notably for Iraqi patients and Lebanese from the diaspora, despite growing competition in neighboring states.

Yet, while some medical professionals wax lyrical about their country’s health system, especially when talking to foreigners, they also note its downsides, which have been exposed and amplified by the overlapping crises gripping Lebanon. And this is at all levels: from hospital services to public health policy, including patients’ access to medical care.

For decades, the Lebanese health system has been based on the primacy of private hospitals. While Lebanon runs 29 public hospitals, this number pales in front of their for-profit counterparts: according to Health Ministry figures, the country boasts 157.

This medical system is overwhelmingly skewed toward high-level curative medicine — which consists of treating conditions as they arise, through generally costly interventions. In contrast, preventive medicine evinces far less interest, although it encompasses such essential fields as general medicine, neonatal care and vaccination.

To cover expenses, costs must be constantly reduced, a logic evidenced in particular by the very insufficient hiring of nurses. A 2017 European study estimated that Lebanon had only three nurses per 1,000 inhabitants, compared to an average of eight in EU countries. Nurses are not just under-represented; hospitals pay them poorly. Some private hospitals developed a policy of pressuring staff to focus on revenue-generating activities.

And while shedding costs wherever possible, private hospitals encourage wasteful spending that inflates their own bills, notably through widespread over-testing and over-prescription. Patients suffering from relatively minor conditions, such as knee injuries or lower-back pain, are routinely sent for an MRI.

Many patients, having endured convoluted and costly medical investigations, then expect the overmedication that all too often follows.

A state in poor health

Yet, these drawbacks are just symptoms of a deeper problem, rooted in the relationship between a hyper-privatized sector and the country’s decrepit public infrastructure.

Although the Health Ministry commands the third largest budget of any “service” ministry in Lebanon, it is most notable for what it does not do.

This is due to “the lack of personnel or motivation, or to the lack of funding,” according to the ministry’s own website.

For example, unlike most such institutions around the world, it runs no nationwide blood bank or ambulance network. Nor, critically, does it maintain a national laboratory — as the country’s previous facility was torn down. All of these services would have been vital for testing functions in relation to pharmaceutical quality control, environmental hazards, food safety, and epidemics.

Rather than shore up its own capacities in essential fields, the ministry has subcontracted ever larger portions of the health care sector to other, mostly profit-driven entities. Indeed, the ministry falls short when it comes to essential forms of coordination, oversight and regulation, in a sector kaleidoscopically divided between private hospitals, public facilities, civic organizations and foreign actors.

And although the Health Ministry does issue decrees and circulars intended to govern the sector, they are rarely implemented. A good example is the introduction in 2011 of unified medical prescriptions, designed to centralize data and nudge physicians to prescribe generic alternatives over expensive brands.

Rather than assume a leadership role, the Health Ministry ended up restricting its work to discrete functions, notably listing the drugs to be subsidized by the central bank, negotiating accreditations for private hospitals, appointing representatives to the boards of public hospitals and supervising routine vaccination campaigns — usually performed by NGOs.

The ministry’s diminutive role thus raises an obvious question: What, exactly, does it do with its considerable budget?

The answer resides in a track record of lavishing resources on privately owned entities at the expense of its own infrastructure.

This trend, as shown in a study published in the Eastern Mediterranean Health Journal, harks back to Lebanon’s 1975–90 Civil War, during which the share of private health care within the Health Ministry’s budget went from 10 percent to a staggering 80 percent. A recent study by the Beirut-based Knowledge to Policy Center found that public hospitals, for their part, received less than 2 percent of all money spent on health care in the country.

The ministry’s structural bias toward the private sector was made more visible still by the COVID-19 epidemic, during which private hospitals have been reluctant to shoulder their share of responsibility in fighting the disease. The Health Ministry has continued nonetheless to award them covid-related resources at the expense of its own facilities.

The bulk of Health Ministry handouts to private facilities comes from reimbursing expenses incurred by patients enjoying some form of state sponsorship. Indeed, a broad cross-section of society relies on state-backed social security schemes, including the National Social Security Fund, the Civil Servants Cooperative and coverage for army and security personnel. Even those with no insurance at all are technically entitled to subsidized medical care. In state-run facilities, public schemes cover up to 95 percent of bills; in private hospitals, they cover 85 percent. Given such a small disparity, many patients go for the better service. In 2008, as per the Health Ministry’s own, sporadic figures, over two-thirds of uninsured patients opted for private hospitals.

As patients default to private hospitals, the latter minimize their own spending while maximizing billing. To make matters worse, the Health Ministry exerts no oversight on what it is reimbursing. Rather, it negotiates with each hospital an annual ceiling up to which the ministry will reimburse, in a process that is not quite transparent and might encourage corrupt practices. Incredibly, this lump sum is not ultimately audited.

This cobbled-together sector finally includes an array of apolitical NGOs, both local and international, that have flourished in the country since the Civil War. Meanwhile, UN agencies assume some of the medical costs related to Syrian and Palestinian refugees. This profusion of health providers, often dependent on streams of funding from abroad, further relieves the state of its own duties. It also reinforces a very Lebanese instinct, to trust anything more than the state — which consequently has even less incentive to change.

A public at a loss

By starving itself of both money and power, the Health Ministry is failing to even begin to invest in the public health infrastructure that Lebanese need as their purchasing power withers. Instead, citizens are left to their own devices, to seek affordable medical treatment in this increasingly disjointed, almost labyrinthine landscape.

To be admitted into a hospital, patients must demonstrate upfront that their expenses will be covered by a private policy, a social security scheme, the Health Ministry itself or a deposit in cash.

Another growing problem relates to the decreasing value of the Lebanese lira: Private hospitals match their bills to its black-market value, while the NSSF sticks to an older price list following the official exchange rate.

Lack of coordination between private hospitals means that patients must assemble their own health records and take them from one facility to the next. They activate their networks even to find the right medication, which may be unavailable in some pharmacies, prohibitively expensive in others, poorly stored or merely counterfeit. Without a national blood bank, people also send out requests for specific blood types over social media.

Such twists and turns can become very costly for the individual patient. And, unsurprisingly, the burden falls heaviest on society’s most vulnerable. In principle, the Health Ministry guarantees coverage for uninsured patients even in private facilities. In practice, however, the latter openly discriminate against so-called “public patients,” who are likely to enjoy restricted treatment options. This bias means that needier patients often spend extravagant amounts of time seeking facilities that will treat them. When they do find care, many struggle to pay their share of the costs. An American University of Beirut study published in 2005 showed that the poor spent on average 20 percent of their total income on health care, more than twice as much as the rest of the population. Where family networks don’t suffice to pull together the needed resources, some Lebanese resort to political factions and leaders who enjoy strong ties to specific medical establishments, from which they can obtain preferential conditions. They also frequently run foundations, charities and dispensaries that provide affordable basic care.

What is the solution?

In the minds of many Lebanese, a growing role for the private sector remains the answer, given the government’s bankruptcy and the Health Ministry’s gross mishandling of the coronavirus crisis. But the reality is that most private institutions are no longer viable: Their middle-class client base is rapidly shrinking, medical tourism is waning and the costs of their equipment is rising prohibitively. They are not unlike Lebanon’s banks, flamboyant only as long as the state foots the bill. International aid programs and local NGOs provide no fallback either. Their interventions are limited in scale, restricted in scope and disconnected from one another; their overall efficiency will always be dependent on the state’s ability to coordinate the sector.

Given the ministry’s state of dereliction, setting overly ambitious goals will only guarantee that nothing at all happens. But the state need not be perfect: All it must do is begin to assume its most basic, fundamental roles, for which there simply is no substitute. First and foremost is the collection, analysis and dissemination of information — much of which can be done at minimal cost. A second priority is to start redirecting resources, by cutting back on subsidies flowing to the most expensive and inadequate private hospitals and branded drugs. A growing fraction of the ministry’s budget must shift to the benefit of primary health care centers and generic medication.

Finally, it behooves the Health Ministry to fundamentally rethink the country’s social security system, if Lebanese are to enjoy some form of safety net in their moment of need. None of this can happen overnight. But the country must not tumble endlessly down a vicious spiral either: Simple steps are what it takes to begin to climb back up.

Fahad al-Sudaid is a researcher at the Synaps network. This article was originally published in French in L'Orient-Le Jour.

Lebanon has long prided itself on its health care system, and with good reason. Until recently, at least, the country could count on an impressive number of doctors (three doctors per 1,000 inhabitants — triple what the World Health Organization typically recommends), who were often trained in Europe and the US, and had at their disposal the latest and most sophisticated machinery. All these...