How Michel Aoun is driving a wedge between Hezbollah and Amal

The differences between the two Shiite parties over the president and his son-in-law Gebran Bassil have come to light. 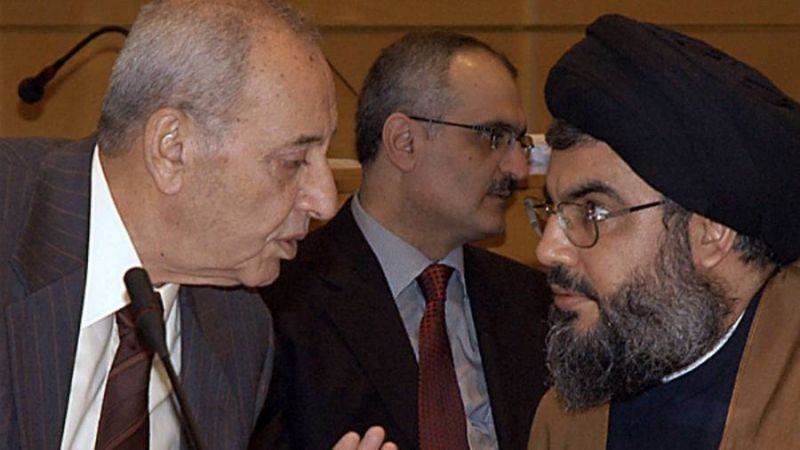 Berri and Nasrallah during a meeting in 2007. (Credit: Hassan Ibrahim/AFP)

They are not in the habit of settling their differences publicly. Between Hezbollah and Amal, the rule has been clear ever since the two parties forged their strategic alliance back in 1992: their differences are frequent but must never surface so as not to divide the Shiite street again or risk a replay of the infighting between the groups at the end of the 1980s.

On March 22, the Amal Movement’s political bureau issued a statement calling for the formation of a government of independent specialists. This was a direct response to Hezbollah Secretary-General Hassan Nasrallah’s statements three days earlier.

In his speech on the evening of March 18, Nasrallah advocated for the formation of a “techno-political” cabinet, seemingly siding with President Michel Aoun in the standoff between him and Prime Minister-designate Saad Hariri.

Berri decided to retaliate a few hours ahead of Hariri and Aoun’s meeting on March 22, in a move clearly designed to show his support for the premier-designate.

Hariri and Berri have enjoyed close ties for years, reinforced in recent months by their common antagonism toward the Aounist camp, which they wish to completely subvert.

On March 20, the president sent Hariri a suggested cabinet lineup and requested he stick to it, prompting the latter to contact his traditional partner to assess his options.

According to a close associate of Hariri, Berri’s response to the premier-designate was clear: “Do not take any initiative, keep calm. I have your back and I will make a stance tomorrow to clear any misunderstanding.”

Hariri also expressed his concern about Hezbollah’s position. The head of the Future Movement does not wish to cut dialogue with the party.

“Don’t worry, I’ll take care of it. The most important thing is that you do not back down and make any concessions. If you do, then don’t count on my support anymore,” the head of the legislature reportedly told Hariri, according to the aforementioned close associate of Hariri

This turn of events highlighted a new polarization of the political scene: it appears that Aoun is now backed by Hezbollah, and Hariri by Berri.

The Shiite party has nevertheless taken the trouble to reassure both the speaker and the prime minister-designate on the content of Nasrallah’s speech.

The stance vis-à-vis the president and his son-in-law has been the main point of contention within the two main Shiite parties for several years now.

For Berri, “the alliance between Hezbollah and the Free Patriotic Movement is a sign of political weakness,” says a close associate of the head of the legislature. For Hezbollah, this alliance provides the party with a Christian political cover for its actions.

But the recent political row between the two Shiite parties is not something new. Back in 2016, Berri was opposed to the election of Aoun as president, even though Hezbollah had officially endorsed him.

The speaker had clung to his support for the candidacy of Sleiman Frangieh, head of the Marada Movement, whom he considered to be an integral part of the political system that emerged with the Taif Agreement, unlike Aoun and Bassil who never concealed their will to destroy it.

“With his alliance with Hezbollah, Aoun has ignored the [unwritten] understanding that has been in force until then,” says Berri’s close associate, alluding to the power-sharing between the three dominant political communities, — i.e., Sunnis, Shiites and Christians — while the current president is trying to claim pre-eminent power, which, from Berri’s point of view, would cause the system to become dysfunctional.

The leader of the Amal movement, a king of Lebanese clientelism, took a very dim view of the arrival of these newcomers who might disturb the deeply entrenched system of role distribution he has overseen since the end of the Civil War.

What’s more, Aoun has built a large part of his political discourse on the fight against the so-called [ruling] troika of Hariri, Berri and Jumblatt, whom he considers the “symbols of the old system” and the “pillars of the Taif Agreement.”

“We strongly disagree with Berri concerning Aoun and Bassil,” admits a source close to Hezbollah.

Another source familiar with the situation adds, “Berri has often made it clear to Nasrallah that he will, under no circumstances, become an employee of Gebran Bassil or Michel Aoun.”

The situation was so tense that the two Shiite parties held a meeting on the evening of March 22 in a bid to prevent the conflict from escalating further.

This is how they have always worked out their differences at any sign of an imminent crisis.

In 2020, during the month of Ramadan, Berri and Nasrallah held a crucial meeting for over four hours, according to sources from both parties. During the meeting, many issues were discussed, but most importantly, Berri sought to convince Nasrallah of the need to reach an understanding with the Sunnis in order to protect the Shiite street from strife.

At the same time, the Amal leader had sought to talk Hariri out of any confrontation with Hezbollah, which risked fomenting discord between Shiites and Sunnis.

Between Amal and Hezbollah, disputes have been recurrent since 1992.

On May 7, 2008, Amal supported Hezbollah’s coup de force (mainly against the Future Movement), when its operatives seized control of parts of Beirut. Berri went as far as to shield the pro-Iranian party in the capital against accusations that it had used its weapons on the domestic scene, rather than exclusively for their purported function: resistance against Israel.

Berri, however, was careful not to get involved in the Hezbollah-led attack in the Chouf, the mountain territory of Druze leader Walid Jumblatt, so as not to come into confrontation with the person Berri refers to as “his best enemy.”

The differences between the two sides re-emerged once more with the outbreak of the Syrian war. Hezbollah became deeply involved in the conflict, unlike its Shiite ally, which historically had maintained much stronger ties with Damascus.

Up until the election of Aoun as president, the differences had abounded but without ever turning into open conflicts.

Despite the most recent mini-crisis between the two sides, Hezbollah has reassured those concerned about the relationship’s deterioration. “There is a strategic decision not to let any dispute develop or impact the community,” says the source close to Hezbollah.

In order to prevent tension in the Shiite street, Hezbollah is keen on maintaining good relations with Amal, and “avoids provoking Berri for fear of chaos,” the aforementioned source adds.

It is unlikely the pro-Iranian party will try to absorb Amal’s supporters, as within the Shiite community opinions and positions on both local and international affairs are too divergent for a single party to control or encompass an entire sect.

Hezbollah needs Amal, at least for now, so much so that if Amal did not exist, the Shiite party would have invented it.

Berri maintains sprawling influence in the administration, and his connections with Lebanese and foreign stakeholders render him a perfect front for Hezbollah.

At the rank-and-file level, tensions between the two sides seem to take on a more social character, as some of Hezbollah’s members receive payments in dollars, while members of Amal, whether within the movement itself or employees in public institutions, get paid in Lebanese pounds, since their funding comes from within the state. This has served to widen the gap between the two parties.

They are not in the habit of settling their differences publicly. Between Hezbollah and Amal, the rule has been clear ever since the two parties forged their strategic alliance back in 1992: their differences are frequent but must never surface so as not to divide the Shiite street again or risk a replay of the infighting between the groups at the end of the 1980s.On March 22, the Amal...

Salameh investigated, Hariri heads to Moscow, Military Tribunal to try protesters: Everything you need to know to start your Wednesday