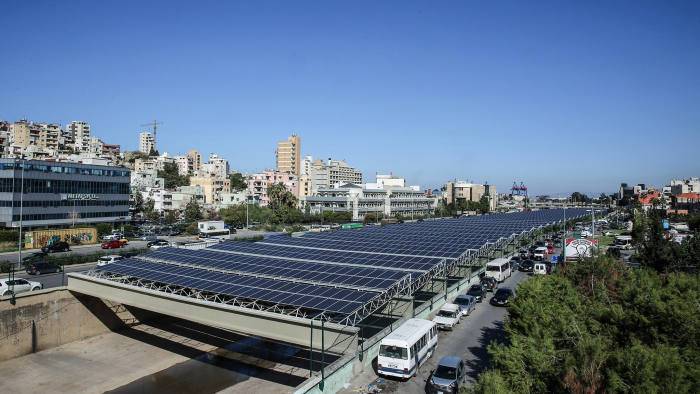 Despite ambitious plans to generate 30 percent of Lebanon’s energy needs from renewable sources by 2030, funding for such projects is now largely frozen. (Credit: AFP)

BEIRUT — In late 2018, one year before Lebanon descended into a spiraling economic and political crisis, Lebanese officials announced an ambitious increase in the country’s goals for development of its nascent renewable energy sector.

Thirty percent of the country’s electricity supply was to come from renewable sources by 2030, a doubling of the previously stated target of 15 percent — despite the fact that the country was not even on track to meet its 2020 target of 12 percent renewable energy.

Now Lebanon’s energy sector finds itself in a catch-22 situation. At the moment when the country urgently needs alternative energy sources to reduce its reliance on imported fuel — which is draining the country’s rapidly shrinking foreign currency reserves — financing for new renewable energy projects is largely frozen until the country’s leaders form a government and carry out an extensive series of reforms.

“We missed the opportunity to put in place the basis for a long-term renewable energy sector or renewable energy integration [before the crisis],” Marc Ayoub, project coordinator and energy researcher for the energy policy and security program at the American University of Beirut’s Issam Fares Institute told L’Orient Today. “And today, during the crisis we have realized that we cannot continue without them.”

Where does Lebanon stand with renewable energy today?

Lebanon’s energy supply today relies mainly on plants burning heavy fuel oil and diesel oil. The annual deficits of state utility Electricité du Liban, which reached $1.8 billion in 2018, are largely driven by the cost of fuel imports, and now the central bank is rapidly running out of foreign reserves to continue funding them.

While a parliamentary committee last week approved a stopgap transfer of $200 million to EDL to purchase fuel for the next two months, future payments remain an open question.

Meanwhile, due to chronic shortages in the electricity supplied by EDL and daily power cuts, private diesel generators provide some 37 percent of demand. Renewables currently represent about 3.5 to 4 percent of the country’s total energy mix, Ayoub said.

As of 2019, the country had about 350 MW of installed renewable energy capacity, the majority of it hydropower, according to a 2020 report prepared by the International Renewable Energy Agency in collaboration with the Lebanese government. The report projected that the country would save some $249 million a year in power generation costs if it reached the goal of 30 percent renewable power.

To get to that target, the World Bank estimated that the country needs an additional 4,700 MW of renewable energy over the next 10 years, noting that scaling up renewable energy “will not just address cost and environmental considerations, but also safeguard the country’s energy security.” The World Bank also recommended switching from liquid fuels to natural gas, which is cheaper and cleaner, and upgrading the transmission network.

Elie Maalouf, operations manager of Lebanon-based renewable energy company ECOsys, entered the industry in 2008. “In the first few years, the market was still not aware and the technology was expensive,” he recalled.

But development began to pick up in 2011, he said, when Banque du Liban launched a subsidized loan program for renewable energy and energy efficiency projects. It eventually gave out $560 million to some 940 projects, many of them small rooftop solar and street lighting projects.

The government also began to move on larger-scale projects. In 2017, the Ministry of Energy and Water called for bids to build 12 solar farms around the country, for a total of 180 MW of power. In 2018, the ministry signed power production agreements with private companies for three wind farms in Akkar, which were to produce 200MW of power. (Both projects are now on hold.)

Like the rest of the power sector, renewable energy projects were hampered by the failure of officials over the past two decades to set up an independent electricity regulatory authority that would issue licenses for energy projects — removing such decisions from the realm of politics, at least in theory — as had been mandated by a law passed in 2002.

But the renewable sector had its own particular issues. For instance, although EDL’s board issued a decision in 2011 allowing “net metering,” under which consumers who have installed solar panels on their property can return excess energy to the grid in exchange for a discount on their bills, to date no law has been passed to regulate the process or the distributed renewable energy sector in general. In addition to allowing consumers to sell power back to the grid, such a law could set up a framework for peer-to-peer trading of power between individuals without going through EDL and “power wheeling,” allowing a company with multiple locations, for instance, to install solar panels at one location and get a discount on its energy bill at another.

Meanwhile, the ability of consumers to actually benefit from the cost savings of net metering — or to provide power to the grid — has been limited by bureaucratic bottlenecks.

The village of Qabrikha in south Lebanon, for instance, installed a municipal solar farm in 2018 with assistance from the United Nations Development Program and European Union, but Ismail Hijazi, who was mayor at the time of the installation and is now a municipal council member, told L’Orient Today that three years later they still can’t hook it up to the EDL grid.

They can only use the solar power when the state electricity is cut, to reduce the amount of generator electricity needed. While, Hijazi said, the municipality has benefited from some cost savings on diesel fuel as a result, the expected savings on EDL bills have not been realized.

The issue, Ayoub said, was that renewable energy was always approached as an afterthought.

“Before the crisis, renewable energy was considered as an add-on to the existing generation schemes … but not as the centerpiece of energy planning,” he said.

Government officials have also cited a lack of available and affordable land as one of the reasons for the slow progress of renewable energy development, Rony Karam, president of the Lebanese Foundation for Renewable Energy, told L’Orient Today.

But when the foundation and the National Council for Scientific Research set out to map available land with suitable conditions for solar, wind and hydropower plants, Karam said, “We found out that, actually, what they told us was completely wrong. There’s plenty of land, including public land.”

The survey published in 2020 found sites around the country with capacity to provide more than 13,000 MW of solar energy, 5,000 MW of wind and 2,000 MW of hydro and pumped hydro projects — far more than the amount needed to meet the 30 percent goal.

Karam attributed public officials’ lack of interest in renewable energy to their vested interests in the status quo.

“The whole political class has been getting very rich by importing fuel,” he said. “Why would they have an incentive to produce their own energy locally unless we’re bankrupt and we can’t pay?” From that perspective, he added, the current economic crisis is “actually an opportunity.”

Even before the financial crisis became full blown, financing for projects was drying up.

Maalouf said the subsidized loans from BDL stopped about two years ago, and a number of projects his company had had lined up were canceled as a result.

Now with an ongoing currency crisis and deadlock over government formation, outside funding from both private investors and international organizations has also come to a halt.

Carol Ayat, head of energy finance at Bank Audi, said that any return of international financing for the renewable energy sector would be contingent on formation of a government “acceptable to the international community,” a deal with the International Monetary Fund and appointment of an independent regulatory authority for the electricity sector.

Given those conditions, Ayat said it will be an uphill battle to reach the 30 percent renewable target by 2030.

“It’s unlikely that any progress will be done in 2021,” she said. “In 2022 we will have eight more years, and we haven’t done anything on the ground yet … We keep on putting out plans, ambitious plans. What we are lacking is execution.”

“Without reforms in the sector, without adopting a very transparent and competitive bidding process, before the establishment of a regulatory authority for electricity, there is no possibility to get any kind of financing,” he said.

Both Maalouf and Osta said they are currently focusing on projects outside of Lebanon.

As bleak as the energy situation in the country looks, some are hoping that the crisis could present an opportunity to build a better system.

Karam, for his part, said he is hoping for a Lebanese Green Deal that would use investments in green energy to help pull the country out of the economic crisis.

“Part of us getting out of this whole mess is to invest strongly in renewable energy, not only to solve the electrical problem — obviously, this is a priority — but also for the environment, to clean up the coast, for quality of life, for tourism,” he said.

Once the right conditions are in place, Ayat said, “the international community is still there ready to fund Lebanon, still the interest is there — it’s not going to stay there forever, but for now it is. There’s a lot of money in renewables, and we need to have a vision that’s centered around renewables.”

While the financing is on hold, she said, officials should move to set the stage by enacting the distributed renewable energy law to enable the private sector to install more decentralized solar facilities.

In the meantime, while large-scale projects are on hold, those who can afford it — a limited group given that the equipment is imported and must be paid for in dollars — have already been rushing to install solar panels on individual homes and businesses.

While decentralized energy generation can fill some of the gap, Ayoub said, a real energy solution for the country will require large-scale projects.

BEIRUT — In late 2018, one year before Lebanon descended into a spiraling economic and political crisis, Lebanese officials announced an ambitious increase in the country’s goals for development of its nascent renewable energy sector.Thirty percent of the country’s electricity supply was to come from renewable sources by 2030, a doubling of the previously stated target of 15 percent —...