As its strategic alliance with the Aounist camp faces challenges, Hassan Nasrallah’s party appears to favor its relations with the head of the Sunni community, Saad Hariri — a seemingly more convenient partner 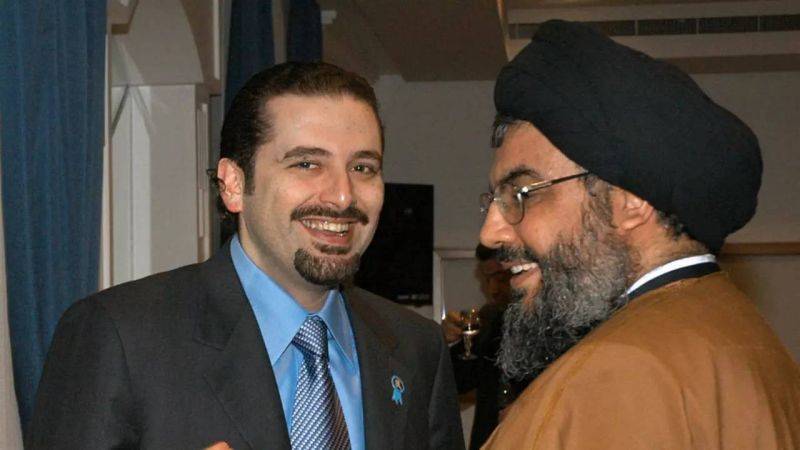 In just a few years, Hezbollah has gone from being a party on the fringes of the Lebanese political scene to being its arbiter.

The Lebanese political game, by its nature, cannot be dominated by one party alone, but Hezbollah is now controlling the tempo of that game, deciding on the composition of the future cabinet and the balance of power.

The rest of the political players appear to be positioned in the game according to the relations they maintain with the Shiite party.

The latest example of this was the Feb. 16 speech by Hezbollah Secretary-General Hassan Nasrallah in which he listed all the points in the war of prerogatives waged by his ally President Michel Aoun against his de facto partner, Prime Minister-designate Saad Hariri, only to tip the scales in favor of the latter.

While Nasrallah proposed a cabinet of 22 or 24 ministers, as opposed to the 18-minister lineup Hariri had presented, Nasrallah mainly stressed, as Hariri has, that no party ought to benefit from a “blocking third” — or effective veto power — in the next government, a clear jab at the head of the Free Patriotic Movement, Gebran Bassil, who is accused by his opponents of obstructing talks as long as his demand for a blocking third is not met.

So the pertinent question is: how did Hezbollah end up siding with Hariri against Bassil? This is the fruit of a long development over the past few years that has prompted the Shiite party now to consider the Sunni political cover provided by Hariri to be more significant than the Christian cover provided by the FPM.

Undoubtedly, Hezbollah wishes to maintain a balance between its good relations with the Future Movement — which, from the Shiite party’s point of view, makes it possible to avoid any Sunni-Shiite conflict — and its alliance with the FPM, which has provided it with the widest Christian political cover since its creation.

But since the collapse of the 2016 presidential compromise between Hariri and Aoun, Hezbollah has been forced to make a choice.

It has reached a point where the time of Hezbollah’s alliance with Aoun’s party — which has been privileged at the expense of all other political forces, most notably the Future Movement and Sunnis in general, and has at times irritated the party’s ally, Amal leader and Parliament Speaker Nabih Berri — seems to be over now.

Why is that? First, because relations between Hezbollah and the FPM are not as good as they once were.

The alliance is now being debated within Hezbollah itself, and some party officials no longer hide their irritation at certain “provocations” by FPM figures, according to a source close to the Shiite party.

Moreover, while the FPM rank and file are becoming increasingly critical of Hezbollah, the Aounist party has said publicly that the time has come to renegotiate the terms of the partnership reached in the 2006 Mar Mikhael agreement — an agreement that the FPM says has not allowed it to lead the fight against corruption in the way the party had envisaged it would.

“When a conflict arises between Hezbollah and the FPM, Bassil is quick to open fire at the party, raising many issues, including normalization and peace [with Israel], the fight against corruption, federalism and decentralization, and goes as far as to raise the issue of illegal weapons,” says the source close to Hezbollah.

All of this has caused a crisis of confidence between the two parties that reverberates among the supporters of Hezbollah, which, however, is well aware that Bassil cannot carry out his threats.

At the same time, Hezbollah fears Aoun and his son-in-law Bassil may be willing to make political concessions at the party’s expense in the hope that US sanctions against the FPM leader might be lifted.

On Nov. 6, 2020, the US sanctioned the FPM leader under Washington’s Global Magnitsky Human Rights Accountability Act, a first in Lebanon, on grounds of alleged corruption.

“Bassil thinks that he can use Hezbollah to become president, but the party cannot make any commitment to anyone today on this subject, because it is still too early,” says the source close to the Shiite party.

But since he is aware that his only ally is courting another partner, Bassil explained in his press conference on Feb. 21 that Christians are in favor of a Sunni-Shiite rapprochement in the region, which is beginning to emerge, and would be reflected in Lebanon in a reinforced modus vivendi between Hezbollah and the Future Movement.

“But those who think that they can revive the quadripartite agreement, and weaken Christians, are mistaken,” Bassil said, referring to the understanding reached by Nasrallah, Berri, Hariri and Progressive Socialist Party leader Walid Joumblatt following Aoun’s return to Lebanon in 2005 after 15 years in exile.

Bassil then added, as if to warn everyone that he was well aware of the ongoing talks, that Hezbollah will not ally with Muslims at the expense of Christians, because the Shiite party “does not forge alliances under the table.”

However, the alliance between Hezbollah and the FPM has, in fact, deteriorated to the point that the parties send each other cutting remarks through the media, but without exceeding certain limits.

Between the Future Movement and Hezbollah, things are almost the exact opposite.

Despite the major strategic differences between the two parties (Hezbollah is still accused of being behind the assassination of former Prime Minister Rafik Hariri), Saad Hariri has been in a modus vivendi with the Shiite party for several years now.

When in disagreement with Hezbollah, Hariri avoids raising sources of conflict, focusing instead on tactical points of agreement, based on the fact that each party needs the other. Hariri needs the support of Hezbollah to have access to the Serail, while the Shiite party believes that Hariri is the only one able to provide it with Sunni political cover.

This is a way of doing things that reassures Hezbollah, according to the source close to the party.

What’s more, Hezbollah believes that Hariri has not undermined it in recent years and has taken a different stance vis-à-vis the Shiite party since the latter’s acts of violence on May 7, 2008, and the Syrian-Saudi reconciliation, which prompted Hariri to pay a visit to Damascus.

Above all, Hezbollah appreciates Hariri’s position regarding the Special Tribunal for Lebanon, which convicted a Hezbollah operative for the assassination of Hariri’s father. Hariri, however, stressed that he wanted to preserve civil peace at all costs.

In his most recent speech, delivered on Feb. 14 to mark the anniversary of Rafik Hariri’s assassination, the prime minister-designate refrained, as usual, from attacking Hezbollah, most likely with the aim of avoiding a Sunni-Shiite conflict.

Moreover, the Future Movement is convinced that today Hezbollah needs the FPM less than it did in the past.

“When it has been politically isolated in recent years, Hezbollah needed Christian political cover, especially to engage in the Syrian [war], where it helped change the balance of power, under the pretext of the imminent threat of terrorists and takfiris,” argues a close associate of Hariri.

“Now, however, [Hezbollah] is well aware that it cannot keep going without a compromise and an understanding with the Sunnis,” the source adds.

This analysis is not, however, unanimously accepted among Sunni circles. Some figures hostile to Hariri’s policy believe that Hezbollah would only seek an agreement with Sunnis after having weakened and subdued them, as Bashar al-Assad has done in Syria.

“The understanding between Hezbollah and the FPM was made to last. It offers Hezbollah Christian political cover without which the party would have not wielded such power and played such a role in the region, even if at one point it appeared as an alliance of minorities,” says an FPM official on condition of anonymity.

The source added that the rapprochement between Hezbollah and Hariri does not worry the FPM.

As things stand now, Hezbollah appears to have a strategic need for an understanding with the Sunnis, but seeks to tactically maintain its alliance with the Aounists. It stands idly by as the two sides fight, well aware that neither of the two will gain the upper hand, and that eventually, it will emerge the winner.

In just a few years, Hezbollah has gone from being a party on the fringes of the Lebanese political scene to being its arbiter.The Lebanese political game, by its nature, cannot be dominated by one party alone, but Hezbollah is now controlling the tempo of that game, deciding on the composition of the future cabinet and the balance of power.The rest of the political players appear to be...

The ministerial statement of the incoming government