Here’s what happened over the weekend and what to expect today, Monday, February 15, and this week 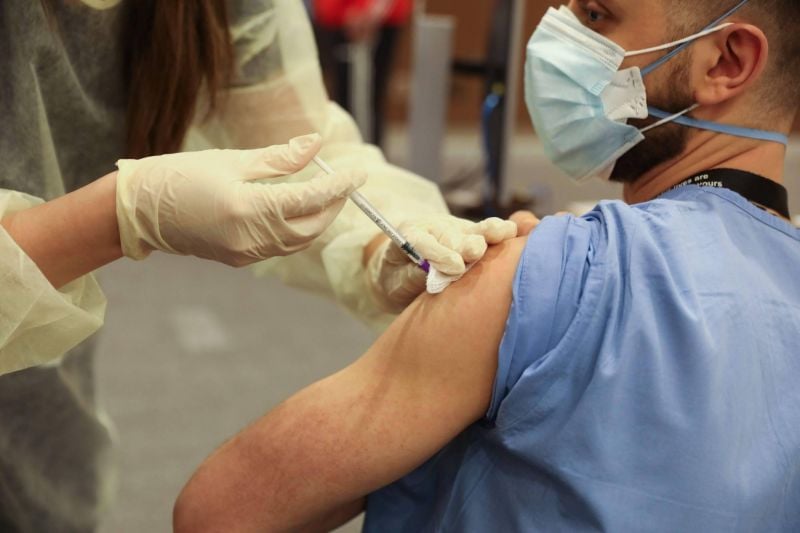 A medic receives a dose of the Pfizer-BioNTech COVID-19 vaccine at the American University of Beirut Medical Center on Sunday. (Credit: Anwar Amro/AFP)

Lebanon launched its COVID-19 inoculation campaign after the arrival of 28,500 doses of the Pfizer-BioNTech vaccine. The head of the intensive care unit at Rafik Hariri University Hospital, the main front-line facility confronting the pandemic, received Lebanon’s first inoculation on Sunday. He was followed by Salah Tizani, a famous 93-year old comedian. A World Bank official hailed the launch while insisting there should “be no wasta,” or clientelistic connections, in vaccinations. On Friday, the organization said it signed an agreement for the independent monitoring of Lebanon’s vaccination program, which is financed in part by World Bank money. With Lebanon’s death toll nearing the 4,000 mark and hospitals still near capacity, health officials have welcomed the vaccines’ arrival.

In a speech delivered on the 16th anniversary of his father’s assassination, Saad Hariri blamed Michel Aoun for the failure to form a cabinet. The premier-designate vowed he would “not back down” from his proposal for an 18-minister government, with no political group holding a “blocking third” of seven ministers to veto decisions. However, according to Hariri, the president wants to circumvent this by requesting that the Tashnag party — a political ally of the Free Patriotic Movement led by Aoun’s son-in-law — receive a portfolio outside the share of six ministers offered to the president. Aoun’s press office fired back, saying Hariri exploited the commemoration of his father’s assassination and had not accurately depicted their talks. The war of words held another fruitless meeting Friday to form a new cabinet, over half a year since the resignation of Hassan Diab’s government.

Following a week of protests outside the Military Tribunal in Lebanon, security forces on Friday forcibly dispersed activists calling for the release of activists detained in Tripoli last month. In a repeat of the scenes at countless protests since the Lebanese people took to the streets on Oct. 17, 2019, against the ruling class, security forces unleashed tear gas and water cannons on the demonstrators. An attorney with the Lawyers’ Committee for the Defense of Protesters on Thursday said the military court was detaining 23 protesters, alleging that 19 of them were illegally questioned without a lawyer present. Human Rights Watch has castigated the Military Tribunal’s past trial of civilians, while calling on Parliament to pass a law to end the widely criticized practice. Activists have called for another protest in front of the tribunal at 11 a.m. today.

The firm operating two power plants that provide around half of Lebanon’s electricity will continue to run the facilities after its contract expires today, but cautioned its grievances must be addressed. Primesouth told our sister publication Le Commerce du Levant yesterday that it will keep up its work “within the confines of a request” by the caretaker premier, who promised “that he will resolve our issue this week.” In a subsequent press release, the firm said that while it has been asked to renew its contract for a year, it is still owed dues and wants a solution regarding the mechanics of payments. The Energy Ministry, for its part, said that the premier-designate convened a meeting Saturday on the contract with relevant ministers and the head of the central bank, which will tackle the matter.

The lead investigator into the Aug. 4 Beirut port explosion is set to continue his probe this week with four more rounds of questioning. Judge Fadi Sawwan has summoned Bassem al-Qaisi, the port’s acting director-general, and Mustafa Baghdadi, the shipping agent for the vessel that delivered the ammonium nitrate in 2013, for hearings in the beginning of the week, a judicial source said. Meanwhile, the judge has scheduled hearings Thursday with Moussa Hazimeh, the former customs chief in Beirut, and ex-Public Works and Transportation Minister Youssef Fenianos, who he charged with criminal negligence on Dec. 10. Sawwan resumed his probe last Thursday with questioning of ex-army chief Jean Kahwagi, following a 55-day pause in the investigation.

Parliamentary committees are set to meet Tuesday to discuss the approval of a World Bank program to bolster social safety nets. Financed with a $246 million loan, the project aims to help 786,000 vulnerable Lebanese with cash transfers and social services. The proposed mechanism for cash transfers has stirred controversy, with the Lebanese government insisting on payouts in the depreciating local currency. In the scheme, the World Bank’s dollars would be deposited at the central bank, while aid recipients would receive cash at a below-market exchange rate of LL6,240. The World Bank approved the project, which is awaiting parliamentary go-ahead, on Jan. 12.

Hezbollah’s leader will deliver a televised address Tuesday night on the occasion of the organization’s remembrance of assassinated leaders. Hassan Nasrallah’s speech at 8:30 p.m. will “touch on a number of political subjects,” Hezbollah’s Al-Manar TV said. Nasrallah last addressed the public in a Jan. 8 speech touching on the Aug. 4 Beirut port explosion, the government formation process and other topics. Gebran Bassil, for his part, will speak to the public this coming Sunday, according to the TV station of his Free Patriotic Movement.

Want to get the Morning Brief by email? Click here to sign up.Lebanon launched its COVID-19 inoculation campaign after the arrival of 28,500 doses of the Pfizer-BioNTech vaccine. The head of the intensive care unit at Rafik Hariri University Hospital, the main front-line facility confronting the pandemic, received Lebanon’s first inoculation on Sunday. He was followed by Salah Tizani, a famous...