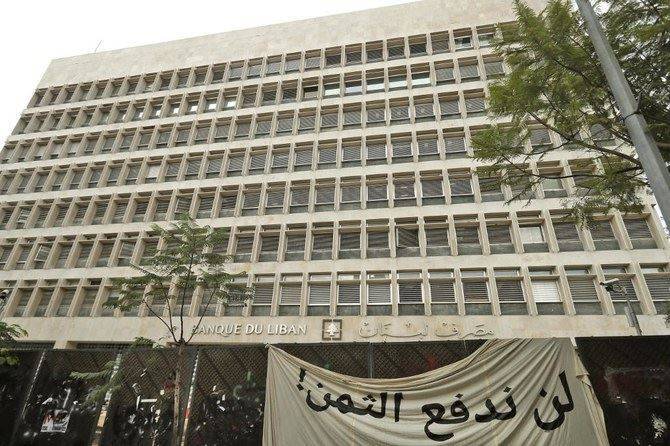 "We will not foot the bill" says a banner hung by protesters outside the central bank in Beirut in 2020. (Credit: AFP)

On Dec. 21, 2020, and after much moral turpitude, Parliament voted in favor of a law allowing a forensic audit of the accounts of Banque du Liban, Lebanon’s central bank, and those of public institutions.

This law was absolutely not necessary: banking secrecy, behind which BDL had hidden in its refusal to hand over certain documents to the audit firm, was nothing but a pretext to torpedo the operation.

Yet, in Lebanon, we have become accustomed to passing laws allowing the enforcement of already existing laws, well aware that the system will enforce neither the original laws nor those derived from them.

This law was hailed as a real breakthrough in the crisis. Could it get any more cynical than this? Once more, this step was said to be in line with the people’s demands, only to better fool them.

The law allows the lifting of banking secrecy on central bank accounts for one year, with the audit company being the sole party to have access to information on these accounts. The law contains no provision guaranteeing that any findings would be made public at a later stage.

In light of the delays in cabinet formation, negotiations on the terms of a new contract and calls for tenders to recruit a new audit firm, things are clearly heading back to Parliament in a few months, to square one.

What’s more, the need for such a law sets a precedent, as if it was needed, which is scandalous. This is not to mention that the legal text is somewhat ambiguous on some information, particularly on bank accounts.

BDL Gov. Riad Salameh said he handed over all of his institution’s accounts to the audit firm Alvarez & Marsal.

But then, in which category, does the “financial engineering,” on which no information has been provided, fall? And since the lifting of banking secrecy would be strictly limited to the audit firm, which party would process the information at a later stage, or even make use of the findings for possible prosecution?

A part of official Lebanon wanted the audit. Into the home stretch of the marathon between a few reformers and men of the system, we proposed a plan, where the forensic audit was mentioned three times, to end the crisis via the previous government.

The plunderers thus joined forces and mobilized their financial, political and media war machine in a bid to sabotage what was essential to the government plan, to the reforms and to the IMF program (which, with the international community, very strongly endorsed the government plan and raised concerns about the catastrophic fallout should it be sabotaged).

These predators wanted to preserve all their gains and make the citizens bear the brunt of the system’s colossal losses, through the depreciation of the currency and inflation (an eminently regressive “tax”), currently at 120 percent, and by draining off indiscriminately — via the “lirification” of deposits among other ways — the total of deposits, starting with those of the less well off. This is particularly true while the government plan provided for a “bail-in” only for very large deposits.

Thus, the people are being dispossessed of their funds by the powerful.

Another point of the plan sparked hysteria: recovering ill-gotten funds and correcting the effects of “financial engineering” — those billions of dollars that benefited individuals and non-banking companies on top of banks.

And since it was impossible, in light of the banking secrecy, to know who benefited from what, the forensic audit was essential.

As mentioned in the plan, this audit was requested by the president of the republic and approved by the government, as well as expected by the international community, especially since French President Emmanuel Macron described BDL’s operations as a “Ponzi scheme.”

So, the pertinent question is, how did this end up being a complete farce?

The definition of audit in the French Larousse dictionary is “the process of ensuring that an organization’s accounts are complete, true and in order, vouching for their veracity before various concerned parties, and more generally to inspect the quality and thoroughness of the company’s management.”

In our case, every word is problematic. Let us start with “ensuring that an organization’s accounts are complete, true and in order.” Upon my arrival to the Directorate-General of Finance, I discovered that things were strange and inconceivable, as the treasury accounts were not in order, largely incomplete, poorly documented or not documented at all, marred by colossal errors, and presented without the slightest truthfulness, and accepted as they are.

My teams worked relentlessly for years to piece together these accounts that span a period of 28 years.

Several foreign experts told us that it was mission impossible given the catastrophic state of the accounts and the politicians’ relentlessness in wanting to sabotage this mission, while it was essential to restore the confidence of citizens and the international community.

We faced condemnation, threats, proposals for amnesty laws and punitive measures against officials. In short, the system did not want reconstituted treasury accounts, let alone a forensic audit of the central bank that would irrefutably determine responsibilities.

Furthermore, regarding the part of “vouching for their veracity before various concerned parties,” our team did indeed do so before the ministers, Parliament (since 2008), a delighted international community, as well as before our fellow citizens through the press conferences that I held between 2014 and 2018.

The financial accounts, however, were never placed on the agenda of the cabinet, and Parliament did not pass account closure laws, despite the usual political posturing.

Finally, let’s look at “to inspect the quality and thoroughness of the company’s management.” Governmental action is mainly supervised through two channels: by the people via Parliament and by the judiciary via the Court of Audit.

The latter, undermined by clan politics, was kept with a minimum workforce for a very long time. As for Parliament, it is a partner of the government rather than its censor.

So which party seeks a serious audit of the public institutions? In case of alternation in power, the newcomers seek to denounce and correct the acts of their predecessors. This means that the implicated administration has to act in good faith. But how could one fathom that these clans would possibly reveal their fraudulent, even criminal practices? What reason would they have to discredit the system that keeps them jointly in power?

The clans claim to want an audit while burying it at the same. One ought to mention what happened with the US firm Kroll, a top forensic auditor, which was named to handle the audit only to be dismissed following reports of its alleged presence in Israel (but isn’t it like all audit firms in the world, including those auditing BDL?).

Better yet, another name was proposed: FTI, which has an entire office in Israel and a promotion agreement with BDL. In terms of conflicts of interest, things could not be better. But before the scandal erupted, FTI declined the task.

After losing precious months, Alvarez & Marsal was chosen. Then the forensic audit was torpedoed as was the case before that with the capital control and the government plan as a result of ludicrous political posturing at the hands of the same petty stooges.

It was argued that public money was subject to banking secrecy vis-à-vis the state, its owner.

The Alvarez team was also required to be physically present at the BDL in order to have access to the data (does banking secrecy entail physical presence at a particular site?), while the firm was denied an office there.

Later came the usual interventions on the part of parliamentarians: we need a law, they assured. Parliament, however, did not vote for a law but instead issued a decision with no effect.

As was the case with the text on capital controls — which circulated for 18 months between BDL, the executive and the parliamentary budget and finance committee, causing the drainage of deposits to continue — a serious forensic audit would not see the light of day in the shadow of this system, despite the unnecessary law of Dec. 21.

The political elite made the crisis systematic and the isolated measures became unnecessary, assuming they were feasible.

And if all the ruses were exhausted and the audit ended up being carried out, no tangible action would follow, just like all the other shelved cases awaiting implementation by the administration.

But instead of wasting time imagining those who orchestrated the looting of an entire people to have transparent practices all of a sudden, let us push them out.

This is inevitable if we want the system to engender counter-powers and safeguards.

In the meantime, a question arises: What further use is there for banking secrecy, which was introduced in the past when lawlessness governed the countries of our region and Lebanon was a haven of justice?

As a result of the negotiations that I conducted with the Global Forum on Transparency and Exchange of Information for Tax Purposes, banking secrecy was eliminated for nonresidents (against the will of our elites). Parliament has yet to get rid of the banking secrecy for residents, which only serves offenders to circumvent the laws, to obtain illicit favors, while the majority of depositors are dispossessed of their funds with the obvious complicity of authorities, and to avoid paying their tax contributions.

This could be a start.

Alain Bifani was the director-general of finance from 2000 until his resignation last year. His most recent book is Destructuration (L’Harmattan, Saër al-Mashrek, 2020). This article was originally published in French in L’Orient-Le Jour. Translation by Sahar Ghoussoub.

On Dec. 21, 2020, and after much moral turpitude, Parliament voted in favor of a law allowing a forensic audit of the accounts of Banque du Liban, Lebanon’s central bank, and those of public institutions.This law was absolutely not necessary: banking secrecy, behind which BDL had hidden in its refusal to hand over certain documents to the audit firm, was nothing but a pretext to torpedo the...