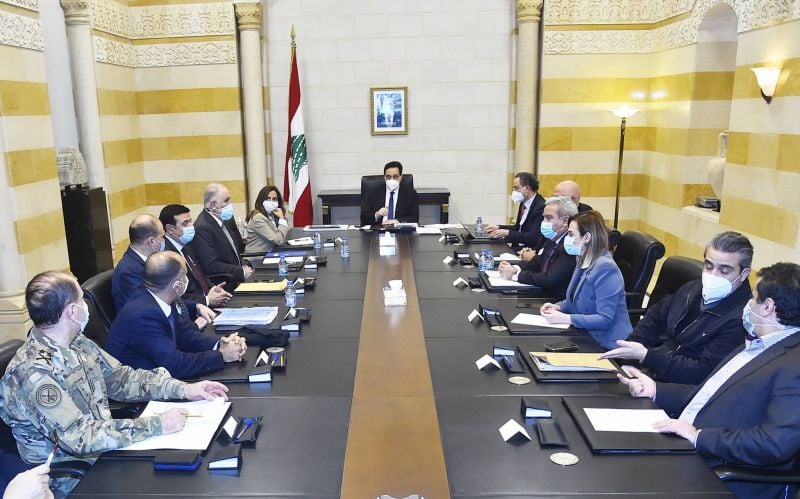 The reopening of the country and its sectors is set to follow a four-phase plan, with each phase lasting for a period of two weeks until the end of March.

Outgoing Prime Minister Hassan Diab, ahead of Friday’s COVID-19 ministerial committee meeting to decide on lockdown measures, warned that Monday “will not be a normal day,” as some restrictions will remain in place. “We will partially open the country and continue to implement strict measures,” Diab said.

The round-the-clock curfew — Lebanon’s most strict COVID-19 measure to date — will remain in effect during the first two-week phase and residents will continue to be required to get a permit from the Impact mobile application or via SMS to leave their homes.

Grocery stores, which for the last three weeks of the 24-hour lockdown have provided delivery-only services, will reopen for in-store customers providing they abide by safety regulations and seek a permit from the Impact platform.

Public transport drivers, many of whom depend on daily earnings to make a living, held multiple protests during the lockdown to protest their exclusion from a list of curfew exemptions.

The head of the North Lebanon Public Transport Drivers’ Syndicate, Shadi al-Sayed, welcomed the decision Saturday, reminding drivers in a statement to comply with precautionary measures to “protect themselves, their families and their passengers.”

Factories, the majority of which have been closed during the current lockdown, will gradually begin reopening according to necessity. During phase 1, producers of medical supplies, agricultural equipment and food products will be allowed to operate, with remaining factories opening during phases 2 and 3 according to priorities set by the Industry Ministry.

Industrialists had criticized the ban on operations for damaging a vital pillar of Lebanon’s economy.

Schools will remain closed at least through phase 1 as the Education and Health ministries work out a plan to reopen. Restaurants, beaches, sports clubs and most other entertainment venues will not reopen until the fourth phase, at which point gatherings and religious celebrations will also be permitted.

The unprecedented 24-hour lockdown, which was implemented Jan. 11, was initially set to be relaxed on Jan. 25 but was extended until Feb. 8 to curb the most dangerous wave of coronavirus infections Lebanon has witnessed to date. The surge has been blamed on officials’ decision to lift most lockdown measures over the Christmas and New Year’s holiday period.

Record-breaking deaths on Tuesday and Wednesday amounted to a total of 170 fatalities in 48 hours. There have been a total of 3,495 deaths since the virus was first detected in Lebanon nearly one year ago.

Over the last two weeks, 24 percent of locally conducted PCR tests have come back positive, suggesting that the spread of the coronavirus is larger than case counts suggest.

Caretaker Health Minister Hamad Hassan said that over the next few weeks, his ministry would aim to ramp up COVID-19 testing via nationwide field testing campaigns.

“Easing the lockdown before achieving a further reduction in transmission will only result in a rebound effect,” Abiad said in a tweet. “The economy and people will find themselves facing the prospect of another long strict lockdown. Better extend further now, and cement our gains, than risk it all.”

As lockdown restrictions ease, attention will turn to the vaccination campaign, with the first doses of COVID-19 vaccines set to begin arriving in just over a week from US pharmaceutical company Pfizer.

Further doses from Europe’s AstraZeneca will start arriving in early March, according Abdul Rahman Bizri, the head of the national vaccine committee.

On Friday, the committee approved the emergency use of the Russian Sputnik V vaccine, with some 200,000 doses promised by the Russian Embassy, Bizri said.

Initially dismissed by scientists around the world for being rolled out before the completion of full clinical trials, British medical journal The Lancet announced earlier this week that the Sputnik V vaccine was found to give 92 percent protection against COVID-19.

A fourth vaccine, China’s Sinopharm, will be reviewed by the committee next week, Hassan said.

BEIRUT — Lebanon’s COVID-19 ministerial committee agreed to begin easing stringent lockdown restrictions starting Monday as a record number of 98 coronavirus deaths was registered by the Health Ministry on Friday.The reopening of the country and its sectors is set to follow a four-phase plan, with each phase lasting for a period of two weeks until the end of March.Outgoing Prime Minister...

Salameh investigated, Hariri heads to Moscow, Military Tribunal to try protesters: Everything you need to know to start your Wednesday