In the face of Tripoli’s anger, Sunni leaders are confronting a community at unease 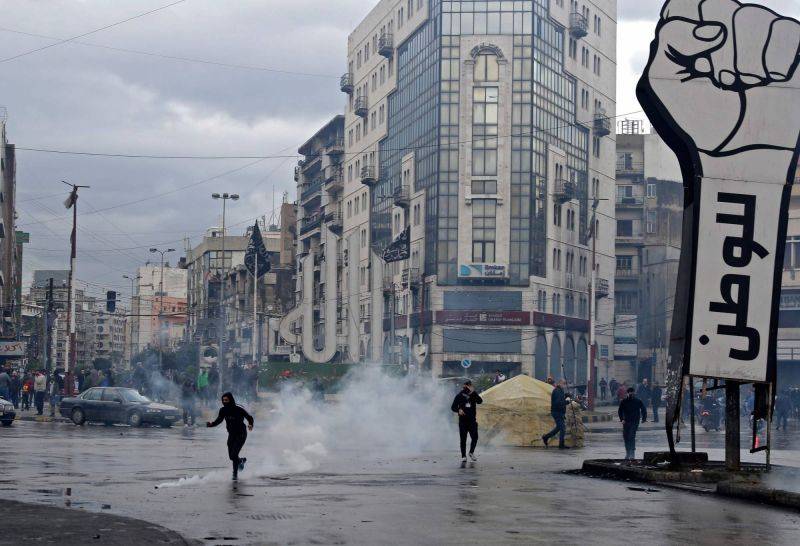 Tripoli has been rocked by protests sparked by the government’s failure to provide assistance during the COVID-19 lockdown. (Credit: Joseph Eid/AFP)

Hariri has cause for concern. While he appears to be failing to win the showdown with President Michel Aoun over the formation of a cabinet, he finds himself facing the fierce anger of the Sunni street, which he clearly can no longer contain, especially in Tripoli.

The protests against rising poverty amid a countrywide lockdown have rocked the large northern city for over a week and are the latest addition to a list of developments in recent years that have played a role in undermining Hariri’s leadership, which is contested, even within the Hariri family itself by no other than the prime minister-designate’s brother Bahaa.

Within Hariri’s political party, the Future Movement, the social explosion is no surprise, as the poverty rate hits record levels in Tripoli, and no one appears willing to take responsibility.

More importantly, there have been talks that some parties are exploiting the suffering of the population to settle political and security scores.

“This is not the first time that someone has tried to turn Tripoli into an arena to settle local and even regional scores, and to portray the city as a stronghold of Sunni extremism,” says a close associate of Hariri.

According to the source, the prime minister-designate swiftly called for the violence to be contained, after consulting with security apparatuses and the city’s dignitaries, in order to block the way for several parties who seek to start a battle within the Sunni community.

“These disturbances are a new attempt to target [Hariri], by stirring up the streets of his own community under the pretext that Sunnis are deprived of leadership or a regional godfather,” the source adds, without providing any evidence of his statements.

The protests continued Sunday and Monday, as anger in the streets was further exacerbated by the army’s repressive response, which resulted in the death of a protester on Jan. 27.

On Thursday, protests took yet a more violent turn, and several buildings in the city were set on fire or ransacked, including the historical city hall, the government serail building and the Sunni religious court.

In a country where spontaneous protests continue to be questioned by the entire political class, the source close to the head of the Future Movement accuses Hezbollah of having attempted on several occasions to infiltrate the Sunni street, notably by financing the resistance brigades (Saraya al-Mouqawama), which bring together supporters of the Shiite party from different sects.

For his part, Ahmad Fatfat, a former MP for the Future Movement, rejects “any conspiracy theory” as he admits that the protests are driven by hunger. He, however, says that “other parties have entered the game and are trying to politically take advantage of the disturbances to undermine Hariri in the city” — a reading of the situation that appears to be shared by a large part of the Sunni leadership.

“The scenes in Tripoli are the consequences of an existential crisis linked to the Iranian plot which, through Hezbollah, seeks to strong-arm Sunnis after having succeeded in controlling a large part of the Christian community via [Hezbollah’s] alliance with Michel Aoun,” says Ashraf Rifi, a former justice minister and former director-general of the Internal Security Forces who is known for his criticism of Hariri.

In the same vein, former Prime Minister Najib Mikati believes that “it is clear that certain parties are inciting people to take to the streets to make political gains.”

In this regard, he questions the role of the security forces, which he says must protect the city, adding that “now is not the time [to settle] political [scores].” On Friday, Mikati went as far as to threaten that he might have to arm himself.

“If the army is not able to protect us, we will have to take up arms to protect ourselves,” he said.

The accusations aiming to blame political adversaries for the anger in the streets reflect the great unease within the Sunni community, which is experiencing a serious political identity crisis. And while several of its political leaders are vying for leadership, Sunnis appear to lack a project at the national level and no longer enjoy regional support or financial aid.

In a sectarian system where the prime minister must be Sunni, Hariri has been forced for years to make concessions to the powerful Hezbollah.

Since first being appointed prime minister in 2009, Hariri has led three governments and has gradually acquired a reputation as a man of compromise. He is the man without whom the presidential compromise of 2016 would not have happened: at the end of October of that year, with the support of Hariri (and that of the Lebanese Forces), the founder of the Free Patriotic Movement, Michel Aoun, was elected president and, days later, Hariri was appointed prime minister.

Hariri’s political choices in 2016 were strongly criticized within his community and undoubtedly contributed to causing the prime minister to lose part of his influence in recent years.

The comedown began in 2016 when the list of traditional parties supported by Hariri was defeated by civil society groups supported by resigned Justice Minister Ashraf Rifi in municipal elections in Tripoli.

Then came the legislative elections of May 6, 2018, when the Future Movement lost a third of its seats in Parliament, notably due to a change in the voting system.

“We had bet on a better result and a larger block,” Hariri admitted at a press conference at the time.

In 2019 during the unprecedented popular uprising against the political class, Hariri fell from grace and was forced to step down, only to present himself, one year later, as the “natural candidate” for the premiership.

With this decision, “Saad Hariri missed a golden opportunity to turn the page on compromises, paving the way for more political bargaining,” Rifi says.

“The Sunni community must reassume its national identity and work to strengthen the state instead of drowning in the twists and turns of personal accounts and deepening internal divisions that will only weaken the community even more,” says a relative of former Prime Minister Fuad Siniora.

The latter recently launched an initiative to try to contain the repercussions of the events in Tripoli, according to the aforementioned source.

Siniora, who is a prominent figure in the Future Movement, wishes to reaffirm the need to preserve the Taif Accord and to block, with the help of certain Christian political forces, any attempt to amend the constitution, which would change the political face of the country.

This article was originally published in French by L’Orient-Le Jour. Translation by Sahar Ghoussoub.

Hariri has cause for concern. While he appears to be failing to win the showdown with President Michel Aoun over the formation of a cabinet, he finds himself facing the fierce anger of the Sunni street, which he clearly can no longer contain, especially in Tripoli.The protests against rising poverty amid a countrywide lockdown have rocked the large northern city for over a week and are the...