Parliament endorses the audit of the central bank — but not in a legally significant way, experts say 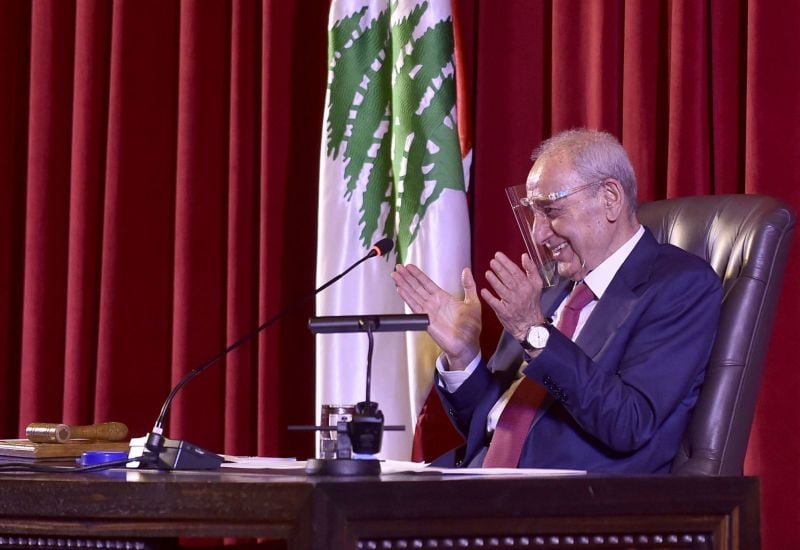 BEIRUT — At the end of Friday’s session of Parliament, Speaker Nabih Berri heralded MPs for agreeing to take a decision in favor of auditing the central bank and other state institutions — appearing to offer a conclusion to an issue that has roiled Lebanon’s political and financial elite over the past month.

But legal experts say the legislature’s action has no legal value.

“It’s just a political decision, not a legal one,” said Nizar Saghieh, the executive director of Legal Agenda, adding that the move “has no effect.”

Following a little under two hours of talks and a perfunctory vote of raised hands, Berri announced Parliament had agreed — in response to a letter sent from President Michel Aoun earlier in the week — that the accounts of Banque du Liban and other public bodies should be unencumbered by any obstacles, including the banking secrecy law.

The forensic audit of the central bank ran into trouble when BDL Gov. Riad Salameh refused to turn over documents to auditor Alvarez & Marsal by this month’s deadline, citing supposed legal constraints. Top officials agreed to a three-month extension, but even that failed when the firm pulled out last week — setting the stage for a fight amid rising public anger over the catastrophic collapse of the country’s financial system, which took with it many people’s life savings.

While the speaker dubbed Parliament’s move in favor of an audit a “decision,” Rizk Zgheib, a senior lecturer at the Faculty of Law and Political Science at St. Joseph University (USJ), said it was merely a recommendation with no legal standing.

“This is not a new, binding decision to oblige Riad Salameh to do what he thinks he cannot do,” Zgheib said, in reference to the BDL governor’s refusal to hand over documents to auditors.

“It’s not a law,” Wissam Lahham, a lecturer at USJ, told L’Orient Today, calling it instead “political propaganda.”

Lahham added that the text of Parliament’s resolution will not be published in the Official Gazette nor can it be invoked in front of any court. “It’s something for the media, to fool people, to say look, we are serious.”

Prior to Parliament’s vote, representatives for each political bloc took turns addressing the assembly.

Speaking for Berri’s Amal bloc, MP and former Finance Minister Ali Hassan Khalil said, “Our position is that there should be no cover for anyone, no secrecy, no shield for those who stole or wasted public funds, and there should not be any prohibitions” on conducting a forensic audit of state institutions.

MP Ibrahim Kanaan (FPM/Metn) called on “honorable colleagues to take an exceptional position that secures the right to know the fate of deposits. Perhaps depositors will know who actually benefited and stole their bank deposits.”

Salameh — who has headed the central bank since Aug. 1, 1993, less than a year after Berri became Parliament speaker — was not immune from censure. MPs George Adwan (LF/Chouf), Jamil al-Sayyed (Ind./Baalbeck-Hermel), Fouad Makhzoumi (Ind./Beirut II) and Salim Saadeh (SSNP/Koura) severely criticized the governor during the session.

Makhzoumi, a wealthy business tycoon, questioned whether the governor considers himself above the law, while Sayyed asked lawmakers, “Is the governor of Banque du Liban a god?”

Wazni objected but was not allowed to speak.

In the hours after the session, some MPs patted themselves on the back. Khalil said the move showed “our determination to complete the audit.”

MP Gebran Bassil (FPM/Batroun) tried to dress up the vote, tweeting that the Lebanese people had achieved a victory “thanks to the president” — who is also his father-in-law — while arguing that the decision gave cover for disclosing documents for a forensic audit.

Others were less triumphant. MP Alain Aoun (FPM/Baabda) told L’Orient Today that Parliament’s decision gives “strong grounds but does not have the value of a law.”

“This decision won’t solve all our problems,” the president’s nephew added, noting that the central bank governor can still refuse to comply by citing the banking secrecy law and the law regulating the central bank.

MP Yassine Jaber (Amal bloc/Nabatieh) called the vote a “great declaration,” but added it doesn’t completely solve the issue of conducting a forensic audit since “in Lebanon, the problem has always been about execution.”

USJ’s Lahham explained that Friday’s vote was legally just a response to the president’s letter calling on the legislature to enable the state to conduct forensic audits on the central bank and public institutions.

“If Parliament wanted to act, it could have passed a law,” Lahham said, pointing out that the legislature did just that after its session on the audit when it passed a draft law to grant families of the victims of the Aug. 4 Beirut explosion the same benefits as families of soldiers killed in the line of duty.

“They could have voted for another law that Banque du Liban is obliged to cooperate with an audit, but they didn’t do so.”

BEIRUT — At the end of Friday’s session of Parliament, Speaker Nabih Berri heralded MPs for agreeing to take a decision in favor of auditing the central bank and other state institutions — appearing to offer a conclusion to an issue that has roiled Lebanon’s political and financial elite over the past month.But legal experts say the legislature’s action has no legal value.“It’s...

Hospitals at capacity, mounting deaths, winter storm: Everything you need to know to start your Monday

Dangerous liaisons: How the ‘system’ got the better of the ‘technocrats’ — part II of II

Emergency vaccine vote, hospitals overwhelmed, storms ahead: Everything you need to know to start your Friday