The UN Security Council is expected to vote on August 31 on renewing the mandate of the in-ternational force. 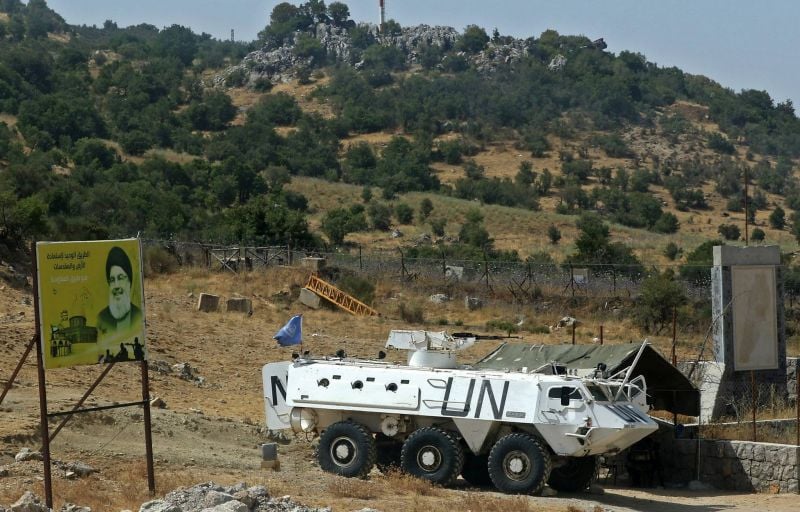 A UNIFIL tank next to a portrait of Hezbollah Secretary General Hassan Nasrallah on patrol in the border village of Shebaa in southern Lebanon, on July 28, 2020.Mahmoud Zayyat/AFP

Beyond the showdown on the ground between Hezbollah and Israel on Monday July 27 in the border area of southern Lebanon, the escalation has brought to light the thorny issue of renew-ing the mandate of the UN Interim Force in Lebanon (UNIFIL). The UN Security Council is sched-uled to meet on August 31 to vote for extending the peacekeepers' mandate. Modifying UNIFIL mission, as Washington and Tel Aviv in particular desire, seems to be excluded, at least for the time being.

The recent escalation in southern Lebanon should certainly be addressed in terms of its timing. It happened at a time when both the United States and Israel are lobbying for modifying the mission of the UN force so as to have more prerogatives to intervene on the ground and, among other things, ensure that the border strip remains an unarmed zone. Washington wants the UNIFIL presence in southern Lebanon to be more efficient while Israeli Ambassador to the United Nations Danny Danon expressed his country's desire during a video conference in May to see UNIFIL soldiers "access all sites and allowed to move more freely.” In early June, US Am-bassador to the UN Kelly Craft denounced on her Twitter account the fact that "the UNIFIL (is) prevented from fulfilling its mandate" and that Hezbollah "continues to arm itself."

During the same period, US Ambassador to Lebanon Dorothy Shea expressed her country's sup-port for a possible change in UNIFIL's mission. At a meeting on June 3 between Lebanese Presi-dent Michel Aoun and the ambassadors of the permanent members of the UN Security Council (the United States, China, Russia, France and Britain), Shea bluntly said: "The peacekeepers are present in Lebanon to ensure the implementation of (UN Security Council) Resolution 1701 (which has maintained calm in southern Lebanon since the end of the 2006 conflict). But I be-lieve it is not being applied in its entirety. We need to think about improving UNIFIL's efficiency. And if it fails to implement its mandate, questions must be asked about its effectiveness."

Shea's statements were interpreted as a continuation of Washington's push to deploy the UNIFIL to the Lebanese-Syrian borders. Such a move, according to the United States and more general-ly to the international community, is meant (to attempt) to neutralize arms trafficking from Syr-ia for the benefit of Hassan Nasrallah's party.

But the Lebanese authorities do not seem to see it this way, with Beirut maintaining its tradi-tional official position: Lebanon is committed to a renewal of the UNIFIL mission, without any changes, neither in status nor in the number of its soldiers.

With Lebanon insisting on keeping the mission of the peacekeepers as is, political sources told L'Orient-Le Jour that the amendments required by some countries, such as granting UN sol-diers the opportunity to search residents' homes and their lands, are "dangerous" for they may undermine the stability of civil peace in southern Lebanon. The Lebanese authorities will thus continue to advocate for maintaining UNIFIL mission and size as defined by Resolution 1701. They will also emphasize that any change in the mandate of the peacekeeping force requires a new Security Council resolution, an option excluded for the time being in view, of course, of the Russian and Chinese double veto that such a resolution may face.

Clearly, this means that Beirut sees no impact of the recent escalation on the status quo in southern Lebanon, especially since it was, as a ministerial source said, a "symmetrical escala-tion" as part of the showdown between Tel Aviv and Hezbollah.

On another note, excluding the option of a new Security Council resolution would mean ruling out the possibility of deploying the peacekeepers along the Lebanese-Syrian borders, as de-manded by some local protagonists in order to combat smuggling, pending the closure of illegal crossing points. As for Hezbollah, it rejects, unsurprisingly, all calls to broaden the UNIFIL scope to include the borders with Syria. Contacted by L'OLJ, Mohammad Fneich, a former minister and senior Hezbollah official, is adamant: "We oppose any attempt to amend the status of the UNIFIL, despite all the pressure that the Americans may exert."

However, for the time being, the United States remains vague about its position in the Security Council, as the UNIFIL issue is still subject to bargaining and political negotiations. A source close to the US Embassy tersely reiterated to L'OLJ the US commitment to negotiations con-cerning the UNIFIL's mandate. "We want to see the UN force fulfill its mandate, and we opt for a review to identify the shortcomings that are jeopardizing its operations," the source said. The source did not hide US "deep concerns" about "Hezbollah's violations of Resolution 1701." These violations pave the way for "a rearmament (of the Shiite faction), and this is the main obstacle to the free action of the peacekeepers," according to the same source." It is crucial to face the threat posed by the rearmament of Hezbollah and to work so that the Lebanese authorities ex-ercise their sovereignty over the entire Lebanese territories."

This hardening of tone should lead, according to political sources, to an increase in US pres-sures on Lebanon on the eve of the US presidential election, scheduled to take place in Novem-ber. An affair to follow...

Beyond the showdown on the ground between Hezbollah and Israel on Monday July 27 in the border area of southern Lebanon, the escalation has brought to light the thorny issue of renew-ing the mandate of the UN Interim Force in Lebanon (UNIFIL). The UN Security Council is sched-uled to meet on August 31 to vote for extending the peacekeepers' mandate. Modifying UNIFIL mission, as Washington and...