Could Tarek Bitar be stopped in his tracks again?

The lead investigator will remain in his post as there are no obvious legal grounds for his removal, but he will not really be able to implement his decisions and conduct the necessary legal proceedings, experts say. 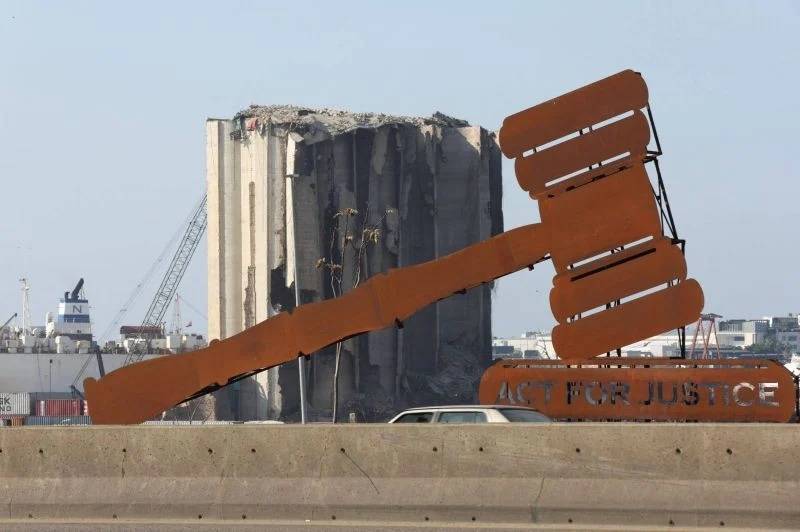 A sculpture showing the symbol of justice stands in front of the Port of Beirut, ravaged by the Aug. 4, 2020 explosion. (Credit: Mohamed Azakir/Reuters)

Beirut port blast investigation head Judge Tarek Bitar’s decision on Monday to resume the probe into the 2020 explosion, which he was forced to suspend for over a year due to unresolved dismissal requests filed against him by politicians implicated in the case, has unleashed major controversy.

While Bitar revitalized the case by immediately ordering the release of five detainees, he also launched an offensive by initiating proceedings against a number of political, security, administrative and judicial heavyweights. Public Prosecutor at the Court of Cassation Ghassan Oueidat, having expressed his disagreement with Bitar's move on Tuesday, counterattacked on Wednesday by ordering the release of all detainees in the investigation and initiating charges against Bitar for "rebelling against the judiciary." Oueidat also slapped Bitar with a travel ban.

In the sights of political and judicial powers

Will Bitar be able to remain in his position, or will he be removed once and for all by the political and judicial authorities who have been relentlessly trying to bring his probe to a halt?

Will he be able to enforce his decisions?

According to Reuters, Oueidat said on Tuesday, after Bitar’s announcement restarting the probe, that the investigation remains suspended.

“We learned of the return of Judge Bitar through the press. Since he considers the prosecution as non-existent, we also consider [his return] as non-existent,” Oueidat also told AFP.

However, according to former Prosecutor-General Hatem Madi, Oueidat “does not have the power to challenge the investigative judge’s decision” at the Court of Justice, which is a special court.

“The law does not specify which court would be competent to consider such an appeal,” he told L’Orient-Le Jour.

Oueidat sent two letters to Bitar on Tuesday. One of the missives quotes a Quranic verse, saying that “mortals must be just.” The other contains a passage from the Gospel, followed by a note in which he relays a message that Bitar cannot resume the case as long as there is no decision regarding the dismissal appeals filed against him.

According to local media news, Oueidat also reportedly decided to order security services not to notify the persons concerned of their interrogation sessions.

But, both judges and lawyers agree that removing Bitar may not be as easy as one might think; however, at the same time, they believe that even though he has restarted the case, it will be difficult for him to go through with his investigation.

Paul Morcos, a lawyer and director of Justicia, a law firm, explained that Bitar was able to resume his work because “there is no law providing for his recusal.”

“The scope of recusals that can target ordinary courts’ judges through judicial appeals does not extend to the investigating judge at the Court of Justice, [which is an extraordinary court],” he said, arguing that “it is necessary to interpret restrictively the laws of criminal procedure.”

Can the Higher Judicial Council or Justice Minister Henri Khoury decide to dismiss Bitar, since he was appointed during a cabinet session on the proposal of former Justice Minister Marie-Claude Najm, after the council’s approval?

“They cannot remove him because they do not have the prerogative to decide on the way a judge manages their own case,” Morcos explained.

“In any case, the quorum required [six] for a Higher Judicial Council meeting to discuss Bitar’s dismissal could not be reached,” a magistrate told L’Orient-Le Jour on condition of anonymity, noting that “neither the head of the Higher Judicial Council Souheil Abboud, who is in favor of the case being resumed, nor the Court of Cassation prosecutor, who is the respondent in the case, would participate in such a meeting.”

Legally composed of 10 members, the Higher Judicial Council currently has only seven.

‘The main thing is to solve this historic crime’

Can the government remove the investigative judge?

“Being in caretaker mode, the government does not have the competence to address issues of recusal or appointment,” Morcos said, stating that “even if the government had full powers, it is not competent to revoke a working judge.”

Joseph Samaha, a former member, and former interim president, of the Court of Justice explained that based on the “separation of powers principle,” the government cannot encroach on the judiciary and settle the matter.

“This would be seen as interference in the judicial process,” he said.

For him, Bitar should not be sanctioned over his decision to restart the investigation.

“This is not a [legal] mistake, but a reasoned legal opinion,” Samaha said.

Madi does not concur: “Bitar’s decision to resume the investigation is illegal because his hands are tied over the legal proceedings filed against him.”

But Said Malek, a constitution expert, told L’Orient-Le Jour that “regardless of the means, the main thing is to solve this historic crime,” noting that “the need to see justice served is more important than whether or not Bitar’s decision has legal grounds or not.”

But for Samaha, “Faced with an impasse on all fronts, Bitar had no other choice but to take this decision.”

Samaha also pointed out the “negative and strange” attitude of the Oueidat’s office toward the port investigation.

“The role of the public prosecutor is to prosecute any suspect in the cases that are submitted to him,” he said, stressing that in this case, “the prosecution did not support Tarek Bitar and was hostile to the measures he took.”

Under these conditions, lawyers highly doubt that Oueidat’s office will agree to execute the proceedings initiated by Bitar by notifying those who were summoned.

“If the public prosecutor really wanted to notify the concerned persons, it would have done so for other decisions issued previously,” Malek said.

Should the top prosecutor fail to notify those summoned to show up at the interrogation, the investigating judge can display notices at the door of his office at the Justice Palace or dispatch them to the addresses of the summoned persons — a means that does not seem to be any more effective in pushing suspects to appear for questioning.

Bitar could ultimately opt for the publication of an indictment, according to Samaha.

"It has been reported that the majority of an indictment arising out of the investigation has already been written, and, according to Samaha, "the missing parts are likely the statements of those summoned."

“If they fail to appear, Judge Bitar could deduce that they are suspects,” Samaha added.

Beirut port blast investigation head Judge Tarek Bitar’s decision on Monday to resume the probe into the 2020 explosion, which he was forced to suspend for over a year due to unresolved dismissal requests filed against him by politicians implicated in the case, has unleashed major controversy.While Bitar revitalized the case by immediately ordering the release of five detainees, he also...