Some experts say it is possible the dollar will double in value against the lira by the end of the year if the status quo continues. 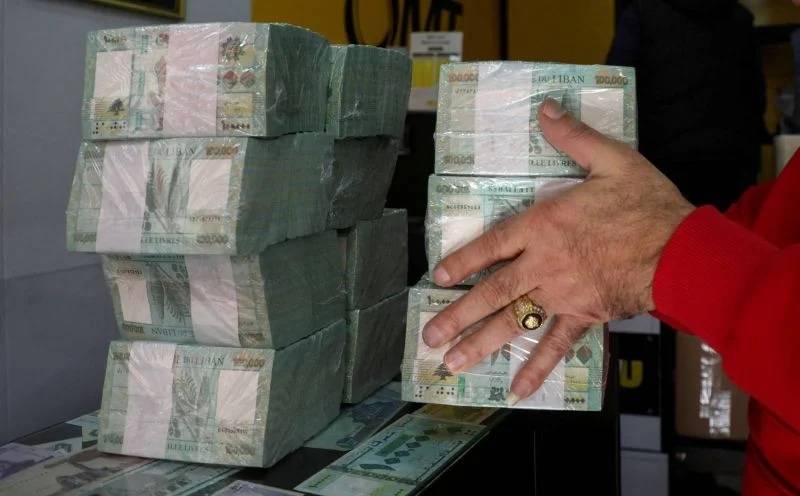 It has been two weeks since Banque Du Liban (BDL) decided to reinstate ceilings to transactions permitted under Circular No. 161, which allows the conversion of Lebanese lira into US dollars at BDL’s Sayrafa platform rate, which is lower than the parallel market rate.

Over this period, the lira’s rate on the parallel market increased from around LL46,000 to the dollar to LL57,000 on Wednesday, a leap of more than LL10,000 in a very short time.

Such major depreciations have become regular since Lebanon’s financial crisis first became apparent in 2019 when the parallel market exchange rate began to noticeably deviate from BDL’s official LL1,507.5 peg to the US dollar.

BDL has on repeated occasions over the past three years succeeded in lowering or slowing the pace of lira’s depreciation, but this time it appears the central bank’s maneuvers have lost their impact. This indicates that the actors of the Lebanese economy seem to have lost all confidence in the ability of the ruling class to tackle the country’s problems, as Marwan Barakat, head of research at Bank Audi, said.

“The recent depreciation of the lira is linked to the lack of confidence amid a presidential vacuum and in the absence of a fully-fledged cabinet, while reforms are at a standstill, which jeopardizes a potential final agreement with the International Monetary Fund,” Barakat told L’Orient-Le Jour.

Barakat also mentioned the “spillover effect” caused by the anticipation that starting Feb. 1 the exchange rate set by BDL for the withdrawal of dollars blocked in the commercial banks via its circulars No. 151 and No. 158 will increase to LL15,000. This measure was announced in November and confirmed last week. The withdrawal rate presently stands at LL8,000.

A financial expert, who declined to be named, referred to a phenomenon known as “market immunity” which has strengthened over time. This immunity is seen in the weakening impact of BDL’s interventions — in January, May, October and December 2022 — on the parallel market rate.

The expert also indicated that, although impressive in nominal value and painful for those paid in Lebanese lira, the magnitude of the recent depreciations must be put into perspective — the lira has already lost more than 95 percent of its value quite some time ago.

Barakat also believes that the exchange rate will remain extremely volatile until Lebanon agrees to an IMF program based on reforms “that would restore the balance” between the respective quantities of lira and dollars.

The international organization pledged in April to release a $3 billion loan over four years to Lebanon, which should boost confidence and investment in Lebanon.

A pill that’s hard to swallow

But Beirut has yet to meet the conditions set to secure the loan, with Lebanese and banking sector leaders apparently choosing instead to attempt to correct the market in their own way.

“If the current political and economic status quo continues throughout 2023, it is likely that the dollar rate will double by the end of the year, resulting in a triple digit inflation rate for the fourth consecutive year (as of the end of December on an annualized basis), thus putting enormous socio-economic pressure on Lebanese households,” Barakat said.

However, and logically, many people are finding this pill increasingly hard to swallow. According to the state-run National News Agency, “young demonstrators” blocked the main road in Chiyah to the south of Beirut in the late morning on Tuesday.

In North Lebanon, the main highway was closed in both directions at the southern entrance to Tripoli, the poorest city in Lebanon.

In South Lebanon, a road was also briefly blocked with burning tires at the Kanaya roundabout, according to our correspondent Mountasser Abdallah.

Lastly, the opacity of the foreign exchange market in an economy that is increasingly dominated by cash offers an opportunity to speculators acting alone or in a coordinated manner, the financial expert said.

“It is not to be excluded in this context that the demand for dollars reported by foreign exchange agents and which currently pushes the rate up is mostly created by actors who bought in mass in order to intervene on the rate in the short and medium term, either to push the rate up, or on the contrary to stabilize it,” he explained, adding that it is surprising that BDL has not yet raised the Sayrafa rate, which remained at LL38,000 to the dollar on Tuesday night.

The imposition of US sanctions on Hassan Moukalled, his sons and his money exchange business, CTEX, which was announced yesterday, may blur the picture even further for those trying to interpret the trajectory of the rate.

In its statement, Washington blamed the businessman for having played a “key role” in allowing Hezbollah “to exploit” the Lebanese crisis.

It has been two weeks since Banque Du Liban (BDL) decided to reinstate ceilings to transactions permitted under Circular No. 161, which allows the conversion of Lebanese lira into US dollars at BDL’s Sayrafa platform rate, which is lower than the parallel market rate.Over this period, the lira’s rate on the parallel market increased from around LL46,000 to the dollar to LL57,000 on...

New record low: Collapsing lira trades at above LL62,000 to the dollar

Why is the manoushe so expensive?

US boosts depleted salaries of Lebanon security forces via UN

Could Lebanon be cut off from the internet?

US sanctions money exchanger for alleged ties to Hezbollah