The caretaker Prime Minister offered assurances that the posts vacated by Gen. Joseph Aoun and Riad Salameh will be filled by "Christian personalities." 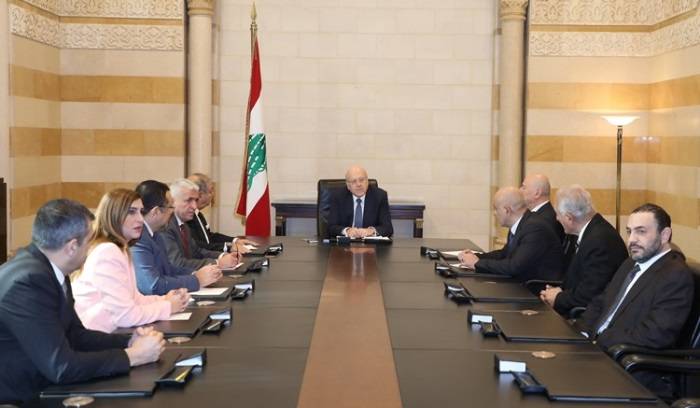 Caretaker Lebanese Prime Minister NaJIb Mikati (c) during a meeting with the council of the journalists' union at the Grand Serail in Beirut, Jan. 23, 2023. (Credit: NNA)

Lebanon was left without a president — a position traditionally held by a Maronite — after Michel Aoun's mandate ended on Oct. 31, 2022. Mikati's caretaker cabinet has been handling government affairs since May 2022.

On Monday, Mikati convened the cabinet to deal with several pressing issues, including electricity, drawing anger from the Free Patriotic Movement. The Christian party accuses him of wanting to arrogate presidential powers to himself.

Posts to be filled by 'Christian personalities'

"Those who speak of an attempt to control the Christian posts are talking in a strange and unfounded way," Mikati said during a meeting with the Council of the Order of Journalists at the Grand Serail in Beirut.

After the meeting on Monday, Mikati acknowledged that Salameh's term ends this July and Gen. Aoun's term ends in early 2024, according to the National News Agency.

Mikati wins another round against Bassil

"I hope that a new president will be elected and that a new government will be formed by then," Mikati said. "The many posts that are vacant will be taken over by Christian personalities."

Command of the army and the leadership of the BDL are two positions reserved for Maronites.

Mikati pointed out that, "according to the Constitution, the cabinet has the competence to decide on what it deems appropriate in its two-thirds majority."

Since the end of Aoun's term, two cabinet sessions have been convened and both were boycotted by ministers close to the Free Patriotic Movement.

How Najib Mikati got into Macron’s good graces

Mikati said that the cabinet "will meet to deal with urgent matters to finish the files still on the agenda, but not incessantly."

The caretaker Prime Minister said the "urgent matters" that must be addressed by the cabinet include: "The strike of public sector schools, which is entering its third week, Lebanon's obligations to the UN and the signing of an agreement for a World Bank grant of $25 million, waste, wheat and others."

"Any solution to the presidential vacancy begins with an agreement among Christians," Mikati added, saying that the solution lies with Parliament.

Parliament has held 11 presidential election sessions, but MPs have thus far failed to elect a president.

BEIRUT — Caretaker Prime Minister Najib Mikati on Monday refuted accusations made ten days ago by Maronite Patriarch Bechara al-Rai, who claimed authorities were trying to usurp high government positions traditionally held by Christians, Mikati called the archbishop's claims "strange and unfounded."Lebanon was left without a president — a position traditionally held by a Maronite — after...