Since September 2020, Parisians and Lebanese expats have enjoyed the famous sandwiches of Malak al-Tawouk, whose first French establishment opened at the foot of Porte Saint-Martin. Its story is one of family, conviviality and a secret marinade. 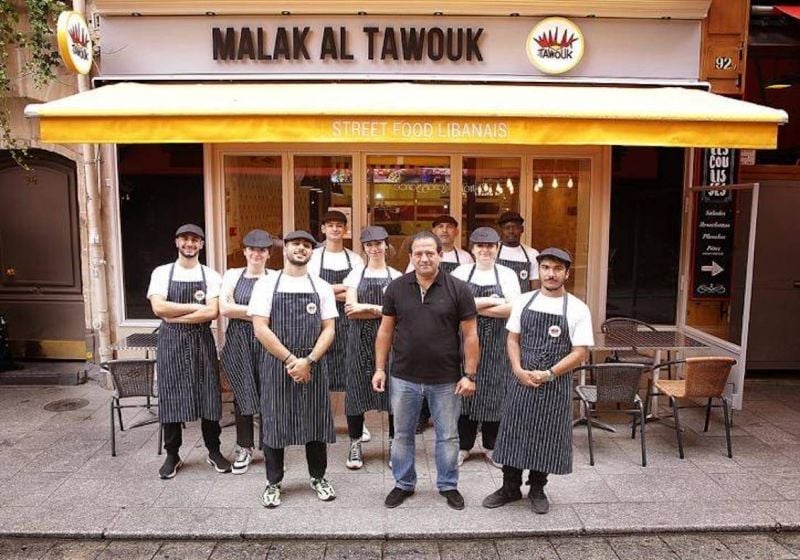 Tarek Mekkaoui, surrounded by the Malak al-Tawouk team in front of his Paris franchise of the signature Lebanese brand. (Credit: DR)

In the René Boulanger side street, a few steps from Paris’ Renaissance theater, a bright yellow facade catches the eye. It is decorated with the orange crest of the famous rooster emblematic of Lebanon’s well-known takeaway restaurant Malak al-Tawouk.

Inside, the decor is exactly the same as in Lebanon.

“We work as a family in our restaurants, with my parents and my brother Timour,” said Tristan Mekkaoui. “In 2021, we opened a Malak al-Tawouk in the 15th arrondissement, which mainly offers take-out. A few weeks ago, [we opened] another one in La Défense.”

“It is our chef, Abed — who trained at the company’s headquarters in Tabarja — who prepares the chicken and sauces in the kitchen on rue René Boulanger,” said Mekkaoui, who still remembers frequenting Malak al-Tawouk when he returned from parties during the summers he spent in Lebanon.

“Our customers are very curious to discover what we offer. The Lebanese community in Paris is large, and word of mouth works very well. Above all, people come back,” he added.

“Our menu is in line with the Lebanese one, but we have added two vegetarian sandwiches because we have a lot of vegan requests. The only sandwich on the Lebanese menu that does not exist in Paris is the Crunchy. In addition, we offer a unique dessert, mouhalabieh, and ice cream with pistachio, rose and achta,” he concluded, just as his father Tarek Mekkaoui, joined the table.

“We get our products from an artisanal ice cream maker of Armenian origin, Hamov,” said the father who, along with his wife Magali Mekkaoui, bought the French franchise of Malak al-Tawouk. “He makes his products on demand. For the achta, we ask for pistachios inside, and orange blossom for the creaminess. The pistachio ice cream follows the Syrian method of preparation. But the product that is most in demand remains the taouk.”

The success of the famous sandwich is reinforced by the quality of the produce available in Paris. “What makes the difference, too, is the marinade,” Tristan Mekkaoui added with a smile. “The recipe, concocted by the owners, the Saadeh brothers, is a secret.”

‘They find a part of Lebanon when coming here’

The elder Mekkaoui is originally from Ras Beirut and his family has a long relationship with France. “My grandfather and my father were shipowners. We are merchants at heart and obtained a license to operate in the port of Beirut from France, during the mandate period. I have lived in France for more than 30 years and my wife is from Burgundy. By opening Malak al-Tawouk in 2020, we took a huge risk, but we were sure that people would be there. Our country is very close to France, so I wanted to establish a Lebanese brand here,” said the owner.

“The first Malak al-Tawouk was inaugurated by the Saadehs in 1996, in Tabarja, in place of a delicatessen transformed into a sandwich shop, offering chicken with garlic cream. Eight years later, they opened a second restaurant in Sin al-Fil, and then awarded franchises.”

Since 2016 the enterprise has boomed. There are “about 50 establishments in Lebanon today, others in Egypt, Jordan, Dubai ... It took us two and a half years to develop everything before opening in Paris,” he said, insisting that the menu is in line with that of Lebanon.

“Our basic produce is French, but the spices for the marinade come exclusively from Lebanon. What is essential for our brand is that its clientele includes all social categories — the most affluent as well as the most modest, the young, the old. It’s real Lebanese street food, and it’s good!” said the restaurateur owner, who boasts his place is always full, with a highly varied clientele. From Asian tourists weighed down with bulky luggage, to families with children and students, all are welcomed with a smile.

“What is most appreciated is the real garlic cream, the tender chicken, marinated differently, and the coleslaw. Our style is not stiff. The customer doesn’t choose his ingredients as he goes along. He tastes the whole sandwich. our Lebanese customers tell us that they find a part of Lebanon when they come to us, even if we have changed some names while keeping the recipe intact,” said Mekkaoui, who recognizes that the current economic situation is a bit difficult in Paris.

“Since the war in Ukraine, the prices of produce have increased a lot: we are experiencing a nearly 30 percent increase,” he said. “We have not changed our prices, but our profitability has been affected. This winter’s cold snap didn’t help, but I’m not worried. Our customers are loyal.”

Malak al-Tawouk just opened in Baghdad and it will soon open in Canada, and in the Ivory Coast — openings all managed by the parent company in Lebanon. Over the next 10 years, numerous international extensions. “Even in Lebanon, as soon as the situation is favorable, I am sure that the brand will continue to develop, certainly with small production units that allow you to eat quality food quickly. In Paris, we have plans to enrich our menu, to offer a Burger Week, to adapt to different events, to prepare taouk-based nuggets.

“Then we are going to open other restaurants in Paris,” he declared. “The next one will be in the 17th arrondissement. We have many requests in the provinces, notably in Lyon, Bordeaux and Marseille. Discussions are underway regarding these projects.”

“I am happy to have taken this Lebanese brand to Paris, and the franchise system protects us. It ensures a certain seniority, which is valuable, because it takes years to set up a business in Paris. Being established in Paris is an excellent showcase for the brand, which establishes its reputation,” said Tarek Mekkaoui, before returning to his customers, tucking into generous trays of Lebanese food. “If a brand works here, it can be exported all over the world. It’s the key to success.”

This story was originally published in French in L'Orient-Le Jour, translated by Joelle Khoury

In the René Boulanger side street, a few steps from Paris’ Renaissance theater, a bright yellow facade catches the eye. It is decorated with the orange crest of the famous rooster emblematic of Lebanon’s well-known takeaway restaurant Malak al-Tawouk.Inside, the decor is exactly the same as in Lebanon.“We work as a family in our restaurants, with my parents and my brother Timour,” said...