Photographer Ieva Saudargaité Douaihi on her relationship to the terrain of Beirut. 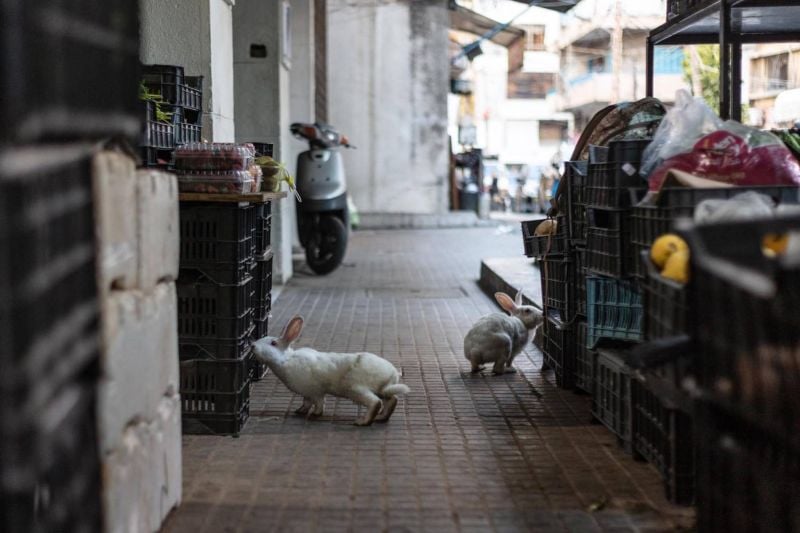 BEIRUT — Denizens of Instagram may have encountered the work of Ieva Saudargaité Douaihi through a portrait series she’s shot of notable Beirut trees. The subject is an intriguing one, since the city — that is to say its property developers and their fellow travelers in decision-making circles — has long been notorious for indifference to urban greenery.

Saudargaité Douaihi attributes her interest in Beirut’s trees, in part, to the Aug. 2020 Beirut Port explosion. She experienced the blast remotely, the global pandemic having stranded her in Vilnius, Lithuania.

“Looking at the images online, I really felt like the city that I knew was wiped out,” Saudargaité Douaihi recalls. “When I returned two months later, I was really afraid to get closer to the blast site. The first time I went was at night. It would be less visible, I felt, less graphic. I didn’t want to photograph it, or anything else.”

Facets of the Lithuanian capital became a lens through which she saw Beirut. 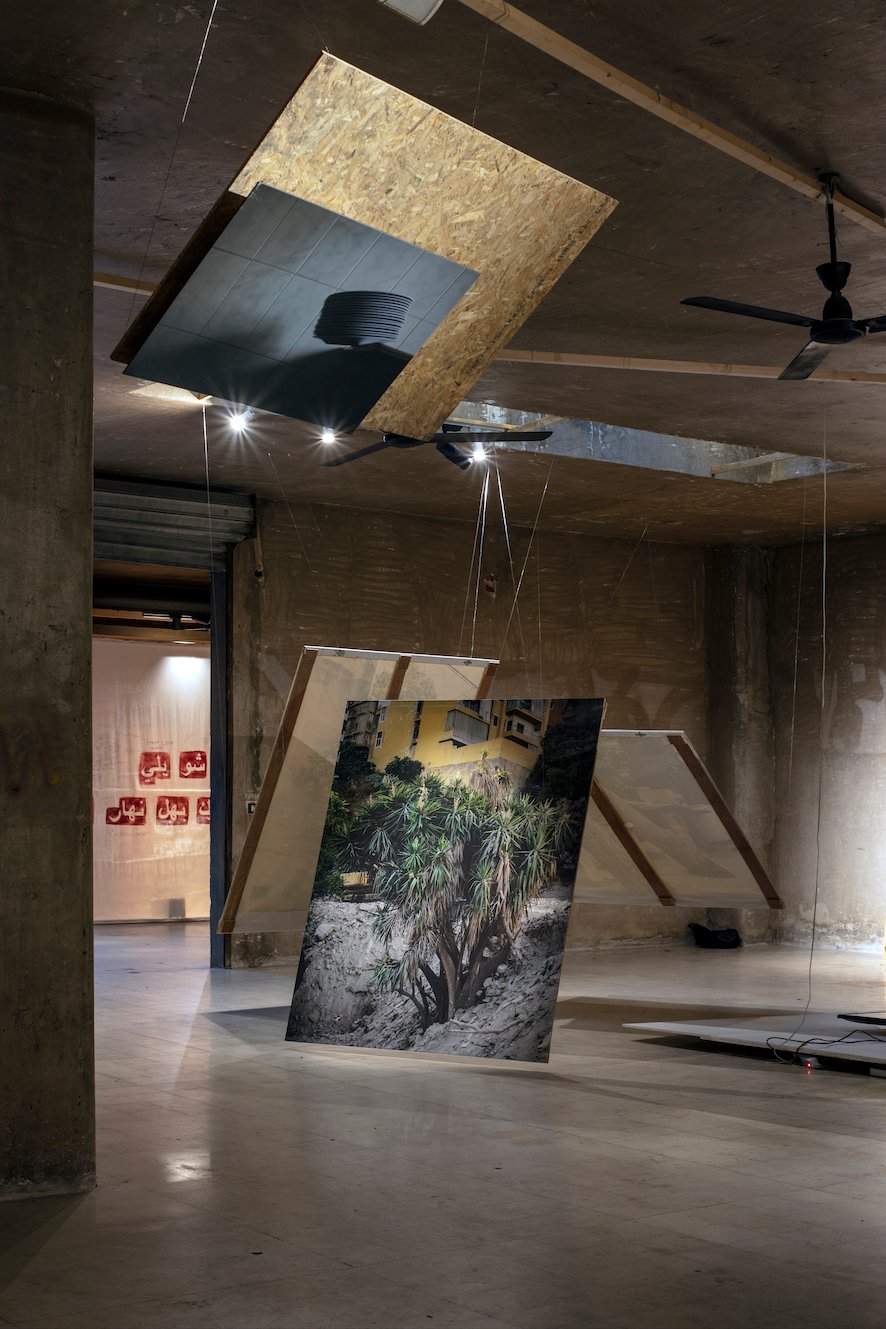 “Beirut is always said to be not green, but I knew from my experience shooting that there are a lot of vertical gardens happening. People plant their balconies. There’s things climbing on walls. I started walking around the city, looking for these spots, and the more I found, the more I became obsessed by it. It became like a way of re-mapping the city through these trees, through growth in general.”

Saudargaité Douaihi had a chance to explore this non-concrete side of Beirut growth during the 2021 cycle of the Arab Fund for Arts and Culture’s Arab Documentary Photography Program. Now in its eighth cycle, ADPP sees AFAC partner with the Netherlands’ Prince Claus Fund and the Magnum Foundation to offer support and mentorship to MENA region photographers in developing their projects.

The 10 series emerging from ADPP 2021 have been corralled under the title “Framing the Personal and the Political.” Executed by photographers in Jordan, Egypt, Libya, Syria and Palestine as well as Lebanon, these projects, as AFAC writes, “document the personal and political fears, anxieties and effects that our built spaces — whether real, imagined, or somewhere in between — can have on dwellers and travelers.” 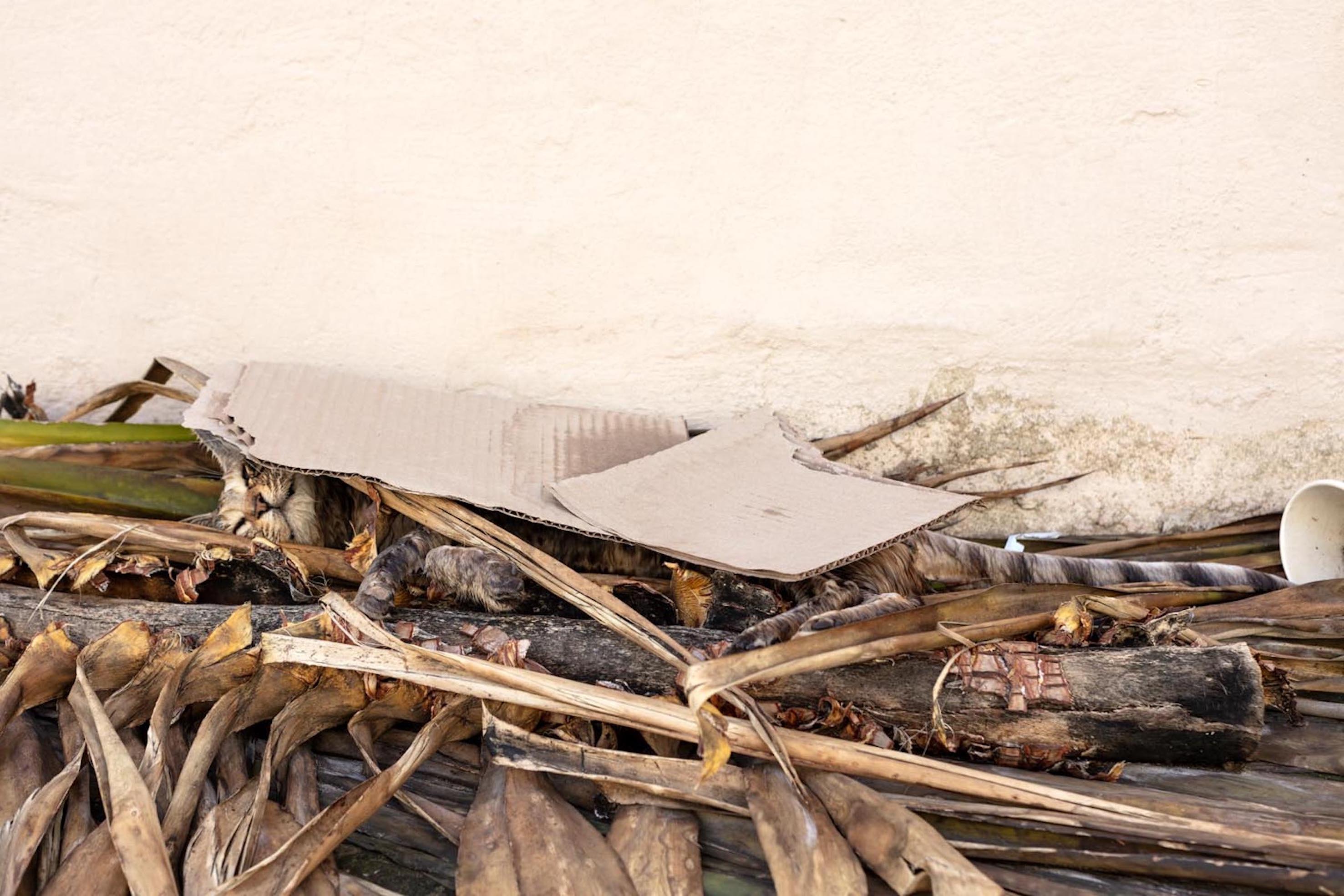 Though there is a good deal of greenery among the 39 stills of Saudargaité Douaihi’s series, titled “my canary sings to me,” her subject matter has diversified to include vertebrates — birds, rabbits, goats, even a human or three — but her eye remains somewhere in the liminal space adjoining portraiture, still life and landscape.

Her ADPP project was originally titled “The Last Garden,” but that name was shed as it developed.

“The premise of it was to look at these natural spaces that seemed to have multiplied after the crisis because the municipality wasn’t trimming trees,” she recalls. “The real estate sector collapsed — at least for a moment — so abandoned lots were overgrowing. I wanted to investigate why this was happening, how it looked. Then it turned into more of a zoom-in on the tensions between these forces — the city, the inhabitants, then nature in the form of plants and animals and elements trying to seep into this urban … whatever,” she laughs, “being.”

The manner in these photos reflects the photographer’s background in architecture. “Most of my work for the last 10 years was shooting buildings and neighborhoods,” she says, “the cityscape.” More generally, though, Saudargaité Douaihi’s practice has grown from her time in Lebanon. 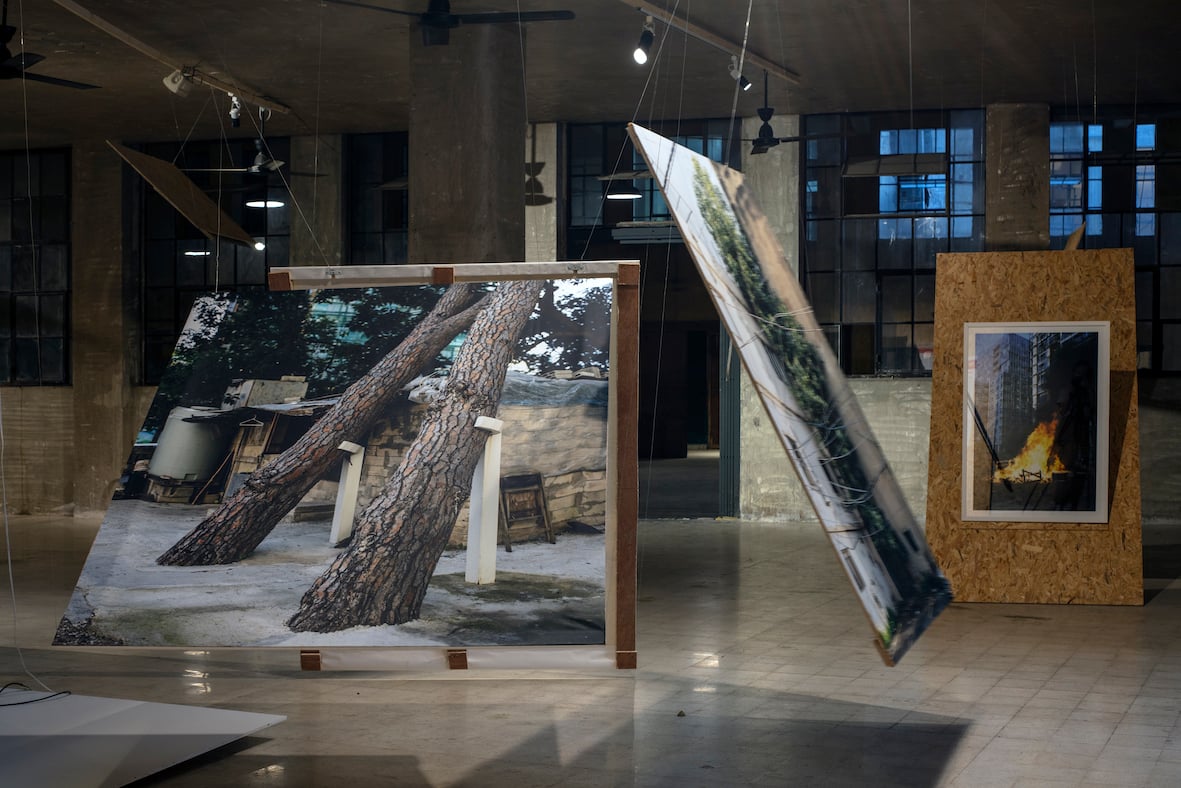 “My relationship with Beirut started with photography,” she says. “I’ve been coming to Lebanon since we were kids, because my stepdad is Lebanese. I have always had a relationship with Lebanon but when I moved here in 2007 I didn’t know very much about Beirut, because my family’s from the north.”

Unlike her tree portraits, many of the subjects in “my canary” are moveable, creating opportunities for set design. Saudargaité Douaihi says she doesn’t stage her photos.

“Even if I had a studio,” she laughs, “I don’t have a studio practice. Everything is what I find.

“It’s a mixture of things,” she says of her practice, “meandering, driving, looking. Sometimes I notice something. Sometimes I’m searching. The method is always looking. Photographing Lebanon is always like an adventure. It takes me out of all the other difficult situations, which is fun. That’s definitely the first part [of the mixture]. 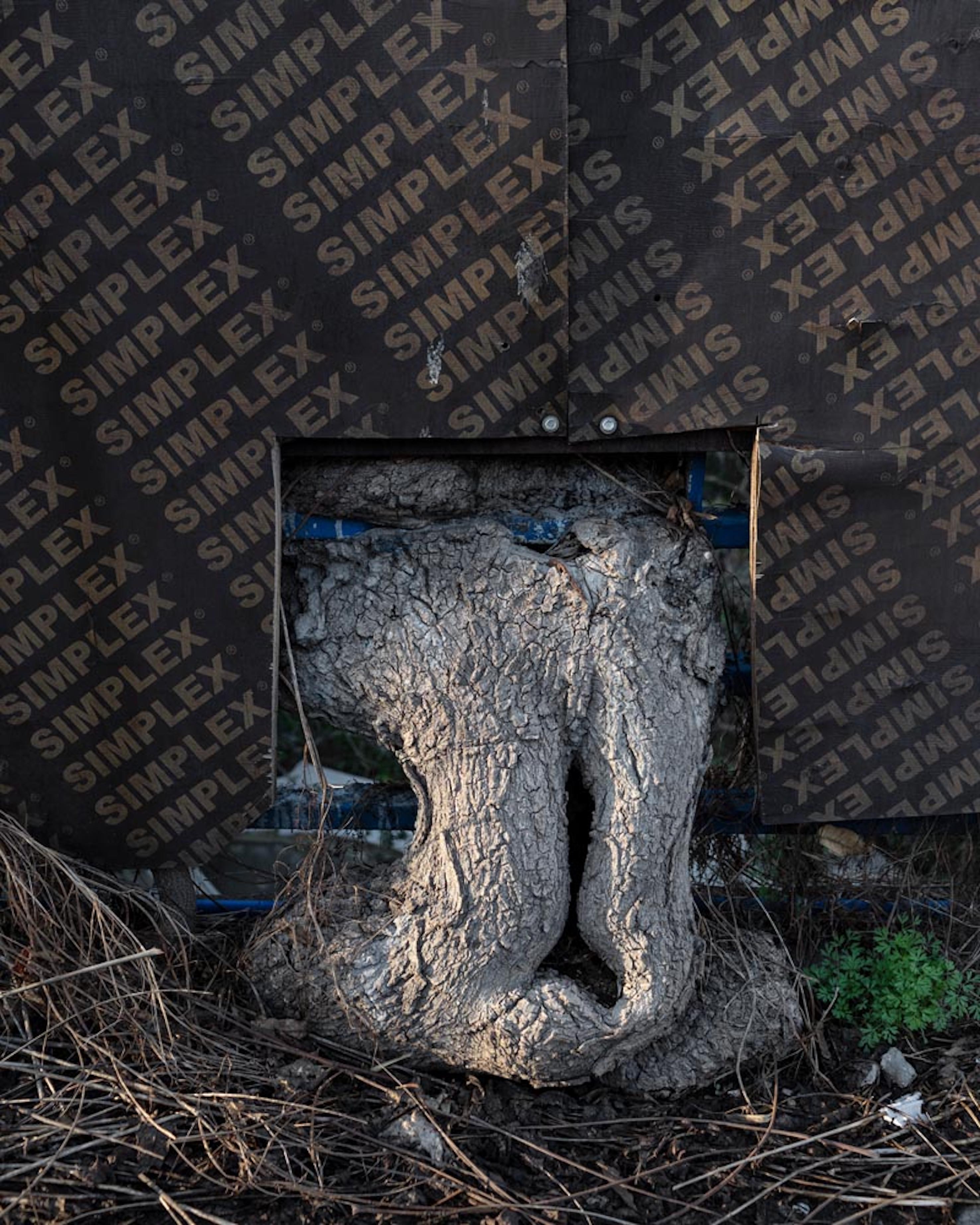 “The second part, I feel, is a search for something familiar, like finding things that I’ve either experienced or that I’m experiencing within myself. So these weird — whatever you want to call them — moments, these contradictions.” She chuckles. “It’s like finding some kind of rapport with whatever you’re seeing —either it’s familiar to you or within you.

“The third component,” she pauses. “I’ve been noticing that a lot of my work has this concern with the environment. I mean, it wasn’t intentional, but I am aware and a little bit afraid that, within my lifetime, the world that I grew up in, enjoying, appreciating, might actually come to an end. It’s kind of scary. So there’s a part of me that’s dealing with that mixture of sadness and anger.”

The stills of the “my canary” series are accompanied by a couple of narrative shards. One of them recounts her exchange with a man shooting birds at one of the locations she was photographing.

“I had been there already a few times,” she recalls. “Those guys knew me, so they felt comfortable enough to,” she pauses, “to do what they usually do.

“I’m not used to shooting people. I’ve been very much this lone … flâneur, just walking around and shooting the city, buildings. I tried to avoid interactions, really, but for this project I wanted to push myself. I tried to talk to people and photograph them, though those pictures didn’t make it” into the series, she laughs, “because I’m not there yet.

“That’s why those interactions felt precious to me. That’s why I’ve included text, to allude to the fact that it wasn’t just me walking alone and observing. I wanted to include their interactions with this place.”

Since the thawra erupted on Lebanon’s streets, Saudargaité Douaihi has involved herself in a couple of group enterprises. One of these is Collectif 1,200.

In early 2020 photographer and Hamana Artist House cofounder Rima Maroun invited Beirut photographers to meet and, as the group has written for a recent show, “reflect and create collectively in the face of the circumstances that have reshaped their lives in Lebanon and made working individually difficult.” Collectif 1,200 has since stabilized at 11 photographers.

“It was like a nice escape from everything that we were experiencing,” Saudargaité Douaihi recalls “something to do besides looking at the news or participating” in the protests.

Some 18 months after the first meeting, Collectif 1,200 was invited to exhibit its work at a festival in Bordeaux. The response, Saudargaité Douaihi says, was positive. More shows followed. The fourth and most recent was “Anatomy of a fall” (Nov. 16-20), staged at Abroyan Factory in Burj Hammoud as part of the British Council’s In Between Festival. 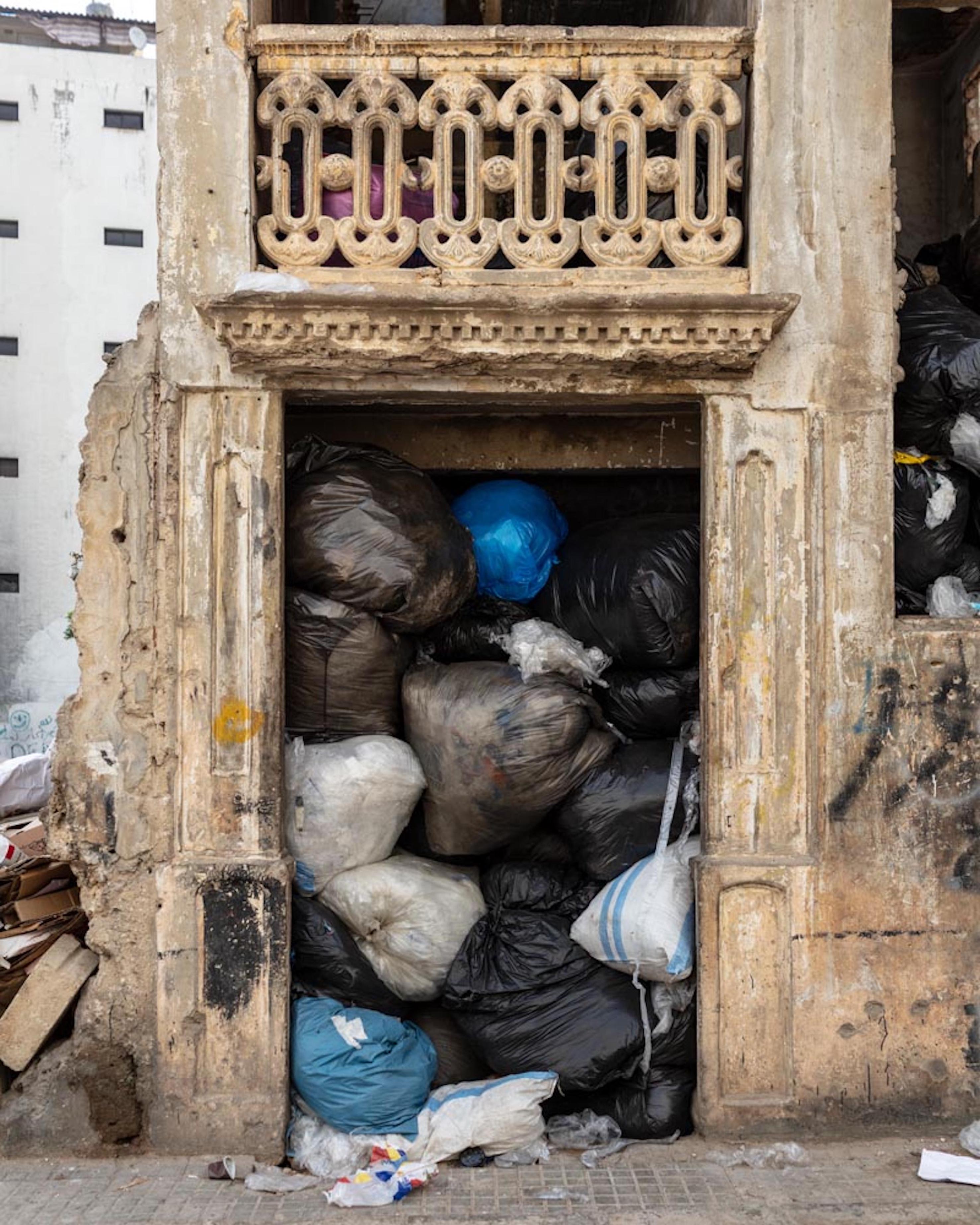 “We started looking a bit more at each project, at how to put them together, so that they feel more like a body of work rather than singular things coming together,” she says. “The collective has also been discussing what our objective is and inviting others to share their stories of working collectively.”

Having exhibited together, Collectif 1,200 is nowadays mulling over their first effort at creative collaboration. “The goal is to set a theme for ourselves and to set ourselves a deadline, maybe a year,” she says. “We’d all use our own different approaches to address a common theme.”

Saudargaité Douaihi’s other project, Digital Fountain, is a distribution initiative.

“Digital Fountain just turned a year old. It’s a website I started with a friend to promote Lebanese photography,” she says. “On one hand it’s a site that groups a bunch of talents into one place as well as putting prints out there for sale.

“It’s something I’d like to grow beyond being just a print shop. I’m going to open up a space in Achrafieh in the next two weeks. For the month of December it’ll be just another pop-up shop for Digital Fountain and maybe some other photographers. Hopefully this space will become more than just a print shop — an exhibition space that will promote photography and maybe even some other visual art.”

Saudargaité Douaihi says the initiative is a response to the crisis that’s been garroting all Lebanese, artists included, particularly since late 2019. At the same time it responds to the challenges local photographers face in distributing and selling their work.

“Beirut has no galleries dedicated to photography,” she says. “Digital Fountain is open to the world.”

BEIRUT — Denizens of Instagram may have encountered the work of Ieva Saudargaité Douaihi through a portrait series she’s shot of notable Beirut trees. The subject is an intriguing one, since the city — that is to say its property developers and their fellow travelers in decision-making circles — has long been notorious for indifference to urban greenery.Saudargaité Douaihi attributes...