A Hezbollah representative recently met with a spokesperson for Maronite Patriarch Bechara al-Rai. 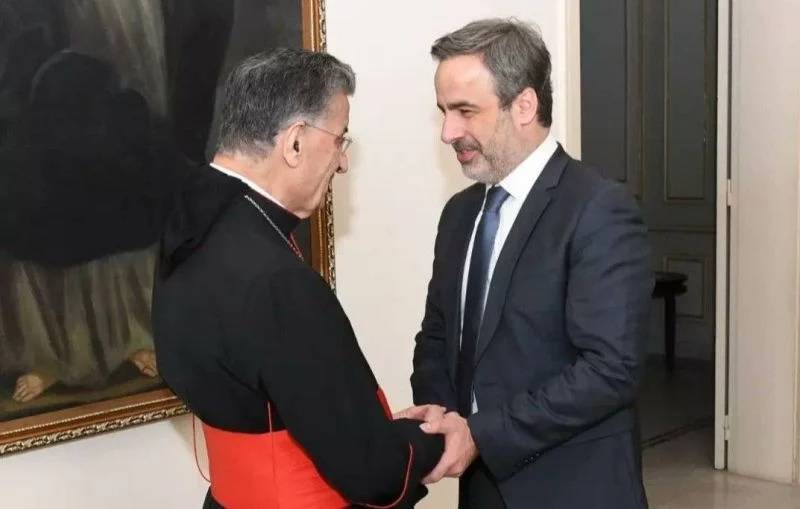 Hezbollah obviously does not want to waste any more time.

A few days after party leader Hassan Nasrallah defined the profile of an ideal future head of state, Hezbollah appears to be actively paving the way to the Baabda Palace for its preferred presidential candidate, Sleiman Frangieh, the leader of the Marada Movement.

This procedure starts with the Maronite patriarchate, the highest Christian authority in the country. The two sides recently held a discussion on the presidential election.

Hezbollah’s efforts come at a time when Frangieh does not enjoy the support of either of the main Christian parties, namely the Free Patriotic Movement and the Lebanese Forces.

About 10 days ago, Mohammad Raad, head of Hezbollah’s parliamentary bloc, said that the party “knows its candidate” and is working to ensure that “this person” ascends to the presidency. Raad’s remarks came after Nasrallah’s speech in which he outlined the profile of a suitable head of state.

“Even if they did not name him, it is obvious that the party secretary-general and Mohammad Raad were talking about Sleiman Frangieh,” a Hezbollah official told L’Orient-Le Jour on condition of anonymity given the sensitivity of the issue.

“It is in this context that we should view the latest meeting between Hassan Nasrallah and Gebran Bassil, as well as the recent meeting between Mohammad al-Khansa, Hezbollah’s representative, and Walid Ghayad, the spokesman for Maronite patriarchate,” the party official said.

The official, however, explained that the meeting between the two — which was held at the home of MP Farid al-Khazen — was not aimed at talking Rai into supporting Frangieh’s candidacy.

“[Frangieh’s name] was mentioned among several other candidates,” the party official said, adding, “We understood from Mr. Ghayad that the Patriarch did not see any problem with Frangieh being elected president.”

The name of Lebanon’s army chief Joseph Aoun, who is viewed as a consensus candidate, was also reportedly mentioned during the meeting.

“We are very clear on this. We have a very good relationship with Gen. Aoun, but we have our own candidate,” the Hezbollah official told L’Orient-Le Jour.

With these remarks, Hezbollah seems to be sending a clear message not only to its opponents but also to its allies, starting with FPM leader Gebran Bassil, which is giving the party a hard time: Hezbollah is not ready to let go of Frangieh, at least not at this stage.

Meanwhile, last week, the army chief met with Wafik Safa, a senior Hezbollah official, in Yarze — a meeting that the party quickly described as reflecting “good relations” with the military institution, in a bid to block any political interpretation with regard to the presidential election.

Bkirki appears to be more ambiguous on the issue.

A source close to Rai, who preferred not to be named, told L’Orient-Le Jour that the meeting with Hezbollah’s emissary comes in the context of what he called “the usual dialogue” between the two sides.

While avoiding making a clear statement about Frangieh’s candidacy, the source said that “Bkirki has no problem with any candidate.”

“What matters to [the patriarch] is the election of a president who would be able to face all the challenges facing the country,” the source said.

Meanwhile, according to many pundits, Patriarch Rai — who not only openly criticizes Hezbollah but also defends Lebanon’s neutrality and the election of a president who is above the political fray — is unlikely to endorse the favorite candidate of the March 8 camp.

This is an observation on which Tony Frangieh, MP for Zgharta and son of Sleiman Frangieh, preferred not to comment. “I don’t think that the names of presidential candidates are already on the table. But we are convinced that Hezbollah is engaged in a process that will benefit us,” he told L’Orient-Le Jour.

In the meantime, Frangieh’s camp, which is led by Hezbollah, continues to stick to the blank vote strategy during parliamentary sessions dedicated to the election of the next president.

MP Michel Moawad, who is the favorite candidate of a large proportion of the opposition, including the LF, Kataeb and the Progressive Socialist Party, continues to struggle to secure the votes of the protest movement and Sunni MPs from Akkar, as well as of the independent MPs.

Moawad, however, is still presenting himself as the unifying candidate.

On Wednesday evening, Moawad met with Rai and said that he “will be the president of all Lebanese.”

He also called on MPs to “respect the constitution and assume their responsibilities in electing a president” — an apparent dig at Hezbollah and its allies whose MPs systematically torpedo Parliament’s quorum at the end of the first round of the voting at each dedicated session, arguing that the election of the head of state should be the result of a broad agreement.

Hezbollah obviously does not want to waste any more time.A few days after party leader Hassan Nasrallah defined the profile of an ideal future head of state, Hezbollah appears to be actively paving the way to the Baabda Palace for its preferred presidential candidate, Sleiman Frangieh, the leader of the Marada Movement.This procedure starts with the Maronite patriarchate, the highest Christian...